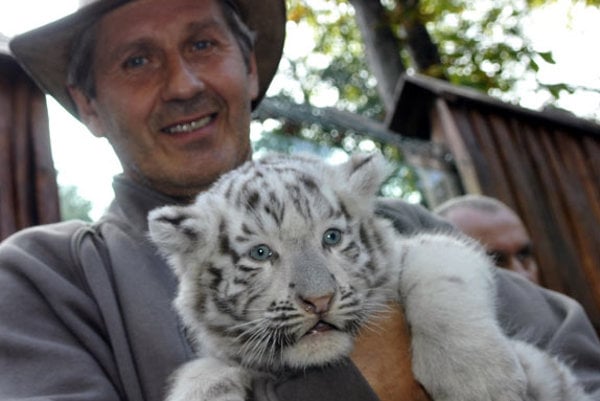 The 7-week-old 'kittens' – Samir (which means 'breeze' in Sanskrit) and Suria (which means 'the sun') – attracted dozens of families to the zoo in the capital, the SITA newswire wrote.

The tiger cubs’ 'godparents' are Valentín Mikuš, director general of waste-disposal company OLO; Ján Králik, a member of the board of directors at OLO; and famous actors Lenka Košická and Ján Kroner.

Before the ceremony, Miloslava Šavelová, head of Bratislava Zoo, wished the tigers good health and promised to keep them in Slovakia for at least a year.

“For now they will be monitored here and later we will move them to another zoo as part of the European zoo animal exchange programme,” she explained.

The cubs’ keeper said they’ve been with their mother since birth.

“They like milk the best, but they have already tried eating some minced meat,” the zookeeper said.

Košická wished the small tigers a lot of love and care as Kroner and she gave them a chew toy as a present.

The zoo organised a number of interesting events for families on October 11.

Children had the chance to handle a snake, watch zookeepers feed lemurs, learn about chimpanzees, or ride ponies.