AN EXCAVATION near the St Nicolaus Dome in Trnava has uncovered the foundations of the town’s oldest sacred building. 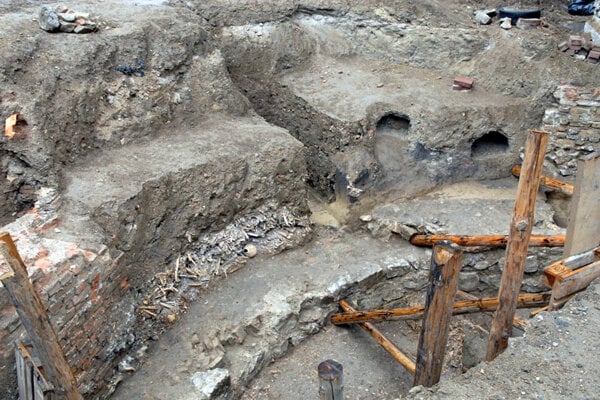 AN EXCAVATION near the St Nicolaus Dome in Trnava has uncovered the foundations of the town’s oldest sacred building.

A monumental stone rotunda with a 7.6-metre radius was found six metres below the eastern side of the dome. According to archaeologists, this is not the St George Rotunda, as was originally thought, but probably the rotunda of St Michael's Church, the SITA newswire wrote.

“The proximity of the St Michael Church, which was supposed to have been built after the rotunda had been destroyed, confirms this hypothesis,” said Erik Hrnčiarik, from the School of Classical Archaeology at Trnava University, who headed the excavation.

The archaeologists had originally sought to uncover the Romanesque St. George’s Rotunda, which was mentioned in documents dating back to the 18th century.

“It was probably something made up by a historian,” Hrnčiarik said.

Following the documents, archaeologists originally searched for the rotunda on the other side of the church, where a former sacristy had been. The rotunda, which is one of 19 in Slovakia, was lost in 1360, but the date of its foundation has not been fully agreed upon.

“We suppose the building was created at the same time as the St Nicolaus Dome in the 11th century, but according to other findings, it is possible that it was built during the period of the Great Moravian Empire,” Hrnčiarik said.

The research uncovered other interesting findings.

“We discovered 166 graves with skeletons and parts of three foundation brickworks in architecture so far unknown,” Hrnčiarik said.

The graves, which date from the town’s beginnings to the 18th century, when Emperor Joseph II forbade burials near churches, held various items, especially fabrics.