SOME Slovaks have already started preparing for the new currency by buying new wallets that contain special pockets for euro coins. 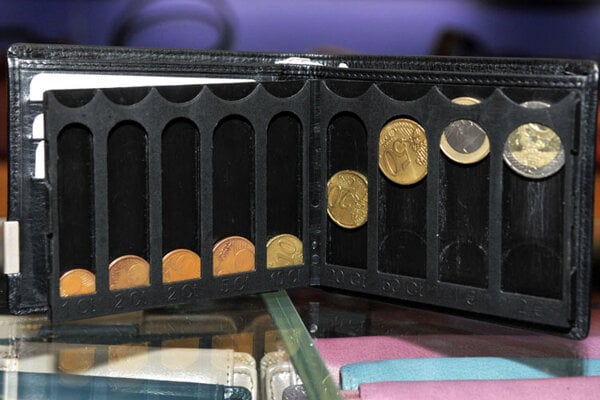 SOME Slovaks have already started preparing for the new currency by buying new wallets that contain special pockets for euro coins.

A poll by the ČTK newswire showed retailers expect that interest in euro wallets will increase dramatically before Christmas, so companies and advertising agencies are placing orders now.

“Now, it's mainly firms that are ordering them, to attach a logo or give them to clients or employees,” Paul Kindji, a sales representative from Abome, told ČTK. “They are probably preparing them as New Year’s or Christmas presents.”

The new type of wallets helps save time while paying, Kindji said. He also noted that euro coins are heavier than Slovak crowns and hellers.

Abome, which imports the wallets from abroad, is also offering products designed especially for waiters.

The increasing interest in euro wallets was also confirmed by the companies René Plus and Tatrawood.

“Interest has grown enormously and I think that it will culminate shortly before Christmas,” Tatrawood’s owner Roderick Ledecký said.

As well as its own shopping sites in Bratislava, Prievidza, Poprad, and Piešťany, the company also supplies other sellers, which have been receiving orders from haberdasheries, shoe shops, watchmakers, pharmacies and key services, among others.

“We have pouches for euros with the symbol of the currency,” a shop assistant in a specialised shop on Hlavná Street in Košice told ČTK.