Rómeo’s flight comes to an end

RÓMEO, a young saker falcon, was recently found dead near the Russian village of Umet. Slovak and Hungarian ornithologists had been tracking the bird through use of a transmitter. 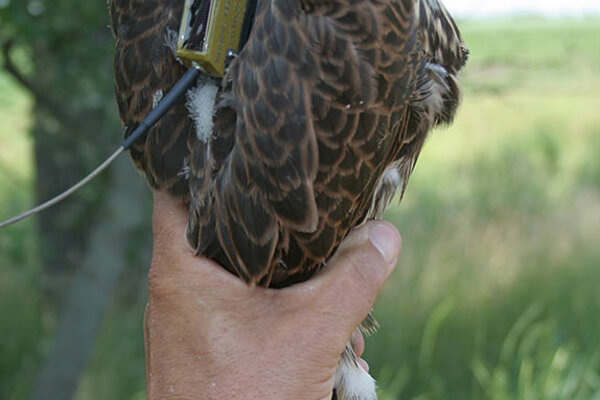 Rómeo was wearing a transmitter like this one. (Source: SITA)
Font size:A-|A+  Comments disabled

RÓMEO, a young saker falcon, was recently found dead near the Russian village of Umet. Slovak and Hungarian ornithologists had been tracking the bird through use of a transmitter.

The falcon was probably electrocuted after landing on overhead power lines, the SITA newswire wrote.

“The falcon was one of 19 juveniles that were equipped with satellite transmitters by Slovak and Hungarian experts, who tracked their migration in order to learn new information necessary for protecting this endangered predator,” Marek Brinzík from the Protection of Predators in Slovakia association told SITA.

Rómeo was equipped with the transmitter on June 10, 2008 by experts from the Birdlife Hungary organisation and the Fertö-Hanság National Park. He flew to Austria, Slovakia, Ukraine and Moldova before his unfortunate demise.

“Near the end, he crossed the Ukrainian-Russian border near Kharkiv,” Brinzík said. “He was about 200 kilometres from Moscow, then headed south-east. The last signals from his transmitter came in mid-September, and showed he was in a field not far from Umet. It was there that Russian ornithologists found him.”

“In Slovakia, two female falcons, Viera and Romana, have also been equipped with a satellite transmitter,” Brinzík continued. “They have managed to stay out of danger so far.”

The saker falcon population is stable in Hungary, Slovakia and Serbia, but has been on the decline globally, Brinzík said.

“The falcon population in the Carpathian Basin region is of great importance to Europe and the world because it allows the species to grow and expand,” he said.