How a former PM paid for his villa

For years, Vladimír Mečiar refused to explain how he had financed the construction of his multi-million crown Elektra villa in Western Slovakia’s Trenčianske Teplice. He even once notoriously punched a journalist for JOJ television who asked him about it. But according to documents recently obtained by Spex, it is clear that Mečiar was helped in repaying a loan by those whom he in turn had helped to become wealthy. 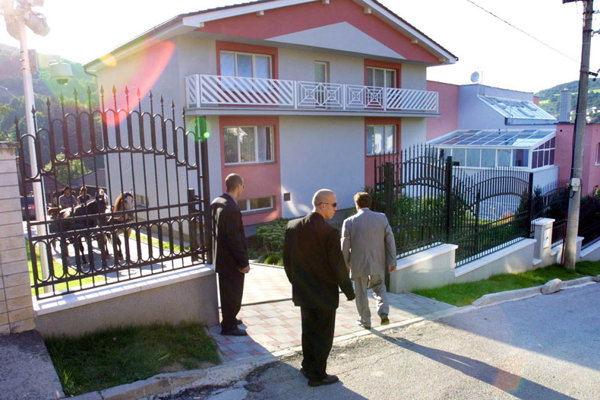 For years, Vladimír Mečiar refused to explain how he had financed the construction of his multi-million crown Elektra villa in Western Slovakia’s Trenčianske Teplice. He even once notoriously punched a journalist for JOJ television who asked him about it. But according to documents recently obtained by Spex, it is clear that Mečiar was helped in repaying a loan by those whom he in turn had helped to become wealthy.

As it turns out, Mečiar took care of his debt for the reconstruction of his Elektra pension (pictured at top right) in 2005, with the help of a company whose owners include Poprad strongman Ondrej Žemba and two men who profited from the dubious transfer of state land under the High Tatras mountain range last year.

According to the documents, Margita Mečiarová, the wife of the former prime minister, bought a 10% stake (100 shares) in the Trend Tatry joint stock company for Sk1 million on April 4, 2005. The seller was Július Rezeš, the son of a former business mogul and cabinet minister in the third Mečiar government, Alexander Rezeš. The money paid represented the face value of the shares.

Three months later, on June 9, 2005, Margita Mečiarová sold the same shares to the Paola Properties company of Gibraltar. According to a source with knowledge of the transaction, the sale price was Sk60 million; most of it, or Sk48 million, was offset against the debt that Mečiar owed for Elektra to the same company and its owner, Peter Ziegler. Another Sk12 million was paid in cash so that Mečiar would have enough to pay the taxes due on the lucrative share sale.

The actual sale bears a clear resemblance to the story that Mečiar told the press on September 20, 2005 – a day after the share transfer was recorded in the books of the Central Depository of Securities in Bratislava. “Everything has been paid off, and something was even left over,” he said. Mečiar claimed that the loan had been paid off in a single transaction, not with cash but by using his wife’s ownership rights to an unspecified asset. He added that the following year, he would pay off the taxes due on the transfer.

I know what you want

It is not clear whether the tax dues were ever paid. When Spex put the question to Mečiar after a press conference in Detva on September 27, the former PM refused to comment. “I know what you want to write about, I’m well-informed,” he said. “You want to write about that house I bought.” He then walked off.

But a former founding shareholder in Trend Tatry, Milan Bališ, confirmed the transaction for Spex. “This story was told to me by the parties to the sale,” he said. During the 1990s, Bališ served as security for the Rezeš family and the VSŽ steel mill.

The buyer of the shares, Peter Ziegler, appeared in Bratislava in 2002 in the company of Bališ to announce that he had lent the money to Mečiar to build Elektra. He claimed to have lent Mečiar “more than Sk41 million and less than Sk100 million” in Swiss francs in 1999.

“Elektra is not an investment, it’s speculation. You have to put your money into something,” he said in an interview at the time with the SITA news agency.

Since that time, Ziegler has not been seen again in Slovakia. For that reason, it proved impossible to discover if the transaction with Margita Mečiarová had been an advantageous one for him, and if it had been arranged before hand with the shareholders of Trend Tatry. It is interesting, however, that SITA was put in touch with Ziegler by the Roko advertising agency, which worked for VSŽ during the Rezeš era. The chairman of the board of Roko, Peter Kuba, is also the chairman of the board at Trend Tatry. Spex was unable to reach Kuba for comment.

Trend Tatry was founded in 2001 by Ondrej Žemba, Július Rezeš, Milan Bališ and Gabriel Vysaník, with each holding a 25% stake.

Vysaník was on the election team of Mečiar’s HZDS party before 1998 elections, and was the party’s district chairman in Kežmarok. He also worked for the ARDS company, which is close to the Rezeš family. He and Milan Bališ are currently the co-owners of the GVM company, which last year gained more than a million square meters of land in the High Tatras in the municipality of Veľké Slávkove. The company paid less than Sk13 million for land that was valued by the local mayor at over a billion crowns. The transaction was made possible by the signature of Branislav Bríza, the HZDS nominee at the Slovak Land Fund (SPF). The SPF, in turn, falls under the authority of the HZDS-controlled Agriculture Ministry.

Vysaník did not react to a request for comment that Spex left with his daughter.

Žemba, meanwhile, is a former body builder whom police believe to be a major figure in the Slovak underworld. He was convicted of extortion in the past, and has also been charged with fraud. He did not answer his cell phone.

At first, the owners of Trend Tatry intended to operate a water purifying plant in Poprad, but the project fell through. Later they bought about 50 hectares of land in the High Tatras from the bankrupt Tatra – Thermal, a daughter of the BMG Invest pyramid fund.

In 2004, according to the source close to the transaction, the owners of Trend Tatry agreed to help Mečiar settle his Elektra debt, and it was arranged that Rezeš would sell Margita Mečiarová 10% from his share. Rezeš currently sits on the supervisory board of the Transpetrol oil pipelines company as a nominee of the HZDS.

Bališ, however, denied knowledge of any such arrangement.

After Ziegler’s Paola Properties bought the shares, the company was liquidated, and the shares were sold on to another international holder. The four original shareholders in Trend Tatry also got rid of their stakes last year, and today the company is exclusively in the hands of unknown foreign owners.