The age-old rivalry between Western and Eastern Slovakia always ends in a draw, and the hotel business is no different. A year from now, one five-star hotel will have opened in the capital, while another one will adorn the High Tatras. A number of other high-end projects are being prepared across the whole country, with no area suffering from lack of interest. 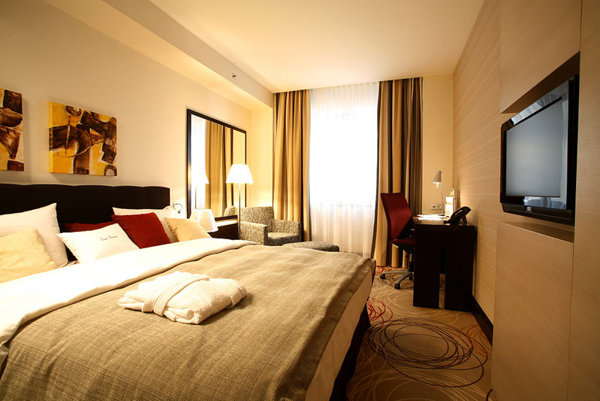 The age-old rivalry between Western and Eastern Slovakia always ends in a draw, and the hotel business is no different. A year from now, one five-star hotel will have opened in the capital, while another one will adorn the High Tatras. A number of other high-end projects are being prepared across the whole country, with no area suffering from lack of interest.

It may look like tit-for-tat, but experts say that each project has its own unique characteristics that draw from the country’s diverse geography, history and social background. For this reason, the trends that have driven the hotel market in the West of the country have largely not been part of the hotel story in Košice and Prešov regions.

“As far as business hotels are concerned, Eastern Slovakia has seen less development to date because it has not seen the same kind of investment capital inflows [as Western Slovakia],” said Jozef Bendžala, president of the Slovak Hotels and Restaurants Union. “However, this is not true of the city of Košice, where the hospitality industry is seeing long-term positive growth, nor to the leisure hotel sector, whose main advantage in this part of the country is the proximity of extremely attractive natural treasures.”

Košice and Prešov are indeed far closer than Bratislava to such popular holiday destinations as the High Tatras mountain resort and the Slovenský Raj (Slovak Paradise) park.

Bendžala said the greatest challenge for hotels in Košice and Prešov regions was now to fully develop the new hospitality products that have appeared over the last decade in more advanced markets.

“If a hotel wants to be successful, it has to stay in tune with the times,” he said. “People are now working more than they used to and have less time for relaxation, so hotel stays have become shorter but more intense. That’s why congress and wellness facilities are now so highly sought after.”

Bendžala added that while tourism in Eastern Slovakia held enormous promise, as in the rest of the country, the industry could not flourish without strong state support.

“The Slovak hotel business needs a subsidy program similar to the one that was adopted for the manufacturing industry, because our natural surroundings will be around far longer than factories,” he told SPEX. “There have been a few minor efforts to boost the sector, but none of them have ever taken a systematic or a global approach. This has to change if we want our tourism industry to become really competitive with that in Alpine countries, for example.”

Given that building and operating a hotel involves a considerable expense, hotel owners naturally strive to recover their initial investments as soon as possible. One of the most common ways to make a hotel competitive from the moment it opens is to belong to a well-known international network.

“In those countries where the hospitality industry is well advanced, these chains have been around for a long time,” said Ivona Meissner, member services manager in Central Europe for the Best Western international network. “Such memberships enable hotel operators to achieve good occupancy rates and high turnover much easier and faster than on their own. Moreover, the global distribution and booking systems of these large chains ensure that more foreign visitors find out about the hotel. For a no-name company, the costs of advertising, marketing and surveys are usually out of reach.”

According to Meissner, Slovak hotels have lately started following this trend as well.
“In the past, there was relatively little demand, and it was generally covered by the existing establishments,” she told SPEX. “Now, more and more international networks are being attracted to the country.”

This is not just true of Bratislava, with its Holiday Inn, Best Western, and coming Sheraton and Kempinski projects, but of Eastern Slovakia as well, where dozens of similar chain hotels can now be found. The management of the recently renovated Best Western Karpatia Hotel in Humenné, which caters with different types of rooms to both business and leisure travellers,
expressed their belief that international networks are the best option for hotel operators.

“Membership in a worldwide chain is advantageous not only for the establishment itself, but also for its regular guests, because they can avail themselves of various discounts or small presents,” Anna Sivčová from the Karpatia Hotel remarked.

She also said that the hotel industry in the east of the country is experiencing an unprecedented boom, which is due mainly to the economic growth of the region.

“More and more we are seeing investors creating industrial parks and thus reducing the unemployment rate,” she told SPEX. “This is significantly contributing to the development of hotel services in Eastern Slovakia.”

In Sivčová’s view, however, stronger leadership could lead to an even more rapid expansion of hospitality facilities across country.

“The Slovak hotel market lacks an important leader to dictate trends in the sector,” she said. “While in more developed countries tourism has been influenced mainly by large companies or agencies, Slovakia’s hospitality market tends more to be shaped by small firms and European regional development projects. As a result, there is an immense number of establishments that want to survive, but nobody actually knows how to.”

The more stars the better

Even top-quality hotels prefer to have the name of a world-renowned international brand above their entranceways. Eastern Slovakia will soon boast the presence of several establishments that belong to top-end chains – the five-star Grand Hotel Kempinski High Tatras will be erected in the country’s highest mountain range, while Košice’s four-star hotel market will see new additions in the form of the Doubletree by Hilton and the Yasmin, which is under Quinlan Private, an Irish private equity group.

“We are convinced that our investments have come at the right time,” said Denisa Šerfelová, a spokeswoman for J&T Real Estate, developer of the Doubletree by Hilton as well as of both of Kempinski’s Slovak projects. “Slovakia will no longer lack first-rate services.”

Rozwitha Kováčiková, marketing and sales director of the Yasmin hotel, which is scheduled to open with 169 rooms and suites as early as this winter, agrees.

“Customers are now getting more and more demanding, because a lot of foreign businesses have recently been coming to Eastern Slovakia,” she told SPEX. “So far, Košice has not had adequate accommodation, restaurant and conference facilities. That’s why we decided to fill this gap with a modern hotel that provides a high standard of customer care.”

Kováčiková added that the development of the local hotel market will – like a virtuous circle – contribute to further economic growth and the improvement of the standard of living in the region.

“When we were launching the project, there was a shortage of qualified labour in Eastern Slovakia,” she told SPEX. “As we started to create job opportunities, dozens of people who had left the country for better pay came back. This will doubtless continue.”

Both workers and travellers will soon have at least two newly opened hotels to choose from in Košice. From its opening, the Yasmin will face competition from another four-star giant that will accommodate guests in 170 rooms and suites from December 2008.

Marek Harbuľák, executive director of the Doubletree by Hilton, said that he was not afraid of a lack of visitors.

“After we closed the former Slovan hotel to launch its renovation, the demand for four-star hotel services hugely exceeded the supply in Košice,” he told SPEX. “Such a high number of discerning customers can be explained by the industrial development that is going on here and the attractiveness of the region.”

Like other hospitality industry experts, Harbuľák considers Eastern Slovakia a promising market, but stresses that unless the state’s overall approach towards tourism in Slovakia changes, the results will not be satisfactory.

“There is a long way to go before Slovakia becomes a really successful and popular tourist destination for travellers from around the world,” he observed. “We have the potential, but not the kind of promotion we need. Slovak natural treasures, spas, ski resorts and water parks need effective advertising, otherwise we will always be lagging behind our neighbours in other countries.”

Harbuľák said that apart from these global factors, many specific individual qualities also contributed to the success of a country’s hospitality industry, and should not be neglected by hotel operators or managers.

“Success depends to an enormous extent on personal engagement,” he said. “It’s extremely important what kind of attitude the staff have towards their work. If they enjoy their jobs and have good working conditions, this will undoubtedly be reflected in how they perform their duties as well as in the how they treat the customers.”

(See also related articles:Where have all the tourists gone? and Bratislava will not suffer Prague’s fate).