Where have all the tourists gone?

George W. Bush once got Slovakia and Slovenia mixed up. Infamy, in Bratislava and Ljubljana, but understandable elsewhere in the world, where these two benign, pretty countries must compete with the Alps, the Amazon and the Eiffel Tower for a place on the tourist map. 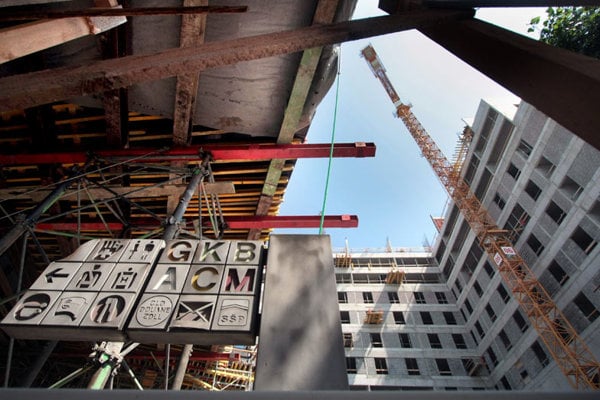 Construction on J&T’s River Park continues, as do worries about the amount of new projects coming to market. (Source: SITA)
Font size:A-|A+

George W. Bush once got Slovakia and Slovenia mixed up. Infamy, in Bratislava and Ljubljana, but understandable elsewhere in the world, where these two benign, pretty countries must compete with the Alps, the Amazon and the Eiffel Tower for a place on the tourist map.

The Slovak capital (pop. 450,000), while immeasurably more attractive than when the Communists handed it over in 1989, is merely “cute” by comparison with nearby Prague, Budapest and Vienna. The High Tatras mountains, while dramatic, stretch for barely 50 kilometers; the highest peak, Gerlach, is fully 2,000 meters short of Mont Blanc. And so on.

Small wonder, then, that after a blip following Slovakia’s EU entry in 2004, when investors and curious Europeans came to take a look at one of the Union’s newest members, tourism figures dipped in 2007. In the first quarter

“These survey results, in my opinion, show that something is changing, and should be taken as some kind of warning,” said Michaela Grančičová, general manager of the renovated four-star Apollo hotel on Dulovo námestie close to the Old Town. “The important thing is that we are not only seeing lower occupancy, but also a falling average price billed for each room.”

“It’s clear that Bratislava has a problem,” agreed Tomáš Hasala, owner of the Limba travel agency in the capital, which books Slovak holidays for foreigners. “There are too few rooms on the market, which means that hotel prices are at least 30 percent too high, on a level with Vienna or Prague. But Bratislava, while it has a lot of potential, doesn’t have as much to offer as Vienna or Prague.”

Hasala’s claim that Bratislava is simply not attractive enough to justify such high prices is confirmed by hotel managers themselves. “It’s a generally known fact that accommodation in Bratislava is still more expensive than that in nearby Vienna, for instance,” said Michaela Grančičová, general manager of the renovated four-star Apollo hotel on Dulovo námestie close to the Old Town. “Prices are starting to even out, but when you take into account its congress and other possibilities, together its name as a destination, Vienna is often more attractive to potential visitors.”

With tourists starting to give Bratislava hotels a miss, preferring to visit Slovakia on daytrips from Vienna or Budapest instead, others further down the hospitality food chain are starting to feel the pinch as well. Charles Sebesta, a British expat who owns two upscale restaurants in Bratislava’s Old Town with his wife, says that he has begun thinking up excuses when guests ask why the streets are so empty. “I tell them that Slovaks tend to go away on the weekend,” he says. “The reality is that there just aren’t enough people visiting”.

So what can be done? For Hasala, part of the problem is already solving itself, as over a dozen new hotels are either under construction or on the books, which will inevitable cut room prices and make the city more competitive. “We also have to realize that most tourists come to Slovakia from neighboring countries like Poland and the Czech Republic. Slovak tourism officials have always dreamed of attracting visitors from Germany, France and other Western countries, but they should make sure they have branches in every Polish regional city before opening an office in Paris.”

Meanwhile, the opening of several new five-star hotels in Slovakia, including two by the Kempinski chain, promises to attract more affluent visitors who until now have been lodging in Vienna, only 60 kilometers to the west.

“With the Kempinski River Park in Bratislava, as of next summer we will get business travelers back to the Slovak capital,” said Konstantin Zeuke, Kempinski’s boss in Slovakia. “They will no longer have to travel back and forth from Vienna to Bratislava during the week because they can only find five-star quality in Austria.”

For Grančičová, however, the answer to the problem is not merely to bring more projects onto the market, but rather to reduce costs.

“New investors used to dream of high occupancy rates and low wage costs [in Slovakia], but those belong to the distant past,” she said. “What worries me is that accommodation capacity is being added to the market in leaps and bounds, and many of the larger hotels are reacting to the lower occupancy rates by offering drastic price cuts. That spoils the market, and it’s exactly what happened to Prague, where today they are talking about a crisis in the hotel market, and average occupancy and average billed prices have fallen by dozens of percent, at the same time as costs are rising.”

Restaurant owner Sebesta ascribed part of the problem to the fact that fewer potential foreign investors are finding their way to Bratislava, where wages are already nearing EU levels, and skilled labor is scarce. In the past, such investors would book dozens of hotel rooms a year and would tend to eat out at upscale restaurants. But that trade is now giving the capital a bypass for destinations further east like Košice, Slovakia’s second-largest city, 450 kilometers from Bratislava.

Grančičová agreed. “In the past few years, many foreign firms that were of key importance to Bratislava hotels have wrapped up their projects in Slovakia.”

At the same time, she said, Bratislava City Council and the national government could do a lot to help by promoting Slovakia as a destination and helping hotels to weather the lack of business travelers with an influx of tourists and leisure guests.

“We need to create an interesting tourism product that would attract a more solvent clientele. But what we are seeing in terms of promotion is long-term, and will have results only in the coming years, while today’s reality is that tourism indicators are falling. Still, hotels themselves can help by reducing costs and doing as good a job as they can of selling their products.”

Meanwhile, in the Tatras…

While everything may be doom and gloom in Bratislava, developers in Slovakia’s High Tatras mountains are licking their chops at what they believe will be an attractive product for wealthy travelers looking for a niche destination.

Kempinski’s other five-star project in Slovakia, the Grand Hotel in the High Tatras resort town of Strbske Pleso, was scheduled to open in October 2008. The chain is partnering with J&T, a Bratislava-based capital group, which is developing ski runs and four hotels in the mountains as part of a 250 million-euro project that should be finished by 2011.

“The High Tatras offer very good recreational facilities and beautiful mountains and lakes, but it’s a niche destination and needs to be promoted more worldwide,” Zeuke said, adding that Kempinski would use its own channels to “bring a new customer mix to the High Tatras from countries like the US, Russia and Germany.”

J&T founder and partner Patrik Tkáč said that the small size of the mountains, and their proximity to the airport at Poprad that has regular flights from London, increased their attractiveness for travelers looking for convenience.

“You can sell the Tatras,” he said. “Nowhere in Europe is there a lowland airport so close to an alpine mountain chain. You can be at your hotel in 15 minutes, whereas in the Alps you may have to drive for an hour or more. Our plan is to rebuild the Tatras, or perhaps to reclaim them from the ashes.”

But whether they’re selling a mountain getaway or a city stopover, pitching to a Polish backpacker or a Parisian jetsetter, tourism professionals agree on one thing – little help can be expected from politicians, at home or abroad.

“We don’t want government support,” Tkáč said. “It’s enough if they don’t do anything to hinder us.”