Director Juraj Lehotský’s Slepé lásky (Blind Loves) has been selected by the Slovak Film Academy to represent Slovak cinema at the 81st Oscar awards in Los Angeles in February 2009. 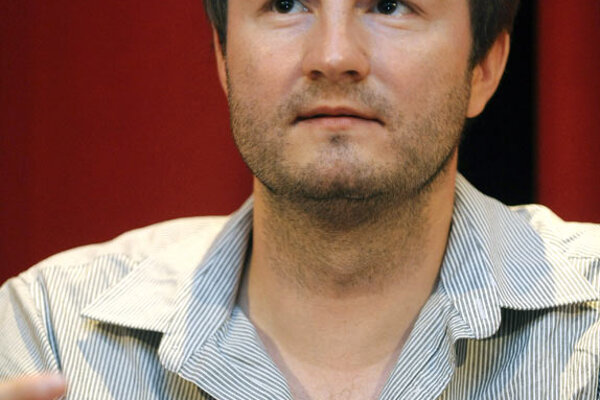 Director Juraj Lehotský’s Slepé lásky (Blind Loves) has been selected by the Slovak Film Academy to represent Slovak cinema at the 81st Oscar awards in Los Angeles in February 2009.

The documentary about the lives and loves of blind people was screened at this year’s film festivals in Toronto and Cannes, where it won praise for its honesty, its cinematic beauty, and its emotional impact.

Its fate at the Academy Awards, however, depends as much upon its inherent qualities as on the amount of lobbying its backers can muster.

“Films need promotion, and promotion is created by every award, every news report, every interview, including the one we are doing today,” said the producer of Slepé lásky, Marko Škop.
This logic is twice as true of foreign-language films, which traditionally are a tough draw in US cinemas. However, after this year’s international screenings, Škop said he was confident that Slepé lásky would be generating a buzz in America by the time the final five films were selected on January 22.

“At Cannes, Variety film critic Alissa Simon came up to us. The Palm Springs film festival has a section for films that countries have nominated for the Academy Awards, and she is in charge of selecting them. She said that she would certainly include Slepé lásky in the roster. We now meet the qualifications, so we’re looking forward to Palm Springs a lot.”

One of the main factors in the fate of Slepé lásky will be whether it is already in US cinemas at the time the judges are deciding.

“Foreign-language films have a tough time in America,” the producer said. “But at the Toronto film festival we saw that Slepé lásky has an emotional resonance with the North American public. After Cannes, we started negotiations with a variety of distribution companies, and Juraj and I took part in a few business meetings in Toronto, even though our agent is handling most of it. We have to weigh everything very carefully, because we only get one shot.”

Slepé lásky premiered in the Czech Republic in September; its Prague distributor staged special screenings for blind filmgoers as well, underlining the unique nature of Slepé lásky. Škop is not expecting the same special treatment in the US.

“The director will definitely be there for the premiere, and will answer questions for the media. But we won’t be staging any big rock concerts around it,” he said.

Now he can laugh

It is not long ago that Slovak cinema won a major award, an Emmy in 2002 for Sila ľudskosti (Power of Good) by director Matej Mináč.

The film told the story of Nicholas Winton, who during the Second World War saved the lives of hundreds of Jewish children by sending them to stay with British families. If not for Mináč, the world would still not know about Winton’s efforts, even the children themselves. The documentary understandably caused a stir, and was given a “TV Oscar”, as the Emmy is known.

Mináč laughs when he looks back on the event. “I still don’t get it. When I was working on the film with fellow scriptwriter and editor Patrik Pašš, all we were thinking about was ensuring that Winton’s story would not be lost. Suddenly we found ourselves standing in front of audiences and following with amazement what was becoming of our film.”

In order to qualify for the Emmys, the documentary had to fulfill the condition that it had never been broadcast on television, even in Slovakia. As a result, the makers of Sila ľudskosti had had few reactions or audience responses to their work. “There were a thousand films entered. Even when we made the finals, among the final four films, we didn’t think anything of it. Everyone was saying you need lobbying to win, and we didn’t have any. And we were competing with projects from powerful global TV networks, which had huge resources for lobbying. So we were a hundred percent convinced, a million percent convinced, that we wouldn’t win.”

Mináč and Pašš were even more sure they wouldn’t be going home with an award when they were seated right at the back of the audience. “It didn’t bother us, we were just happy to be there, and we said to each other that at least we can relax and enjoy it,” said Mináč. “So when we suddenly heard them call out ‘Power of Good’ and call us up on stage, we froze, we couldn’t react. You can see it in the video footage. The prize was given away by the actress from Sex in the City – for a moment, she had to be wondering where the hell we were.”

But the success of Sila ľudskosti didn’t stop there, said Mináč. Nicholas Winton was decorated by the US Congress and Queen Elizabeth. “British children learn about Winton and our film now in their school textbooks, and in 2006, the co-producer of HBO nominated us again for an Emmy, this time in the category of US documentaries. And again we reached the finals.”

The most viewed Slovak film, Juraj Jakubisko’s Bathory, was not eligible for nomination as Slovakia’s Oscar contender, because it was in English, and most of the cast was not Slovak.

Slepé lásky (director Juraj Lehotský pictured abovet) was up for nomination along with Démonov (Demons), Polčas rozpadu (Half Life) and Muzika (Music). Lehotský’s film is a documentary, but that is not a barrier in the foreign language film category. The main criteria are that films be feature-length and that they use mostly Slovak casts.

Having submitted all the necessary documentation and a copy of the film itself, the Slovak Film Academy can only sit back and wait. “There are certainly lobby groups at the Oscars, but you can’t influence the voting from the outside. It’s not as easy to predict as voting at festivals, for example. The Oscars are decided by a large group of academics through several stages of voting,” said Zuzana Mistríková, vice-president of the Academy.

Mistríková said it was far from a foregone conclusion that a Slovak film had the right to compete. “The fact that you are an Academy is not sufficient to allow you to enter a film. You have to get accredited every year. It was not until they accepted our application that they sent us entry forms with clear criteria.”

The US Academy’s criteria ruled out such films as Tajnosti (Secrets), Tobruk, Jahodové víno (Strawberry Wine) and Roming (Roaming), because Slovakia played a minor role in these co-productions. The producer of Bathory, Deana Horváthová-Jakubisková, was not happy with her film’s exclusion, and appealed the decision. “We stopped the voting process and asked Los Angeles if Bathory met the Oscar criteria, but the answer was no, so that was the end of it,” said Mistríková.

Slovaks at the Oscars

Obchod na korze (Downtown Store), director: Ján Kadár and Elmar Klos, won an Oscar in the foreign-language film category in 1966. The prize went to Czechoslovakia, even though Kadár was a Slovak director and the film was in Slovak.

Kolja, director: Jan Svěrák, won an Oscar in the foreign-language film category in 1997. Even though this was a Czech film, the unforgettable character of the young lover was played by Slovak actress Silvia Šuvadová.

Musíme si pomáhať (We Have to Help Other), director: Jan Hřebejk, nominated for an Oscar in the foreign-language film category in 2001. This is a Czech film in which the main characters were played by Slovaks Anna Šišková and Csongor Kassai.

Želary (Soldiers), director: Ondrej Trojan, nominated for an Oscar in the foreign-language film category in 2004. This is a Czech film with Slovak actors (Viera Pavlíková, Juraj Hrčka).
Diablova dielňa (Devil’s Workshop), director: Stefan Ruzowitzky, won an Oscar for foreign-language film in 2008. This Austrian-German film is based on the book by Adolf Burger, who was born in Slovakia.