The new face of activism

They are leading the movement to save Vegetka and Diétka, popular vegetarian restaurants in Bratislava which could be forced to close by the end of the year. The city leases floor space to the restaurants, which are housed in the Motešický Palace on Laurinská Street, but CDC, a real estate developer, owns a majority of the apartments in the building. Hodál and Kadašiová contend, and several media reports have confirmed, that CDC is pressuring all the occupants to move out so it can acquire the entire building from the city and take it upscale. 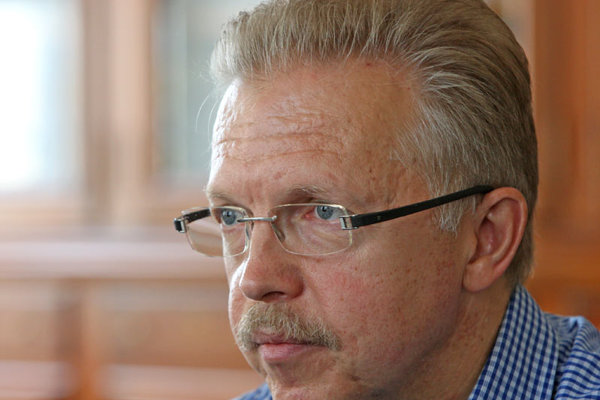 They are leading the movement to save Vegetka and Diétka, popular vegetarian restaurants in Bratislava which could be forced to close by the end of the year. The city leases floor space to the restaurants, which are housed in the Motešický Palace on Laurinská Street, but CDC, a real estate developer, owns a majority of the apartments in the building. Hodál and Kadašiová contend, and several media reports have confirmed, that CDC is pressuring all the occupants to move out so it can acquire the entire building from the city and take it upscale.

Hodál and Kadašiová have taken up the restaurants’ cause. They have spent months organizing a petition, researching the sales history of property, exchanging views with Bratislava Mayor Andrej Ďurkovský (below), and lobbying members of the Old Town Council.

As proud regulars at Vegetka, Hodál and Kadašiová have a personal interest in the restaurant’s fate. But they are equally concerned that failing to rescue it could reinforce the view among the thousands in the community who have made their voices heard that activism isn’t worth the time and energy.

A line that stretches down the street

Vegetka and Diétka, which caters to customers with special dietary needs, have been serving the Old Town since 1947. The restaurants are easy to identify for their eager clientele, who line up on Laurinská Street far in advance of the 11:00 opening time.

“Even people who live outside Bratislava have heard of Vegetka,” Kadašiová told Spex.

The lunch line consists of everyone from bankers to students to prominent artists, who flock to piping hot meals such as spring rolls in spicy sauce and mushroom goulash with sauerkraut and dumplings, always with a side order of salad, and served for around Sk70 (€2.32).

“There’s nothing ideological about the place,” he told Spex. “It just serves healthy food at affordable prices. I’m sure that most of its patrons wouldn’t object to its closing if a similar place existed in the Old Town, but there’s simply no place like it. And if it were to be closed down, the chances of a similar place opening up would be a million to one.”

Hodál said many locals appreciate that Vegetka and Diétka, unlike most of the other restaurants in the Old Town, haven’t changed their image to appeal to tourists.

“It’s set up like the cafeterias during socialism,” he said. “The customers carry trays, the staff jokes with you while they give the food, and everyone shares tables, which means they talk and sometimes become friends.”

The battle over closing the restaurants escalated soon after the media picked up the story of their plight. In May, CDC’s director, Miroslav Svoboda, accused Vegetka of using outdated technology in the kitchen and storing food improperly.

“I wouldn’t eat there because I know the conditions in which they produce the meals and store the ingredients are unhygienic,” he told the Sme daily.

Hodál rejected those charges as part of a “smear campaign.”

“The restaurant has passed all its inspections,” he confirmed.

Hodál added that the restaurants received a clear illustration of the forces working against them when, in July, Vegetka had to close for a week for health inspections due to an “anonymous tip.” The Health Inspectorate quickly ruled that Vegetka was complying with all regulations and allowed it to reopen.

Don’t take away our Vegetka

The legal saga over Vegetka and Diétka began in February, when the city informed Divesta, the company which has been running the restaurants for 17 years, that it would not renew its lease past the end of this year. The letter cited an unspecified breach of the rental agreement as the reason for the decision. When Hodál and Kadašiová inquired further, the city was unable to provide any specific justification.

“Of course, as the owner of the property, the city has the right not to extend the lease,” Hodál and Kadašiová said. “But as elected officials, the city should take the will of the people into consideration, and their will is evident from the line in front of Vegetka and the petition drive.”

So Hodál, Kadašiová and a few other activists joined forces to form the Neberte nám Vegetku (Don’t take away our Vegetka, which is a play on the title of a popular 1980s musical) civic association to oppose the move.

Hodál said their research shows that, in 2004, the city sold permission to build in the Motešický Palace’s attic to a company that, in turn, sold it to CDC, which this January began building 19 luxury apartments there. Not only was the space in a cultural heritage zone, which should have prevented a construction permit from being issued, Hodál said, but the space was sold for Sk490 (€16.27) per square metre, which was a fraction of its market value.

“This is why I find it so absurd when the city complains about not having money,” Hodál said. “Anybody would have bought the space at that price. I would have. Obviously, the deal was not transparent.”

At the end of April, with scrutiny from the media and public growing, CDC and the city changed their stance on why Divesta’s lease hadn’t been extended.

The parties claimed that the Motešický Palace, which is 160 years old, was in such dire condition that each of the tenants had been asked to raise their contributions to the building fund earmarked for renovations, and that Divesta would be unable to make the payments.

Hodál explained that, as majority shareholder in the building, CDC used its voting rights to raise the monthly contribution to the fund from Sk10 (€.33) per square metre to Sk945 (€31.37) per square metre. This resulted in Divesta’s contribution rising to a staggering Sk900,000 (€29,874.53) a month.

Peter Bartek, who owns Divesta, didn’t mince words when confirming to the Sme daily what being forced to pay that much would mean for the future of his company.

“It would mean bankruptcy for Divesta, as for any other entrepreneur,” he said.
Hodál immediately disputed CDC’s argument.

“If this was really about fees for reconstruction,” Hodál said, “why wasn’t that explained in the original letter from the city in February? Why has the city repeatedly changed the reasons for not extending the lease?”

In May, Hodál Kadašiová and other members Neberte nám Vegetku organized a month-long petition drive aimed at putting pressure on Mayor Ďurkovský to extend the lease. In the end, the petition collected more than 5,000 signatures.

Neberte nám Vegetku has tried a number of other activities to keep the situation in the news, including a concert by the band Živé kvety on Laurinská Street, a rally in front of Vegetka and a letter writing campaign targeting the mayor and members of the Old Town Council.

“We created a pro forma protest letter that could be just signed and mailed,” Kadašiová said, “but some people included their personal thoughts and memories about Vegetka.”

At the end of May, Mayor Ďurkovský repeated his stance that the fees for the reconstruction fund are at the heart of the dispute over whether to renew Divesta’s lease.

“If the current tenant paid what’s required into the renovation fund, I wouldn’t have a problem prolonging its lease,” he told the Sme daily.

So Hodál and Kadašiová have continued meeting with Ďurkovský to try to move the case forward. At times, Porubjak has come along.

They have also approached the members of the Old Town Council to discuss passing a non-binding resolution in favor of preserving Vegetka. But a vote held in June failed to pass.
“Many of the members of the Council feel like this matter is not of their concern,” Hodál said, “because the media campaign and public scrutiny have died down in recent weeks. So we have to keep up the pressure.”

Later this month, Hodál and Kadašiová are meeting again with the members of the Old Town Council for a final push on passing a non-binding resolution that could influence the mayor, but for the first time, they admit that defeat is possible.

“The public has a very short memory,” Hodál said. “Within two to three years, they’ll have forgotten all about this.”

He added, “People often say, ‘why should we care?’ They should care because it’s their town, it’s important to them, and they have the power to influence things. But if this case doesn’t work out, it’ll just reinforce the idea that they never should have tried.”

Stefan M. Hogan
Stefan Hogan started writing freelance opera reviews for The Slovak Spectator in 2004. Since then, he has become a staff writer for the Culture Section and a liaison for freelancers, singing alongside Placido Domingo and Luciano Pavarotti. His high school years were spent at the prestigious LaGuardia School for Music and Arts and the Performing Arts in New York City and as an exchange student in Berlin, Germany, where he studied German art songs with a member of the Deutsche Oper.Mr. Hogan began his artistic education as a boy soprano in the Metropolitan Opera Children’s Chorus at the age of 8. Upon receiving his Bachelor of Music degree from SUNY Purchase near New York City in 2002, he moved to Bratislava.
Comments disabled
Send the article by email