THE ANNOUNCEMENT by U.S. President George W. Bush on October 17 that the United States is rescinding the visa requirement for Slovakia and six other countries as of next month was the culmination of years of tough negotiations by a number of people from both countries. Two of those most closely involved were former ambassadors to the United States, Rastislav Káčer (2003-2008), who left his position in Washington this September, and Martin Bútora (1999-2003). 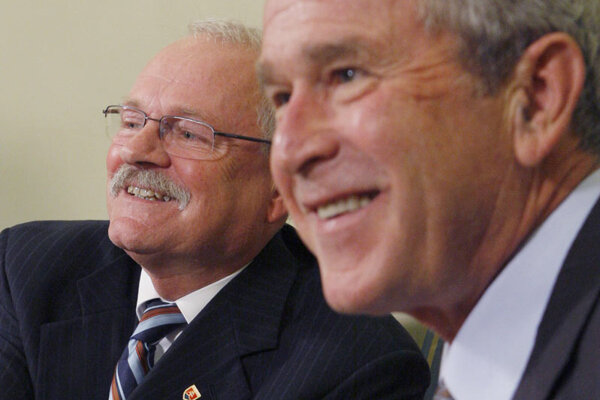 THE ANNOUNCEMENT by U.S. President George W. Bush on October 17 that the United States is rescinding the visa requirement for Slovakia and six other countries as of next month was the culmination of years of tough negotiations by a number of people from both countries. Two of those most closely involved were former ambassadors to the United States, Rastislav Káčer (2003-2008), who left his position in Washington this September, and Martin Bútora (1999-2003).

The Slovak Spectator (TSS): What is your reaction to the U.S.'s decision to lift the visa requirement, most likely on November 17?

Rastislav Káčer (RK): I am happy that Slovakia is now fully recognised as an equal partner and a developed country. Few countries are allowed visa-free travel to the U.S., and Slovakia is now among them. As well as a very important political gesture, it will simplify travel, tourism and business talks. So it has a strong practical meaning for many people. It is interesting for many of those who have relatives in the U.S. Almost two million Americans and Canadians identify as Slovak.

Martin Bútora (MB): My initial response is to say: finally. Several series of diplomats have worked on this for years. Second, I think it is quite symbolic that the official lifting of the visa has been timed for November 17 [the anniversary of the Velvet Revolution]. It is a step towards enabling the public to get to know the U.S. better. We tend to harbour a lot of negative stereotypes about the U.S.. Relations between countries are not just about contact between governments or the military, but about people. Slovaks have very limited contact with the U.S.. While 46 percent of Britons has visited it, only 4 percent of Slovaks have.

TSS: Why did this happen now rather than immediately after Slovakia joined NATO and the European Union?

RK: Slovakia’s entry into the EU and NATO substantially increased our credibility, but there are no reliable deadlines when it comes to lifting a visa. It took some time to convince the U.S. that our country is not an immigration risk, or a source of illegal labour, and that we have had enough experience with immigration that no security risks have infiltrated the system.

MB: Our effort to negotiate an end to the visa requirement was always subject to the context of how the U.S. was coping with the influx of immigrants, including the legal, economic and human aspect of those who already live there illegally. And it was with this in mind that we examined the potential impact that lifting the visa would have in possibly expanding the immigrant community. It is understandable that U.S. resources are limited.

TSS: Do you think Slovakia had to wait until now due to concerns about security?


RK: September 11 made the U.S. much more cautious. Security is first and foremost a feeling. After 9/11, the U.S. wanted to adapt its immigration system to minimise risk. It never considered Slovakia a source of risk, but certain security-related measures became a condition for dropping the visa requirement.

MB: Yes. September 11 became intertwined with immigration, which then led to a discussion on visas. After 9/11 there really was quite a bit of concern about domestic security.

TSS: President Ivan Gašparovič has welcomed the decision to lift visas. But, at the same time, he criticised the EU for not taking a larger role in the negotiations with the U.S. Do you agree? If so, why did this happen?

RK: I don’t feel the need to blame anyone from when I was ambassador. We received a great deal of cooperation from EU Ambassador John Bruton and [Justice, Freedom and Security] Commissioner Franco Frattini. It is true that the burden of the process was on our shoulders, but I am satisfied that we achieved what we wanted without losing anything in the process, also concerning relations within the EU and with the U.S..

MB: We really did not receive a lot of support from the EU. The issue was not treated like a priority. So the countries involved had to negotiate with the Americans themselves. The criteria for rescinding visas were set in a way that seven countries currently meet them. And it is good that they aren’t linked to any kind of special relationship, military or otherwise, but mainly to the exchange of security data.

TSS: Prime Minister Robert Fico has said that the principle of reciprocal relations means this should have happened long ago. Do you agree?

RK: Everyone has their own view of the truth, and everyone is excited about different things. The fact that U.S. citizens haven’t needed a visa for Slovakia gives us no right not to need one for the U.S.. It was our decision to issue a one-sided visa waiver towards the U.S. at the beginning of the 1990s, and it was right. Slovakia and the EU have a one-sided visa towards several countries in the world, even some with whom we share very good relations. So I consider this argument false.

MB: It is easy to say that the visa requirement should have been rescinded a long time ago, but someone had to achieve this. The prime minister’s foreign policy portrays his government as not caring about deepening or developing Slovak-American relations, so it is perhaps from this position that he has chosen to downplay the significance of the decision.

TSS: Do Slovaks abuse their time in the U.S. by illegally staying longer or working?

RK: If so, the number who do this is minimal and, therefore, of negligible importance to the U.S.

MB: I don’t think that we exceed the limits on this. Our people know that staying illegally has risks. But it can’t be prevented because anyone who wanted to do it could have done long ago.

TSS: Can you provide some background information from your mission as ambassador on the effort to negotiate an end to the visa requirement?


RK: Well, that would be a long story, by far exceeding the limits of a short interview.


Today’s situation is the conclusion of an effort over a long period, and everyone who stood on the side of economic, political and social progress in Slovakia should be thanked for it.

While the U.S.’s standing has slipped, it continues to be a crucial player on the global stage.

MB: Hungary, the Czech Republic and Slovakia had just taken up the issue of visas during my tenure.

The informal discussions about the arrangement not feeling natural began and we considered proceeding jointly. It progressed steadily from that point on. Rastislav Káčer deserves a lot of credit for this development.