Slovakia braces for the storm

By late October 2008, the question was no longer if the global crisis which forced financial giants such as 158-year-old investment bank Lehman Brothers, Merrill Lynch, and insurance colossus AIG to their knees would affect Slovakia but how great the impact would be. There were also concerns about which sectors were likely to be hit hardest and what kind of prevention was needed to avoid the worst-case scenarios. 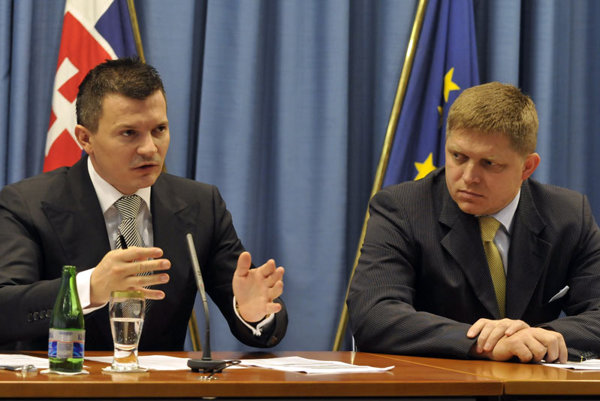 By late October 2008, the question was no longer if the global crisis which forced financial giants such as 158-year-old investment bank Lehman Brothers, Merrill Lynch, and insurance colossus AIG to their knees would affect Slovakia but how great the impact would be. There were also concerns about which sectors were likely to be hit hardest and what kind of prevention was needed to avoid the worst-case scenarios.

From mid-September to early October, Slovak politicians, bankers and analysts gradually abandoned their rosy scenarios predicting that the country would be sheltered by its recent economic growth, cautious banking and sufficient liquidity. Yet the country is headed down a better path than some, market watchers say, hoping that Slovak financial houses will withstand the freeze in liquidity in American and European financial markets, and the economy, a slowdown notwithstanding, will avoid recession.

In response to a decision by European Union finance ministers to raise the minimum level of guaranteed bank deposits to €50,000 across the EU, the Slovak government went one step further, declaring that it would guarantee all deposits in full.

Prime Minister Robert Fico has said on several occasions that Slovak banks are safe, and that the deposits are not under any real threat. According to Finance Ministry State Secretary Peter Kazimír, the move was a demonstration of trust in the Slovak banking system.

“We are actually declaring that we believe in its safety and stability, and can therefore afford to make such a move,” Kazimír said on October 8, as quoted by the SITA news agency.

Slovakia supports the joint measures that eurozone members have taken to calm the financial crisis, Fico said at a special summit in Paris on October 12 and 13.

This was the first time that Slovakia, which will join the eurozone on January 1, 2009, was invited to any of the group’s meetings. The end result was an agreement to provide ailing banks with a lifeline in order to prevent key financial institutions from failing.

Fico said he expects two phases in solving the crisis: preventing the decline of the financial sector and preventing restrictions to economic growth. He has said several times that a “strictly regulated, socially-oriented market economy” is necessary, which, in his opinion, corresponds with his government’s policies.

In mid-September, international insurance colossus AIG, whose Slovak daughter company Amslico AIG Life insures hundreds of thousands of clients, was forced to accept an $85 billion lifeline from the US government to get back on its feet.

Slovakia’s finance minister, the central bank and the insurer assured the public that the turmoil in AIG was unlikely to affect Slovak clients. The problems facing AIG’s mother company should have no direct impact on Amslico, Jana Kováčová, spokeswoman for the National Bank of Slovakia, told The Slovak Spectator.

“The insurer is an independent licensed body which is overseen by the National Bank of Slovakia and as such is obliged to observe all the conditions of responsible business defined by the country’s legislation,” Kováčová said.

Meanwhile, Amslico declared that the crisis will not affect its ability to meet its obligations towards its clients in Slovakia and would not affect its daughter company, AIG Funds Central Europe, or other daughter companies around the world, since their business is independent from the AIG holding company. On October 17, international rating agency Standard & Poor's revised its outlook on Austrian-based Erste Group Bank AG, which is the parent of Slovakia’s Slovenská Sporiteľňa bank, from stable to negative, citing the “impact of increased contagion risk from global macroeconomic pressures building in Central and Eastern Europe and Austria.”

Standard & Poor's also revised the outlook on Raiffeisen Zentralbank Osterreich (RZB) and its subsidiaries, including the Slovak-based Tatra Banka, from stable to negative.

It is noteworthy that S&P has not changed the banks’ high long- and short-term counterparty ratings that assess their ability to meet obligations towards customers.

The central bank has said that the banks operate in Slovakia as independent entities, which keep enough capital and liquidity at their disposal.

Will carmakers be hurt?

Carmakers were among the first to be affected by the global financial crisis. Slovakia, which is home to three major car manufacturing plants, has been watching the automotive sector carefully, since any major blow to these companies could mean serious harm for more than just the regions in which they are based.

The European Automobile Manufacturers Association (ACEA) said that the deepening global slowdown, along with gloomy growth prospects and tumbling consumer confidence, is starting to take a toll on European automakers. According to the ACEA, car sales in Central and Eastern Europe could continue to grow due to a large number of first-time car buyers and higher economic growth. However, these markets will not be immune to the crisis.

Observers say that several export-oriented sectors, including carmaking, will feel the crisis in Slovakia sooner or later.

Though couched in cautious language, PSA Peugeot Citroen, Kia and Volkswagen released statements in mid-October that reported no major problems looming on the horizon and pointing out that some world markets remain encouraging for car sales. In the neighbouring Czech Republic, however, complications have already emerged and some carmakers have announced layoffs.

But car sales have been increasing in Slovakia. This September, 7,098 new passenger cars and small commercial vehicles up to 3.5 tonnes were registered, representing a steep, 23.98 percent year-to-year increase, Mária Nováková of the Automotive Industry Association (ZAP) said in a statement. Since January, 71,643 cars have been registered, up 20.81 percent year-to-year, the ZAP said.

However, carmakers admit that the sector cannot remain immune to the financial turmoil and car producers will have to adjust their programmes to the changing business landscape.

“The automotive market in Europe has been experiencing an actual drop in demand,” Peter Švec, communications director at PSA Peugeot Citroen Slovakia, told The Slovak Spectator. “All the big players in the automotive industry must therefore adjust their production programmes to the emerging situation.”

However, Švec said that the decline is not influencing every market or every product segment in the same way and that the so-called B category, small cars with low CO2 emissions, on which his company’s production centre in Trnava is focused, is less affected.

Dušan Dvořák, spokesman for Kia Motors Slovakia, told The Slovak Spectator on October 16th that the current crisis has not affected production at the company’s Žilina plant.

“Our main product, the Kia cee’d model, falls into the lower middle category, which is the largest segment in Europe,” Dvořák said. “[Our] production plan is prepared on a monthly basis, thus changes might appear in November or December. Plans for next year have not yet been confirmed.”

Local media have already reported changes to shifts at Volkswagen.

According to the Sme daily, most of Volkswagen’s local employees already only work morning shifts, and night shifts have been cancelled. Some employees are being required to take vacations, or are receiving only 75 percent of their normal wages, Sme wrote.

While the company has remained tight-lipped about the current situation, the Aktualne.sk website reported that Volkswagen plans to stop production for several weeks, between December 12 and January 22, 2009, in contrast to original plans for a two-week company holiday over Christmas.

Other industries start to feel the heat

Industry representatives say that the export-oriented sectors of the economy producing consumer goods will also feel the effects of the crisis. However, for some it might open up new challenges and commercial opportunities, business representatives agree.

Martin Čajko of the Slovak Industry Association told The Slovak Spectator that financing, both in the short-term and through investment, is becoming more expensive for firms, which is affecting industry.

More expensive financing is one thing, he said, but when a firm has planned an investment, it is important to know whether those resources may dry up even if it can demonstrate ongoing financial stability.

“Export-oriented sectors of the economy producing consumer-type goods, for example carmakers and electrical goods, are in danger,” Čajko said. “The overall decrease in demand for these goods is leading to a gradual reduction in production. However, I do not see this year that negatively because losses are not very extensive.”

If the current situation continues into next year, there might be a much graver scenario, he added.

The market has also been waiting for the central bank’s word on how it will revise its forecast for economic growth in response to the impact of the crisis, since it is now clear that Slovakia will not be unaffected by a slowdown.

Recent developments have confirmed that the eurozone, which is Slovakia’s major trading partner, is anticipating a considerable slowdown in economic growth, according to Juraj Valachy, an analyst with Tatra Banka. And as it is so strongly intertwined with Slovakia’s economy, Slovakia will not avoid a slowdown, he added.

Silvia Čechovičová, a senior analyst with the ČSOB bank, agreed, suggesting that her bank will revise its original estimate of GDP growth for 2009, which currently stands at 6.5 percent.

“A slowdown in the growth of the eurozone would naturally be reflected in Slovakia’s economy, which is a small, open, export-oriented economy,” Čechovičová said. “We will wait for the GDP numbers for the third quarter of 2008 and will then give a definite form to our estimate. However, it should be readjusted to the range of 5.5 percent to 6 percent.”

The government drafted the state budget based on its existing 6.5 percent GDP growth forecast. The cabinet approved the budget - which assumes revenues of €13.222 billion (Sk398 billion), expenditure of €14.109 billion (Sk425 billion) and a deficit of €886.7 million (Sk26.7 billion) – on October 15. It would leave the general government deficit at 1.7 percent of gross domestic product (GDP).

Fico said on October 17 that the government at that point did not have any reason to change the macroeconomic framework, which is the basis for the budget for next year. However, if necessary, the government would be ready to adopt radical measures, he said.

“Now we will work with the budget in its original form,” Fico said, as quoted by SITA. “But in 2009 we are ready to be completely flexible. If there is really a huge disruption in economic growth and the global financial crisis spreads to Europe, we will adjust the state budget as necessary.”