Mixed messages from the business front

While Slovakia is still prominently marked on the map for investors, the country faces a growing dilemma about how to keep the large investors who have arrived over the past decade while attracting new ones who are thinking about leaving the Western European countries hurt by recent economic developments. Slovakia’s good location, affordable labour and its imminent adoption of the euro are significant strengths in the battle for investment. 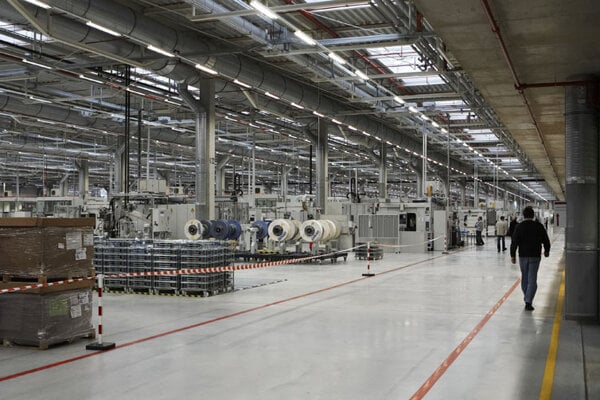 While Slovakia is still prominently marked on the map for investors, the country faces a growing dilemma about how to keep the large investors who have arrived over the past decade while attracting new ones who are thinking about leaving the Western European countries hurt by recent economic developments. Slovakia’s good location, affordable labour and its imminent adoption of the euro are significant strengths in the battle for investment.

However, observers and businesses say that in order to maintain its appeal, the country needs to work harder to bridge the gap between the education sector and business as well as focus on knowledge-based industries, and that the government needs to make a more genuine effort to remove red tape affecting businesses.

The World Bank in early September released its Doing Business 2009 survey, which ranks 181 economies according to the overall ease of doing business. Singapore, New Zealand, the United States, Hong Kong, Denmark and the United Kingdom top the chart.

Slovakia came out in 36th position, ranking highest among the post-communist economies of central Europe ahead of the Czech Republic, Hungary and Poland. Slovakia improved its ranking by one position compared to last year.

The country’s position improved thanks to the establishment of unified contact centres at municipal offices, which have simplified the process of establishing a business by centralising all the required administrative procedures.

However, the period when Slovakia topped the chart of business reformers is over, if not for good at least for the next couple years, market watchers and key business players agree. Opaque economic policies, a heavy administrative burden and deteriorating labour legislation are being highlighted by business as the main hurdles.

Still a country of choice for investors

Slovakia remains the most attractive investment location among Central and Eastern European countries for German investors, a 2008 survey conducted among 95 German investors suggests.

According to a survey prepared by the Slovak-German Chamber of Trade and Commerce, 86 percent of firms would pick Slovakia again as a destination for their investments. Over two thirds of participants in the survey evaluated the current state of the economy positively.

However, the majority of firms do not expect there to be further improvement in conditions, the survey reported.

Slovakia is definitely still a very attractive place for US investors, the executive director of the American Chamber of Commerce in Slovakia, Jake Slegers, told The Slovak Spectator in an earlier interview.

“Slovakia seems to be increasingly appealing to investors in the IT, telecommunications and shared-services sectors,” said Slegers. “Offshoring to Central and Eastern Europe in particular is booming. We have witnessed the gradual transformation of many companies who invested in Slovakia in the past few years, from the transaction centre for Western Europe into a knowledge hub and eventually into corporate/regional headquarters.”

According to Ďurana, the continuing influx of sub-contractors to the automotive industry shows that there is still more room. Also, the growth of investments in the IT sector shows the potential for development in this sector, he added.

However, Stan Jakubek, country managing partner at Ernst & Young, warned that current trends show that there are countries with cheaper labour costs than in Slovakia, e.g. Bulgaria or Romania, and that investors are moving their projects to these countries.

“I believe that Slovakia should focus on knowledge-intensive industries, rather than cheap labour,” Jakubek told The Slovak Spectator. “Investors are calling for high-level infrastructure, innovation in education, the supply chain, technology clustering and research and development support.”

Jakubek is confident that the arrival of the European single currency will help Slovakia to remain attractive for investors.

“The adoption of the euro is expected to provide investors with more confidence in the Slovak economy,” Jakubek told The Slovak Spectator. “They can feel more comfortable about the currency’s stability and enjoy a reduction in transactions costs, mitigation of foreign exchange risk, increased transparency for pricing and easier access to eurozone markets.”

While Ďurana regards the total return on investment as being the main factor influencing investors’ decisions about where to invest, he said that political and legal stability, logistics, and telecommunications infrastructure are also weighed when investment decisions are made.

“The Ernst & Young survey indicated that in selecting investment destinations, political and legal stability weighed most with potential investors (57 percent of respondents), followed by logistics (54 percent) and telecoms infrastructure (51 percent) and then labour costs (47 percent),” Jakubek told The Slovak Spectator.

No longer a top reformer

The Business Alliance of Slovakia (PAS) surveyed 200 businesses in mid-2008 and concluded that the business environment in Slovakia has been declining since the government of Robert Fico took power in 2006. But the government says that it has supported the country’s commercial environment.

The PAS, which represents a range of Slovak businesses, said that of the 30 laws passed by the Fico government which affected the business environment, companies assessed only 13 as having a positive effect. The businesses surveyed were critical, among other things, of what they defined as growing uncertainty among investors in the energy, pension management and health-care sectors.

Tougher labour legislation, an increase in the complexity of tax legislation, labour shortages and unclear business policies also made it on to businesses’ list of complaints.

The surveyed businesses gave the Fico government an “A” only for its steps to sustain macroeconomic stability, for achieving a balanced budget and for the euro changeover.

In response to the PAS survey, Fico’s spokesperson Silvia Glendová said on June 26 that the prime minister was not surprised by the criticism since his government’s priorities are to promote solidarity in society and provide support to socially disadvantaged groups.

Meanwhile, the World Economic Forum in its 2008-2009 Global Competitiveness Report ranked Slovakia 46th among 134 countries. Last year Slovakia occupied 41st place; because one newly-included country entered the ranking ahead of Slovakia, this represents a fall of four places compared to 2007, said the PAS, which is also the Slovak partner of the World Economic Forum.

The report ranked the United States, Switzerland, Denmark, Sweden and Singapore as the most competitive economies surveyed.

The World Economic Forum identified non-wage labour costs, agricultural policy costs, favouritism in decision-making by government officials, wasteful government spending, the burden of government regulation and the efficiency of the legal framework as Slovakia’s main competitive disadvantages, according to the organisation’s official website.

As for Slovakia’s competitive advantages, the World Economic Forum listed the country’s openness to foreign investors and the new technology which they bring, its low barriers to the import and export of goods, flexibility in wage bargaining and a close correlation between salaries and labour productivity, low terrorism-related risks and access to capital, according to an official PAS release.

Which rankings to believe?

PAS does not see any big discrepancy between the findings of the alliance’s business survey, which detected a decline in the business environment and the World Bank’s, which showed Slovakia climbing one rung, suggesting that Slovakia has not made any major progress in removing barriers from the way of business.

“Looking at the business parameters by which the World Bank evaluates and compares economies, one can see that Slovakia has made progress only in the area of establishing companies, thanks to the establishment of unified contact centres,” the executive director of the PAS, Robert Kičina, told The Slovak Spectator.

However, this was the result of an EU directive on services, which means that unified contact centres are being set up in all EU countries.

“The other parameters show only slight improvement or even regression,” Kičina said. “The important thing is that no changes have been made to the most serious barriers to running a business, which are court proceedings, the enforceability of the law and bankruptcy proceedings. Domestic surveys indicate their decline.”

According to Kicina, it also is important to add that annual changes to the methodology of the Doing Business survey make a year-on-year comparison of performance complicated: last year Slovakia slipped one ranking while this year it improved its position by one rank, “which means that we are where we were two years ago and it is really difficult to conclude that the government has improved the business environment in Slovakia,” he added.

As for areas which are calling for reform, Kičina listed legal enforceability and the performance of the courts: most importantly, speeding up decision-making by the courts.
Kičina identified payroll taxes as another problem.

“If the government is socially oriented and not interested in reducing payroll taxes, there is certainly room to make social security more transparent; today it is too complicated on both sides: the income and the expense side,” Kičina said.

According to Kičina, the government should free businesses from the burden of duplicate submission of different data, as well as making it possible for a business to communicate with the state electronically and revising the volume of data that the state requests from businesses. Kičina also named reforms to bankruptcy legislation and public procurement law as being priorities for business.

Kičina also said that government representatives have been contributing to the worsening image of businesses in the eyes of the public, despite the fact that the private sector generates 92 percent of Slovakia’s GDP and employs 72 percent of its labour force.