DONKEYS in the city? That’s right. Thirty donkeys will be at Bratislava’s Hviezdoslavovo Square through November. Not real donkeys, of course, but life-sized photographs by Oliviero Toscani. 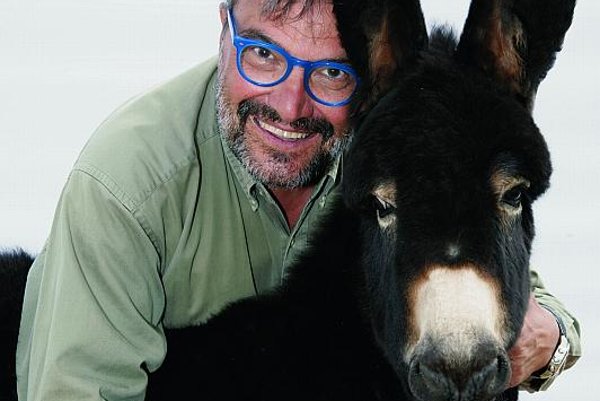 DONKEYS in the city? That’s right. Thirty donkeys will be at Bratislava’s Hviezdoslavovo Square through November. Not real donkeys, of course, but life-sized photographs by Oliviero Toscani.

It is part of a project by the Italian commercial photographer, known for his provocative advertisements in the United Colors of Benetton campaign, that is one of the highlights of the Month of Photography, an annual photo festival in the Slovak capital.

“Oliviero Toscani will arrive in Bratislava in person to open his exhibition on November 8,” Václav Macek, the president of the Month of Photography festival, told The Slovak Spectator. “The next day he will give a one-hour lecture at the University of Performing Arts in Bratislava (VŠMU).”

The festival’s organisers first proposed exhibiting Toscani’s works at the House of Arts, which, along with the Central European House of Photography, is the focal point of the festival.

“But [Toscani] did not want to,” Macek said. “His argument was that he makes advertisements and that he does not want to have it inside, but outside, like billboards.”

My world is advertisement and as such it must be outside, visible and accessible everywhere, Macek recalled Toscani saying.

The project’s official title is Hardware + Software = Burros / Osli / Donkeys. He has already displayed it in France, Spain and Croatia.

“This is exactly what Toscani does very well: take an ordinary motif and put it directly in front of your eyes,” Macek told The Slovak Spectator.

He used the example of Toscani’s recent photograph of an anorexic model to illustrate his point.
“Many photographers have taken pictures of anorexics,” he said, “but when you see it on a large billboard, it really opens your eyes, because it about something that was kept out of the public’s view. And he is a master of this.”

Toscani’s donkey project references a part of life that’s still common in other parts of the world.
“Donkeys are seen in villages and associated with farming,” Macek said. “The exhibition will be about the contrast of 30 donkeys visiting Bratislava, a self-sufficient city.”

A focus on history and countries

The Month of Photography presents exhibitions from Central and Eastern Europe, as well as photography from other, different parts of the world each year. This year, it’s Italy.

“In order to provide a comprehensive picture of Italian photography, we try to select something from its history, to bring a famous personality, to introduce a young photographer and to show the current trends,” Macek told The Slovak Spectator.

Mario Giacomelli is a prominent photographer from the 1950s and 1960s.

Paolo Ventura’s project is entitled Winter Stories. It uses pictures he took in his studio to depict life in a fictional northern Italian town in the late 1950s.

Alfonso Modonesi is bringing A Documentary Report About the Prague of 1968 by an Italian Photographer, which features images he snapped 40 years ago. Modonesi is lending the display to the festival to commemorate the anniversary of the invasion of Czechoslovakia.

It is not the only display marking the anniversary.

Invasion ‘68 is an exhibition by Josef Koudelka.

“This is the best that has been made about the invasion,” Macek said. “Pavol Bielik [who covered the invasion in Bratislava] is excellent, but this is compact and compelling because the situation in Prague was much more dramatic. There was more shooting, more people died there.”

Of the exhibitions featuring Central and Eastern European photography Macek mentioned the display Behind Walls – Eastern Europe before 1989.

“This is a combination of photography and history,” Macek told The Slovak Spectator. “It is a selection of photos from Eastern Europe showing, mostly in documentary photos, how people lived in Poland, Hungary, Romania, Ukraine and Slovakia before the fall of the totalitarian regime. Here the photography is a specific kind of art, which as well as being aesthetic also tells a story about that period of time.”

Koudelka is not the only photographer from the renowned Magnum photo agency whose work will be on display. The Slovak National Gallery will host a retrospective of famous German photographer Thomas Hoepker that includes more than 200 works from 1955–2008.

“Hoepker is the polar opposite of Toscani,” Macek told The Slovak Spectator, “in that he is a classical magazine reporter. For example, he was sent to take pictures of Nikita Kruschev at the UN or Muhammad Ali. So his scope of themes is very extensive and diverse. He has the ability to capture the particularity or paradox of the moment. This makes his images very effective.”

When speaking of Slovak artists whose work will be on display Macek brought up Karol Kállay, who will present Day Full of Wonders. Taken in 1963, it is about the one of the first paediatric heart surgeries in Czechoslovakia. He also mentioned works by Andrej Bán, who recently completed his Kosovo 1999 – 2008 project and published a book, and Miriam Petráňová, who will present a project entitled My Celebrities.

When, where and what?

The festival starts in the Michalský Dvor gallery on October 30. The first exhibition is 3 Roses, 9 Ravens, 12 Months by Dutch photographer Jaap Scheeren. The marathon of openings continues from November 3 to November 9. Most of the displays will run until the end of November.

The accompanying events include a conference, a concert and the sittcomm awards ceremony.

The portfolio review has become an inseparable part of the festival. It allows beginners and professionals the opportunity to show their work to gallery owners, curators, magazine editors and other important personalities in the field of photography.

“This year, there will also be something new,” Macek said. “After a two days of portfolio review, the best portfolios will be presented at a slide show at the Film and Television Faculty, Academy of VŠMU on November 8.”

As in the past, this year’s Month of Photography festival provides a range of exhibitions that present an extensive scope of photography.

“Not missing something important requires at least three days seeing the displays,” Macek wrote in Fotonoviny, a newspaper about photography in Slovakia. “Of course, only if this person does not plan to visit some of our accompanying events in Berlin, Moscow, Vienna, Bielefeld or Budapest.”

What: The 18th Month of Photography
When: November 2008
Where: Museums, galleries and other venues in Bratislava
Admission: Sk300 or €10 (festival pass), Sk20-Sk100 for individual exhibitions
www.sedf.sk.