POLITICAL analysts in Slovakia have welcomed the election of Barack Obama as president of the United States. They expect the domestic political situation in the US to improve during his presidency and international relations to prosper. 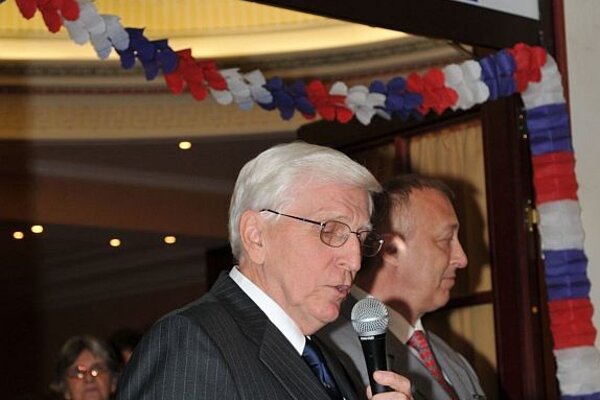 US Ambassador to Slovakia (left) welcomed guests on election night. (Source: Courtesy of the US Emba)
Font size:A-|A+

POLITICAL analysts in Slovakia have welcomed the election of Barack Obama as president of the United States. They expect the domestic political situation in the US to improve during his presidency and international relations to prosper.

Pavol Demeš, former Slovak foreign affairs minister and current head of the German Marshall Fund of the U.S. for Central and Eastern Europe, believes that Obama elicits all that is beautiful about America.

“While watching his [victory] address, the thought that came to my mind was, ‘If America did not exist, we would have to invent it,’” he told The Slovak Spectator.

Martin Bútora, a former Slovak ambassador to the US who is currently the honorary president of the Institute for Public Affairs (IVO) think-tank, told The Slovak Spectator that Obama brings enormous charisma to the White House.

“His victory has renewed what people call ‘the American dream’,” Bútora said. “This means that everyone can be successful if they work hard and try hard.”

Demeš said he noticed that the country was ripe for change during a trip to the US several weeks ago.

“Electing Obama is very good news for the international public as well,” he observed.

Demeš said the intense attention the election attracted from the public and media resulted from an understanding of how many things were hanging in the balance.

“Whether America manages to regain a certain inner balance, will confront domestic political problems, and whether it regains its leading position in the world,” he explained.

Bútora agrees that the US was eager for change. He said the feeling heightened during the current economic crisis, which led to the favourable media reports of Obama’s response.

“It reflected Americans’ general dissatisfaction with the direction their country was heading in,” he said. “And it also reflects hope as for who could solve these problems.”

“His is the story of the kind of politician who is not born every day,” he said. “Obama has the chance to renew the principle of trust in democratic capitalism.”

Ivo Samson from the non-governmental Slovak Foreign Policy Association told The Slovak Spectator that he supported Obama for president, but is now concerned whether he will be able to live up to people’s expectations.

Samson said that, unlike the elections in the US since World War II, this one was not just about the country’s future.

“This was the first election that was also about the past,” he commented.

Samson mentioned that there is still latent tension in the U.S. between blacks and whites. Some black groups have long sought an apology for slavery, he noted, and others have even requested compensation.

“The election of an African-American president will quiet such claims for good,” Samson predicted.
Bútora said the election of a black president may serve as inspiration in Slovakia as well.

“I can imagine that young Roma students or politicians in Slovakia will be inspired by Obama’s story,” Bútora said.

Asked whether Obama’s election could reduce the influence of nationalist politicians in Europe, such as Slovak National Party chairman Ján Slota, Bútora responded: “Anything that reduces Slota’s effect will have to arise from Slovak society itself. It has to find a lot of strength and resistance against nationalism.”

“Obama’s election represents a big promise, in other countries as well, that this issue will be discussed in a different way,” he said.

Both Bútora and Demeš expect relations between the EU and the US to improve and predict that communication will become more systematic and regular.

“This is not only about improving relations between the US and Europe, but about these two partners in step with each other on the issues of security, economy and solving global problems,” Demeš stated.

But Samson noted that the US also has to spend time focusing on a number of domestic issues. Obama seems to be in favour of pulling troops out of Iraq, but this may leave maintaining stability in that region to the EU, Samson warned.

But Bútora rejects that idea, even though Obama has emphasised the needs for Iraqis to take more responsibility for their country's affairs.

“As well as the values argument, Obama uses the economic argument," he said. "The $10 million a week that keeping troops in Iraq costs is ruinous."