The law from a different perspective

A YEAR ago, Sean Deskins was a law student who wanted to gain some international experience, so he decided for Slovakia, pretty much at random. At that time, he didn’t really know what to expect. But today, he feels like a considerable part of his life is here, and knows he’ll never regret his choice. 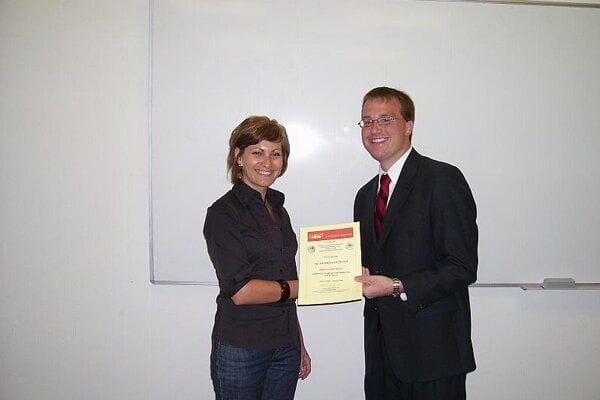 Sean Deskins awarding a certificate to one of his students. (Source: Courtesy of Sean Deskins)
Font size:A-|A+

A YEAR ago, Sean Deskins was a law student who wanted to gain some international experience, so he decided for Slovakia, pretty much at random. At that time, he didn’t really know what to expect. But today, he feels like a considerable part of his life is here, and knows he’ll never regret his choice.

Deskins first experienced Europe during a visit to Trier, Germany in November 2006, where he attended a seminar at the European Academy of Law on the development of labour law in new European Union member states. This would become the focus of his next trip to Europe – an exchange stay in Slovakia.

Deskins didn’t have the time or the resources to study abroad while at college or law school, so he waited until May 2007, after he had graduated from the Louis D. Brandeis School of Law at the University of Louisville, to start applying. He was accepted into the Fulbright Scholar Program, which provided him with the chance to travel abroad as a researcher.

Deskins chose Slovakia, partly because there were no language requirement from the local Fulbright Commission, but also because he could apply his skills and expertise here.

Deskins specialises in labour and employment law. While in law school, he served as a student liaison to the American Bar Association’s Section for Labor and Employment Law.

“I learned that the Slovak National Council [parliament] had made several changes to the Labour Code over the past decade,” he explained. “In particular, it has tried to incorporate European directives into Slovak law.”

He added, “The only way that I would be able to get firsthand information about how the Labour Code affects people’s everyday lives was to come to Slovakia. Also, I was able to meet with a Slovak 'advokat' [barrister] and discuss how the Labour Code actually functions in real-life situations.”
Throughout his life, Deskins has argued on behalf of several issues – from fighting for lower tuition as a member of his university’s Student Government Association to lobbying his state legislature to allow undocumented immigrants to obtain driving licences.

“One of the most rewarding aspect of being a lawyer is the opportunity to serve as an advocate to someone else,” he said.

But his Slovak experience was about more than professional development. He had just a few months to transition from being a student to assuming the role of a teacher, which he admits was a bit intimidating at first.

As a researcher at Comenius University’s Faculty of Law, he was assigned to leading courses for Slovak students about the American legal system.

“My favourite classes were when my students and I compared American law with Slovak law,” Deskins said.

He learned how foreign some concepts from American law seemed, and built on those points to give his students a more thorough view of the American legal system and its practical function.

Deskins commented that the style and format of the discussions was the biggest difference between classes in the U.S. and Slovakia.

“American students are more willing to speak in class and interact with the professor,” he explained. This was a challenge particularly at the beginning of his stay. “Many students would speak to me privately after class, but they were too shy to speak up during it.”

This also extended to everyday life, he said, noting that Slovaks tend to have an inferiority complex about their country.

For example, many people were shocked when he told them that he really liked Slovakia.

And Deskins, who likes Bratislava, was very surprised to learn that people living in the city think that Vienna or Prague is much nicer.

Deskins’ impressions of Slovakia remain positive. He says he found Slovaks to be very warm and hospitable. One of his fondest memories is of experiencing Christmas in Mašková, near Lučenec, where he stayed with a friend’s family.

“I had a great time and I was able to experience a traditional Slovak Christmas, with carp, kapustnica (cabbage soup) and more,” he said excitedly. “I even learned to play Dostihy a stávky [a popular board game] and I’m pretty good at it too.”

Deskins has just returned home. He says he will miss Slovakia and the friends he left here, but his long-term plans are connected with the U.S. Before he came to Slovakia, he passed the Kentucky bar exam and recently became a licenced attorney. He is now planning to clerk for the Chief Judge of the U.S. District Court for the Eastern District of Kentucky.

“After that, I plan on going into private practice,” he said. “I hope to work for a large firm in Kentucky focusing on labour and employment matters and civil litigation.”

However, he would like to learn more Slovak, which he finds a beautiful language. Although he learned some during his stay in Bratislava, he still feels like a beginner.

“My proudest moment involving speaking Slovak occurred in May, when my parents and sister came to visit and I took them to Prague for a few days,” he said.

While on the way back to Bratislava, a Slovak woman sat in their compartment and tried to talk to him.

“We talked for about two hours completely in Slovak,” he exclaimed. “I was very proud of myself.”