A retrospective of history and artistry

BLACK-AND-WHITE photos of a starving Ethiopian boy, US marines, concrete blocks in East Germany, and colourful images of picturesque American landscapes. These are only a few of the images from the exhibition entitled simply Thomas Hoepker, Photos 1955 – 2008. 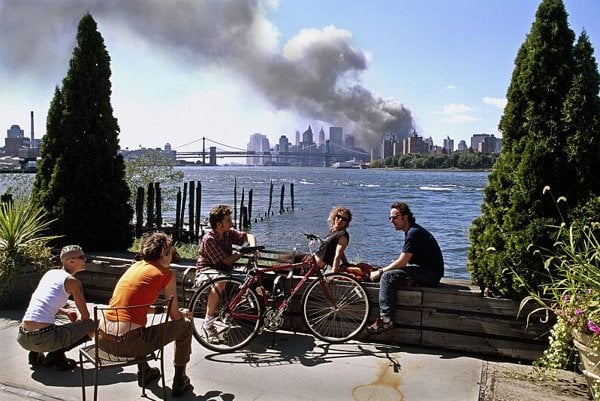 BLACK-AND-WHITE photos of a starving Ethiopian boy, US marines, concrete blocks in East Germany, and colourful images of picturesque American landscapes. These are only a few of the images from the exhibition entitled simply Thomas Hoepker, Photos 1955 – 2008.

This retrospective about the German photographer, who is a key figure from the renowned Magnum Photos agency, is taking place at the Slovak National Gallery during the Month of Photography until November 30.

The display features more than 200 images spanning five decades of Hoepker’s career, which involved receiving an assignment and going there to take pictures.

“I have been a reporter, but I always try to do not only a documentary picture but also a picture that has its own meaning and even composition, so it has a certain, what some people would call, artistic element,” Hoepker said at the opening in Bratislava. “I’m not an artist, I’m a photojournalist, but I’ve gradually found more and more of my images in museums and galleries, so I think that this really is in my pictures.”

Václav Macek, the head of the Month of Photography, pointed to Hoepker’s ability to capture the essence of a moment.

“His picture from September 11, 2001, is an excellent example,” he told The Slovak Spectator. “In the foreground you have a picnic, young people are enjoying the sunny day, and in the background, you see dark smoke billowing from the fallen Twin Towers, where 3,000 people had just died. This contrast is very effective and speaks volumes about that situation. He has this ability and he presents it in many settings.”

In his illustrious career Hoepker worked for magazines such as Kristall and Stern, as well as the Magnum agency. As a photojournalist, he covered a variety of events and topics and visited many countries. This retrospective gave him the chance to reflect on all that.

“If you work, as I did, for 55 years, it’s work, work, work,” he said. “It’s one job after another, one trip or flight after another. And you have a very little time to reflect. You just do your thing, hoping to satisfy your client.”

The preparation for the exhibition forced him to switch gears, sit back and contemplate those 55 years. This process led him to make many discoveries in his archive, including thousands of negatives he did not remember he had.

“Sometimes, I was really surprised, as I did not remember that I did that work,” Hoepker said.
The retrospective is one part of the five-year project by the Central European House of Photography (SEDF) to introduce Slovaks to the main personalities of the Magnum Photos agency.