THE DEVELOPER of a long-heralded luxury housing project in Bratislava has cut the prices of apartments on sale in the complex by 40 percent. The move is not part of a pre-Christmas marketing campaign, but is instead the first visible sign of the impact that the global financial crisis is having on the high-end luxury residential real estate market. 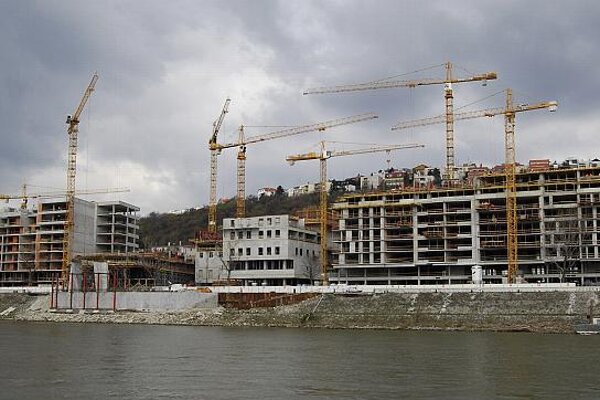 THE DEVELOPER of a long-heralded luxury housing project in Bratislava has cut the prices of apartments on sale in the complex by 40 percent. The move is not part of a pre-Christmas marketing campaign, but is instead the first visible sign of the impact that the global financial crisis is having on the high-end luxury residential real estate market.

Real estate consultants agree that one of the greatest challenges in all segments of the real estate market in the coming years will be the reduced availability of loans because of a more cautious lending approach by banks.

J&T Real Estate, part of the J&T financial group, cut its prices for the first stage of the River Park project, a luxury complex on the Danube embankment below Bratislava Castle, on November 11. The developer made no secret of the reason for its move.

“It turned out that the market is not willing to pay the prices that were defined for these apartments,” he said.

According to Sýkora, the financial crisis is affecting everybody.

“The approach of the banks towards projects has changed,” Sýkora said. “This of course means that the real estate market, and along with it the luxury segment, are quite affected.”

People are now more careful when purchasing and market prices are therefore less stable; under the influence of all these factors, developers of course have problems launching new projects as well additional phases of existing projects, said Sýkora.

J&T Real Estate, however, does not expect a further drop in prices. The present measure applying to River Park, a Sk7-billion project, is for a limited time, Sýkora said, adding that the developer expects the market to recover and prices to gradually return to their original level.

The prices for River Park properties now start at Sk60,000 per square metre, excluding VAT, for a plain apartment (i.e. without any fittings). Of the total of 202 apartments, 140 were made available in the first stage, of which 65 percent have been sold, said J&T.

The developer has been selling the apartments, which range from 73 to 336 square metres in size, including terraces, since summer 2007 for an introductory price of Sk130,000 per square metre.
The gross built area of the project is 150,000 square metres.

Self-assured declarations by J&T’s competitors are not justified, said Sýkora.

“Instead of flexing their muscles, they should take a more realistic view of the market. I expect that they will then have to cut their prices as well,” he added.

However, the developer of another luxury development on the River Danube, Ballymore, will not follow J&T’s example yet.

“Ballymore will not adjust prices for the apartments and penthouses at its Eurovea project yet,” Patricia Hradilová from Ballymore told The Slovak Spectator on November 13. “Nor is it considering such a move in the near future.”

Hradilová also said that the construction of Eurovea is in line with plans and that clients are interested in the apartments there.

As for other developers, Orco Group has offered a 10 percent discount on apartments at Parkville, a complex of 10 villas in Koliba that offers panoramic views of the capital. However, in late October the developer started selling its city-centre apartments at Sk151,000 per square metre, according to the Sme daily. Representatives of Orco said they were confident they would find buyers for the apartments, Sme wrote.

The banks of the Danube have attracted Ballymore and J&T as a good location for their luxury projects.

While peoples’ purchasing power is decisive for the luxury segment, location will always remain one of the most important criteria, say developers.

Bratislava does not offer a huge number of interesting locations, so developers know that high-quality projects set in an interesting position will always attract the interest of the clients, Hradilová from Ballymore told The Slovak Spectator.

However, the developers say that one reason why luxury apartments have not sold out fast lies in the special character of such products.

According to Sýkora, there is a significant difference between luxury apartments and standard apartments not only in the quality of the product and the services, but also in terms of the sales process.

“These apartments are not sold en masse but rather one at a time,” he said.

The purchase decision is made more carefully since the client has to consider such a big investment, Sýkora added.

Hradilová echoed his views. She said clients need a lot of time and sufficient information about the project before they can make their final decision to invest in a luxury apartment.

As for clients, according to Sýkora it is hard to say whether the majority are Slovaks or foreigners, as both groups are represented more or less equally among those who have already purchased an apartment in River Park.

But Hradilová from Ballymore said the future owners of the apartments in Eurovea are mainly Slovaks.