Slovaks could be fined for using poor Slovak

SLOVAKS who make mistakes when using their own language could face financial penalties from next year. The Culture Ministry has proposed an amendment to the existing language law which would impose fines of €100 (Sk3,012.60) to €500 (Sk150,630) for those whose use of the Slovak language does not conform to (as yet unspecified) official guidelines. If approved, the amendment would come into force on July 1, 2009, the SITA newswire reported. 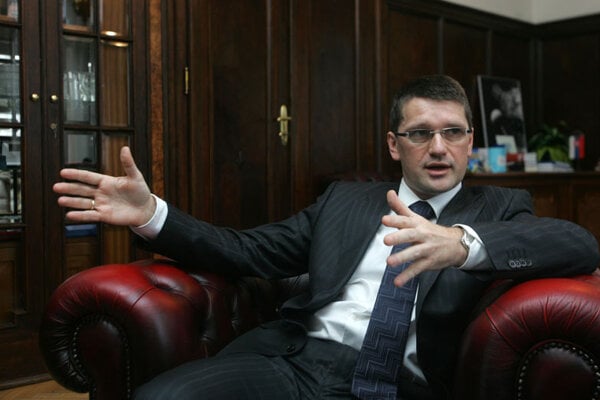 Culture Minister Marek Maďarič described the Slovak language as "perhaps the most precious thing we have as a nation". (Source: Sme-Peter Žákovič)
Font size:A-|A+

SLOVAKS who make mistakes when using their own language could face financial penalties from next year. The Culture Ministry has proposed an amendment to the existing language law which would impose fines of €100 (Sk3,012.60) to €500 (Sk150,630) for those whose use of the Slovak language does not conform to (as yet unspecified) official guidelines. If approved, the amendment would come into force on July 1, 2009, the SITA newswire reported.

The amendment would authorise the Culture Ministry to identify violators, the only exception being those on radio and television broadcasting who would be the responsibility of the Council for Broadcasting and Re-transmission, according to the proposal.

Too many foreign words

The official rationale associated with the amendment, as quoted by SITA, states that the Culture Ministry’s proposal is a response to a “decrease in language culture” which is demonstrated not just by contravention of the rules of correct Slovak but by excessive adoption of foreign words – especially from English and American English – and their use even in circumstances where proper Slovak alternatives exist.

On November 19, Culture Minister Marek Maďarič defended the need for such an amendment when he spoke on public-service broadcaster Slovak Television (STV). “Our Slovak language, which is today the state language, is perhaps the most precious thing we have as a nation”, Maďarič said. “Our predecessors were always aware of this but today some people tend to forget it.”

According to Jozef Bednár, a spokesman for the Culture Ministry, the amendment is a requirement of the present time and situation. The existing language law, the Act on State Language dates back to 1995. It took effect in January 1996.

After twelve years, the need to specify and modernise some of its provisions has become clear, in order to make them comply with accepted and currently effective legal norms, Bednár told The Slovak Spectator. He added that after such a long time the need to take measures in order to secure greater effectiveness of the law has also emerged.

According to the Culture Ministry’s rationale, as quoted by SITA, omitting sanctions from the language bill in 1995 opened the door to an “uncontrollable increase in unlawful acts, demonstrated by increasing instances of the provisions of the Act on State Language being broken”.

The amendment further states that applying the Act on State Language should continue to be within the competence of the Culture Ministry after the amendment.

But Bednár clarified: “The culture ministry will not fine individuals for their use of the state language in their speech.”

However, he did not rule out companies or other legal entities being fined. “The Culture Ministry will take into account language flaws only in grave cases, which have an impact on the wider public,” Bednár added. He gave as examples public signs, signboards, orientation boards, street names, advertising texts and audio-visual works meant for children.

The Party of Hungarian Coalition (SMK), whose main constituency comprises citizens who speak Slovak as a second language, reacted swiftly, describing this bill as "absolutely unacceptable". In a statement signed by SMK spokesperson Eva Dunajská the party called on the ruling coalition not to increase Slovak-Hungarian tensions by unprovoked steps.

The SMK has asked the Culture Ministry to withdraw the bill from inter-departmental discussion. “According to the SMK, the only aim of these proposals can be to dangerously increase the tension between Slovaks and Hungarians,” the statement reads. The SMK rejects such steps, according to the statement, and takes no responsibility for possible conflicts that could stem from the proposed amendment.

Gyula Bárdos, an SMK MP, expressed his doubts to the Pravda daily about the practicality of applying such a law in practice. “Will somebody explain to Mr President that it is not proper to say (colloquial) ‘preci’ instead of ‘predsa’? Or will somebody tell Mr Slota (of the Slovak National Party) that it is not right to say ‘do tankoch’, [i.e. the wrong declination]?” Bárdos asked.

According to SITA, the amendment says, among other things, that written information meant for the public, especially billboards, information boards, the catalogues of galleries, museums and libraries, and the schedules of cinemas, theatres, concerts and other events should be published in the Slovak language. Apart from text in Slovak, they can also contain translations of the text in other languages. The ministry wants, among other things, inscriptions on memorials and memorial plaques be in the state language. If they contain translations into other languages, these can only follow the Slovak version, and the contents must be the same. “Text in other language mustn’t be given with bigger letters than the text in state language,” the proposal further states, according to SITA.

Asked by The Slovak Spectator whether the proposal would lead to the launch of an institute of so-called language inspectors, as the original act from 1995 proposed, Bednár explained that in 1997 and 1998 there were five language counsellors altogether across the regions of the Slovak Republic. The task of these counsellors was, according to Bednár, to inspect the use of the state language in public communications and to perform preventive and education activities. But they were not authorised to issue fines.

“Currently, the Culture Ministry is not considering the renewal of the institute of language counsellors, as practice showed that the public itself reacts very sensitively to poor use of language in public speeches, especially when professional users of words are concerned,” Bednár stressed.

According to him, the wider public have been pointing to potential flaws in the language which they encounter in everyday life. “Incentives arriving at the Culture Ministry are proof that the level of public language performances is under the constant scrutiny of the wider public and that citizens are sufficient inspectors of the right use of the Slovak language in public communication,” Bednár told The Slovak Spectator.

According to him, the ministry has not prepared any language training measures, and neither the current Act on State Language nor its amendment includes any. “It is within the competence of the employer how he arranges such training for his or her employees,” Bednár added.

According to reports, the amendment does not specify who exactly will rule on what constitutes correct use of Slovak.

Researchers at one possible candidate for the role, the Linguistic Institute of Ľudovít Štúr at the Slovak Academy of Sciences, have so far refused to comment to the media – including The Slovak Spectator – since they say they have not received any official notification from the ministry.

The institute said it plans to comment once it has been informed of the proposed changes. The Slovak Spectator understands that its response is likely to be negative.

The Chair of Slovak Language and Literature at the Paedagogical College of Trnava University, René Bílik, told The Slovak Spectator that there was a need to improve the level of Slovak language use, but that a law and fines were unlikely to ensure this would happen.

“Its current revitalisation is paranoid, i.e. based on a suspicion that someone will deform major national values through bad use,” Bílik stressed. He added that respect for values could never be enforced by a fine.

“Respect for language is the respect someone has towards himself or herself and towards others. If the public space is deformed, so communication within it is deformed. However, this cannot be changed with repression!” he exclaimed.

Bílik said that he had not been addressed directly by those proposing the amendment, but had learned about it only when approached for comment by reporters from the Sme daily.

“This is a law that stems from the idea of a national state in which a majority nation dominates culturally and wants – through both legal and repressive measures – to set the limits of the correct use of the language of the majority,” Bílik stressed.

According to Bílik, this evokes the issue of “language control”, “guardians of purity”, and of the use of the language. “Who is the competent person? An official at the ministry? To impose fines on someone for improper use of language is an aggressive approach towards human beings and the language culture.”