THE WINNING ticket from the eight-year dispute between Tipos, Slovakia’s national lottery company, and another lottery company, Športka, is now in the hands of a Czech businessman to whom Slovakia will have to pay almost Sk2 billion. 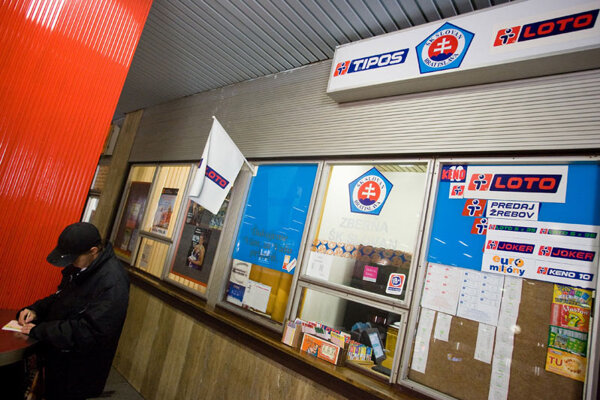 THE WINNING ticket from the eight-year dispute between Tipos, Slovakia’s national lottery company, and another lottery company, Športka, is now in the hands of a Czech businessman to whom Slovakia will have to pay almost Sk2 billion.

Meanwhile, the current and former finance ministers are trading barbs over who is to blame for the dispute’s hefty price tag.

The dispute began in 2000, when Športka, the successor to the federal lottery company, sued Tipos for unauthorised use of its know-how. At that time, it requested Sk310 million in damages. The case worked its way through the courts, with both sides scoring wins, until finally settling at the Supreme Court, which ruled in Športka’s favour this August.

But by that time, the interest on the damages had swelled the amount to Sk2 billion.

In the meantime, Športka had sold the claim on the damages to Lemikon Limited, a company based in Cyprus and owned by Czech businessman Radovan Vítek. The Finance Ministry has said that it is important that Tipos continue to operate because its games contribute significantly to the state budget.

The company transfers around Sk900 million annually to the state budget, said Miroslav Šmál, a spokesman for the Finance Ministry.

“The priority was to maintain the transfers to the state budget at the level they have been so far,” Šmál told The Slovak Spectator.

As for Tipos’ legal bills, Šmál said that the Finance Ministry will provide the company with a loan financed from state assets.

“After a certain amount of time, Tipos will take a standard loan from a commercial bank and begin paying it off,” Šmál said.

According to Šmál, the only reason why this has not already happened is that, due to the global financial crisis, borrowing such a huge amount will take several weeks.

“However, Tipos will take out that loan,” Šmál stated.

The Slovak public only learned about the Supreme Court’s ruling in late November, after Czech website Motejlek.com reported it.

Former Finance Minister Ivan Mikloš called the case a fraud, and laid the blame squarely at the feet of Tipos and the Finance Ministry.

Neither the Finance Ministry nor Tipos used all the legal means at their disposal, Mikloš told The Slovak Spectator.

On November 24, Mikloš requested that the general prosecutor bring criminal charges against Peter Kapusta, the current director of Tipos.

Mikloš also requested that the general prosecutor issue an injunction that would prevent Slovakia from having to pay the Sk2 billion in damages.

“This verdict imposes an unnecessary burden on every taxpayer and citizen of this country,” said Mikloš, adding that he requested the criminal charges as a former finance minister and a citizen.

Finance Minister Ján Počiatek maintains that the settlement was advantageous for both the ministry and Tipos because it left Tipos in a good position and averted further damages.

“Tipos gained the know-how, stopped the interest from accruing at Sk300,000 a day and avoided any protraction of the case,” Počiatek stated at a press conference on November 21.

He added, “So, in the end, we saved Tipos, the millions of people who play the lottery, and we avoided bankruptcy, which would have led to a silent privatisation or the company’s complete dissolution.”

Počiatek fired back at Mikloš, alleging that it was under his leadership at the Finance Ministry that Tipos developed a scheme to found a subsidiary as a way of avoiding the damages.


“In other words, a sheer fraud,” Počiatek said.

The members of the parliamentary Committee for Finances, Budget and Currency were interested to learn about the contract that the ministry and Tipos signed with the Czech businessman.

On November 26, Peter Kažimír, the first secretary of the finance ministry, told the committee that, under the terms of the contract and trade law, both parties would have to give permission for the contract to be published.

Počiatek said that several possibilities arose in the past to solve the dispute under terms more advantageous to the state.

“But nothing was solved, and this is the result,” he said, as quoted by the SITA newswire.

But Mikloš considers the entire lawsuit against Tipos without merit because, he said, Športka never possessed any know-how for operating the games.

“Športka has always been just an intermediary,” Mikloš said.

Mikloš noted that the state could have chosen to buy Športka for a much lower price than the verdict, or could have declared bankruptcy.

The latter option would have been much more beneficial, Mikloš said, because the verdict is many times higher than the value of Tipos’ assets. This would have qualified it for bankruptcy, and Vítek’s company would have collected much less, he said.

“Mr. Mikloš is urging us to commit fraud – not pay our debts, declare bankruptcy, found an alternative company and pretend that the old liabilities do not concern us,” Počiatek told journalists.

Počiatek even suggested that he would file criminal charges against Mikloš, but he had not done so at the time The Slovak Spectator went to print.

Mikloš responded that a person who takes on a liability against a business for a price higher than the value of its assets is risking that the company could declare bankruptcy.

“And if it goes bankrupt, he will not get his money back,” Mikloš told journalists at the press conference on November 21.

However, the ministry maintains that the overall goal was to save Tipos.

“Declaring bankruptcy would have automatically meant that the state budget revenues would have not stayed at the current level, or there would not have been any income at all, and some of the players would have not seen their winnings paid,” Šmál told The Slovak Spectator.

It operates lotteries and betting through a network of 2,075 online trading sites and the internet, according to the SITA newswire.

Dominika Uhríková contributed to this report