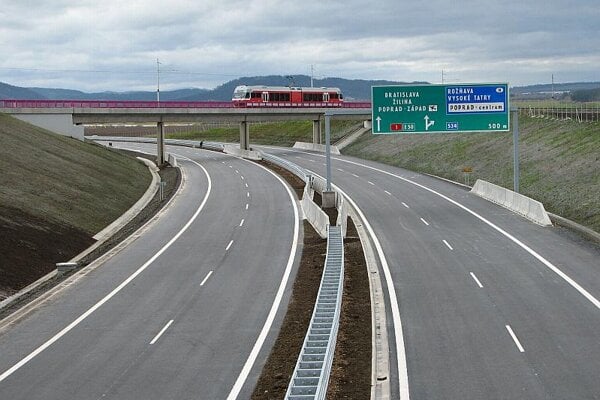 A newly-completed stretch of the D1 highway near Poprad. (Source: SITA)
Font size:A-|A+

The revision switches the deadline for expropriation from before construction begins, where it was under the original act, to by the time final inspection of the construction is under way. The original act had only allowed for this in exceptional cases.

The revision will affect as many as 80,000 landowners, according to media reports.

Transport Minister Ľubomír Vážny argued that, without the revision, the vast amount of highway construction needed around the country would take several years to negotiate before construction could even begin.

It applies to highways built through private-public partnership (PPP) projects and the stretches of land along the planned R2 highway from Trenčín to Košice, via Prievidza, Zvolen and Rožňava; and the Nitra – Topoľčany – Prievidza route.

But lawyers, non-governmental organisations and opposition MPs are passionately opposed to the new Act, which they consider to be unconstitutional.

During the debate in parliament, Christian-Democratic Movement (KDH) chairman Pavol Hrušovský labelled it the “Act on Expropriation”.

“We cannot support an immoral violation of the public’s right to property,” he said.

“Do you really find it acceptable that someone who would like to use their land, and which has been expropriated, would then have to buy a highway stamp to be allowed to drive there?” he stated on November 26.

But the coalition stood firm.

“We cannot block the construction of vital transport infrastructure just because of some irrelevant comments from municipalities,” Vážny said.

He added that the new Act would also prevent any shady land deals that could slow or prevent highway construction by shifting the power for making decisions on land ownership from municipalities to regional construction offices.

Appeals can be lodged with the Construction Ministry, he said.

Vážny commented that he has a mountain of petitions on his desk asking the government to begin constructing highways.

“But then when we start building, I have many petitions from the municipal cadastres telling me not to build them,” Vážny said, according to the SITA newswire. “It can’t go on like this.”
Prime Minister Robert Fico has repeatedly listed highway construction as one of his government’s top priorities.

"In a short time ... such a decision will be made that will ensure that, by the end of the government’s term, the northern highway connection between Bratislava and Košice will be completed, and significant progress will have been made in the south," Fico said on July 4, as quoted by the ČTK newswire.

Those opposed to the revision fought it even in its milder form as part of the original act. This January, opposition MPs submitted a motion against the act to the Constitutional Court.

Milan Ľalík, the Constitutional Court Justice who will consider the motion has not decided the case yet, according to the Sme daily.

"This amount of time is normal in complicated cases," Jozef Skybjak, the Court's spokesperson, told the daily on November 20.

Constitutional lawyer Radoslav Procházka believes all the objections to the original act apply to the revision.

“It is contrary to the Constitution and the Strasbourg Agreement, as it deprives the owners of any sensible or real protection," Procházka told The Slovak Spectator.

Moreover, he added, by passing this new version of the act, parliament weakened its position in the case before the Constitutional Court, as it deprived itself of the defence that expedited expropriation would only be used in cases “where the public interest is strongest."

According to Jozef Vozár, deputy head of the Institute of State and Law at the Slovak Academy of Sciences, the act must be balanced with other measures that will guarantee landownership rights.

“Achieving the construction through means that limit that which lies at the core of ownership rights – as it prevents landowners from defending themselves against expropriation or inequitable compensation for the land – is unacceptable in a lawful state,“ Vozár told The Slovak Spectator.

Like Procházka, he is convinced that both acts contravene the Slovak constitution and the Strasbourg Agreement.

Eva Kováčechová, a lawyer form the Via Iuris civic association, told The Slovak Spectator earlier that she considered the original act a gross violation of ownership rights.

“It actually makes the owners of these plots second-class citizens,” Kováčechová told The Slovak Spectator. “I think this is really unprecedented, a gross violation that is unrivalled in Europe."
There have been cases in the past in which highway construction was slowed by protests involving people with property near the planned roads.

Arguably the best known example of this were the protests in Považská Bystrica, which is still the only town on the route between Bratislava and Žilina without a highway.

According to the SITA newswire, the amendment will show up in the state budget at the beginning of next year through Sk37.54 million (€1.25 million) in increased costs in the construction sector.