“SCIENCE WITHOUT conscience is but the ruin of the soul,” famous French writer François Rabelais said five hundred years ago, and hardly anything seems to have changed since then.This need for awareness is most likely the reason the European Commission organises its annual Science Week, which “shows how science – its impact, uses and applications – is relevant to all Europeans regardless of age, background and education.” 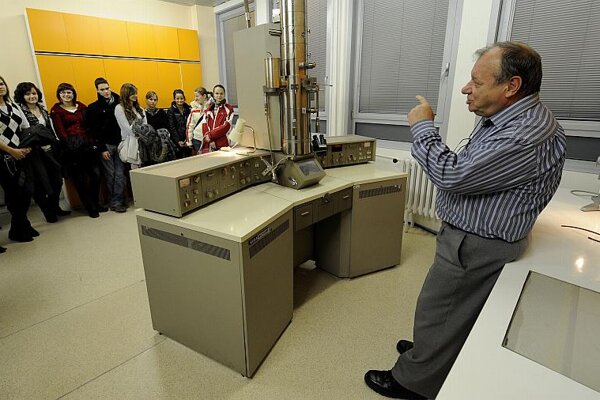 “SCIENCE WITHOUT conscience is but the ruin of the soul,” famous French writer François Rabelais said five hundred years ago, and hardly anything seems to have changed since then.
This need for awareness is most likely the reason the European Commission organises its annual Science Week, which “shows how science – its impact, uses and applications – is relevant to all Europeans regardless of age, background and education.”

As a member of the European Union, Slovakia also takes part in the event, and its popularity has, according to organisers, been on the rise. Its fifth annual exhibition and conference was held from November 24 to 28 and attracted hundreds of people throughout the country.

“We are pleased to see that Science Week has more and more fans, especially among young people,” Ivan Chodák, member of the executive council of the Slovak Academy of Sciences (SAV), told The Slovak Spectator. “This is crucial, as there is nowadays a lack of experts in natural sciences and engineering. If we want this trend to change, we have to motivate gifted students as early as elementary or secondary schools so that they later opt for sciences rather than other subjects.”
As an official partner of Science Week, the SAV offered more than 40 open houses, gave around 70 lectures and prepared several exhibitions.

Experts from the Archaeological Institute in Nitra, for instance, showed visitors how they detect objects below the ground, laboratory bioelectric measurements of different human organs were demonstrated at the Institute of Measurement Science in Bratislava, and the Social Sciences Institute in Košice organised an interactive discussion for teachers on the building of social skills among pupils.

Apart from all these activities, the main focus was on four key events prepared by the Slovak Ministry of Education, the main organiser of the Science Week: a visual arts competition for elementary and secondary schools, a journalistic competition for secondary schools and universities, an international conference and an award ceremony for scientists and researchers.

According to Eva Murínová, chief state counsellor of the National and European Science and Technology Policy Department of the Ministry of Education, it was the conference that was most important from the professional point of view.

“The aim of this year’s symposium, titled ‘Slovakia and the European Research Space’ was to enable EU scientists to exchange their experience in the domain of research and development and discuss the potential obstacles to further progress,” she told The Slovak Spectator, adding that more than 150 Slovak as well as foreign participants had attended the event.

After the conference, the Education Minister Ján Mikolaj presented several scientists and expert teams with various awards. Silvia Pulmannová from the SAV’s Mathematical Institute, for example, became the Science Personality of the Year for her research in quantum mechanics, the Košice ZŤS VVÚ mechanical engineering institute received the Science and Technology Team of the Year award for having contributed to advances at the Large Hadron Collider of the European Organisation for Nuclear Research in Geneva, and Martin Hraško from the Electrotechnical Research Institute in Nová Dubnica was announced the Young Science Personality of the Year for new algorithms in vector control of variable speed drives.

In addition, the Aurel Stodola Awards, granted by power producer Slovenské Elektrárne and named after the famous Slovak engineer and inventor, went to five talented students for their BA, MA and PhD theses on power engineering.

And the Very Low Temperatures Centre of the joint Experimental Physics Institute of the SAV and Pavol Jozef Šafárik University in Košice was presented with an award for having developed unique research methods in the study of cryogenics.

“It is important to stress that science and technology inevitably affect the life of every single citizen, and the development of Slovakia is very much connected with their development,” Mikolaj stated in his speech. “This is why I highly esteem the work of all scientists who try to explain the principles of seemingly inexplicable phenomena with admirable patience, endeavour to improve the quality of our lives, and make distances among us smaller and communication easier.”