JAPANESE culture doesn’t just consist of calligraphy, tea ceremonies and films about heroic Samurai. It also includes animation and comics - known as anime and manga respectively - and computer games. These are already known in Slovakia, partly because of festivals which focus on this part of Japanese culture, for example the Comics Salon and AnimeSHOW. 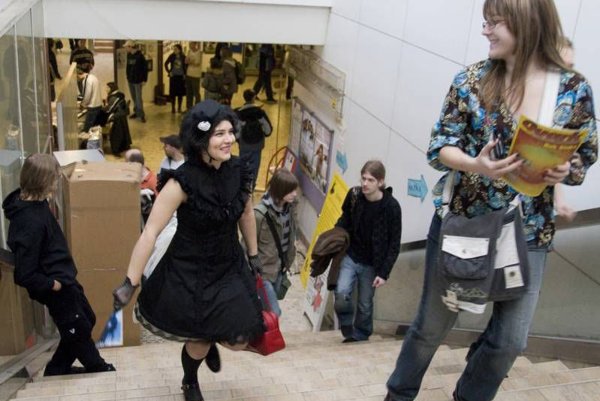 JAPANESE culture doesn’t just consist of calligraphy, tea ceremonies and films about heroic Samurai. It also includes animation and comics - known as anime and manga respectively - and computer games. These are already known in Slovakia, partly because of festivals which focus on this part of Japanese culture, for example the Comics Salon and AnimeSHOW.

AnimeCrew, a non-governmental organisation, organises these festivals in cooperation with the Japanese Embassy in Bratislava and other international festivals with the aim of promoting Japanese culture.

“We focus on three sectors: entertainment, education and support of Slovak creative production,” Róbert Žittňan, the main coordinator of Comics Salon, AnimeSHOW and other festivals told The Slovak Spectator. “First we want to entertain a common audience. Then we endeavour to support Slovak creators: we organise artistic exhibitions and competitions of animated films; and we support Slovak creators who don’t get many other opportunities here in Slovakia. Within the third segment we invite professors and people who are in active contact with Japanese culture to give lectures or workshops, at which people can learn to fold origami, or get information about martial arts. We also hold a literature competition.”

Anime and manga are popular in Slovakia, but Žittňan does not think that that is only because they come from Japan.

“Manga is as interesting for Slovaks as any other comics,” he explained to The Slovak Spectator. “In general, comics are a common part of pop-culture like films, games, and various other forms of entertainment from the West to the East. So it is possible to look on it as something special only because comics weren’t here during the previous communist regime. But young people in particular know and like it in Slovakia.”

Entertainment companies have also uncovered the potential of these media and, after some delay, they have arrived in Slovakia. So it is now possible to watch the Animax and Jetix channels or buy comic magazines here, according to Žittňan.

AnimeCrew has already organised five Comics Salons, which are festivals of Japanese animation and culture and American comics.

The organisers decided to organise AnimeSHOW to focus exclusively on Japanese anime.

“We wanted to give more space to some special categories, for example to hold an animated film competition as well as to deal with some special features regarding creation of animated films because at the Comics Salon there is no space for this,” said Žittňan.

The second AnimeSHOW will take place again at the Kultúrny Dom (House of Culture) in Dúbravka between March 13 and 14. Unlike the first show, the 2009 festival will be a two-day event.

“This time we will have the whole House of Culture and can therefore give more room to lectures, and have a second theatre for film screenings,” Žittňan. “It won’t just be animated films; feature films will also be screened, in cooperation with the Japanese Embassy. It will be two days full of films from Japan, so everybody will be able to find something close to his or her interests in the film part of the festival.”

There will also be lectures about Japanese cuisine including sushi-making, Japanese martial arts and Japanese music.

“So, it won’t just be anime but also traditional Japanese culture,” said Žittňan.

“Andrzej Sapkowski, a Polish fantasy writer, will be the star of the fantasy section,” Žittňan told The Slovak Spectator. “Slovaks and Czechs are hugely interested in fantasy.”


A chance for Slovak manga creators

Manga now receives official support in Japan. In May 2007, Taro Aso, then Japanese foreign affairs minister and now the country’s prime minister, announced the First International Manga Award. The number of entries has more than doubled in the second competition, attracting 368 creators from 46 countries.

The third competition was recently announced, with a January 2009 deadline for submitting manga artwork, Zuzana Želinská from the Japanese Embassy in Bratislava told The Slovak Spectator.

The embassy encourages Slovaks to apply either via the embassy or by sending their work directly to the organisers in Tokyo.

The competition is exclusively for authors outside Japan. The creator of the best work will receive a golden award, with three others getting silver. All four winners will be invited to Japan for around 10 days for the award ceremony.

More of Japan in Slovakia

Apart from helping to organise anime, manga and similar festivals, the Japanese Embassy and the Japanese Foundation have also helped bring to Slovakia Makoto Inoue, a renowned Japanese mime artist. In July he performed a show full of colour and elegant movements telling the story of Nue, a legendary creature from Japanese folklore.

The whole of February was dedicated to Japanese culture in Košice, during which anyone interested in Japan could attend lectures about Japanese martial arts, bonsai trees, calligraphy as well as Japanese tea ceremonies.