A mixture of chance, good luck and intuition

THE AUPARK Shopping Centre in Bratislava now seems almost quiet after swarming with actors, journalists and cinema fans during the 10th Bratislava International Film Festival from November 28 to December 5. 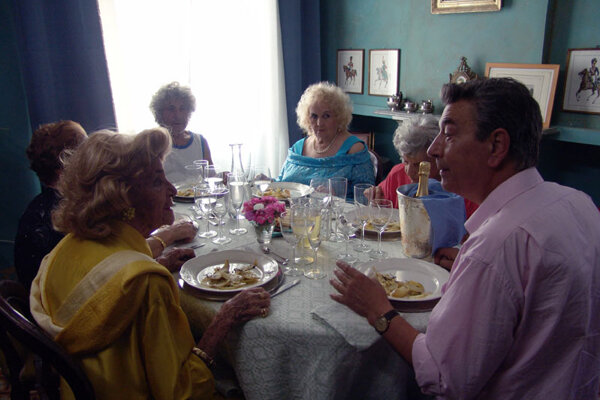 THE AUPARK Shopping Centre in Bratislava now seems almost quiet after swarming with actors, journalists and cinema fans during the 10th Bratislava International Film Festival from November 28 to December 5.

More than 23,000 viewers attended the 206 movies screened in nine sections. So no wonder vypredané (sold out) became the most frequent (and most dreaded) word heard at the festival. Moreover, this was the first year that the festival opened in two other Slovak cities, Košice and Banská Bystrica.

The most prestigious category – the International Competition of First and Second Films – featured 14 films. In the end, Pranzo di ferragosto (Mid-August Lunch), a debut by 59-year-old Gianni Di Gregorio, a noted Italian scriptwriter, walked away with the Grand Prix for Best Film.

This year, the public concurred with the experts, and awarded Mid-August Lunch the Translata People’s Choice Prize for Best Film. But Amat Escalante won the Best Director Award for Los Bastardos (The Bastards); Nada Abou Farhat received Best Actress for her performance in Under the Bombs; and Zsolt Anger received the Best Actor Award for his leading role in A nyomozó (The Investigator).

The festival gave out its own annual prize, the IFF Bratislava Award for Artistic Excellence, to Hungarian director István Szabó, whose Mefisto won an Oscar in 1982. He accepted the award personally on November 29.

“Booking a prominent guest for the festival is usually extremely difficult,” Peter Nágel, the IFF Bratislava’s programme director, told The Slovak Spectator. “It is always a mixture of chance, good luck and intuition. István Szabó is among the most important directors in the world; he has earned a number of prestigious awards from various festivals and his movies are always masterpieces, whether it be a national film or a challenging co-production project at the Hollywood level. Such stars do not come to Slovakia every day.”

But a film festival’s success does not depend solely on the number of celebrities who attend, Nágel said. In his view, many other important characteristics can lend uniqueness to an event.

“Many different people come to a film festival – journalists, film professionals or ordinary spectators – and every one of them has different expectations,” he observed. “To make the right ‘concoction’ including a good programme, attractive selection, and mainly a congenial atmosphere is a chemistry that all festival organisers undoubtedly wish to learn.”

Vladimír Krajniak, the festival’s executive director, said that the IFF Bratislava looked to strike the right balance between original and traditional.

“From as early as January, our team started preparing for this year’s festival by travelling around Europe and drawing inspiration from such renowned festivals as those in Budapest, Venice, Karlovy Vary, Berlin and Cannes,” he told The Slovak Spectator. “But we also tried to remain original in at least some respects. This concerned, for example, the International Competition, which is meant only for directors’ first or second movies.”

“Always holding the festival in the first week of December enables us to review the year in film and discern the most important trends and developments on the international filmmaking scene,” he remarked.

As this was the festival’s 10th anniversary, its organisers decided to shake things up by hiring some new faces. Several months ago, Mária Reháková was appointed as the festival’s new president. It was her idea to open the festival in Košice and Banská Bystrica.
“Every event of this kind looks better when it has a president, and this applies doubly in Mrs Reháková’s case,” he said, smiling.

Krajniak believes that the new decade will be even more favourable to the IFF Bratislava.

“This ‘child’ of ours needs a lot of attention, and I shudder to think what it will be like when it reaches puberty,” he joked. “But seriously, organising a festival is definitely not a rose garden. Every year we start from zero, and financing such a large event is getting more difficult. Hopefully, the next anniversary will be without these problems.”