Treasured painting by Tintoretto goes on display in Bratislava

THE BRATISLAVA City Gallery unveiled on December 3 one of the best known paintings by Tintoretto, who’s often called the last great painter of the Renaissance. 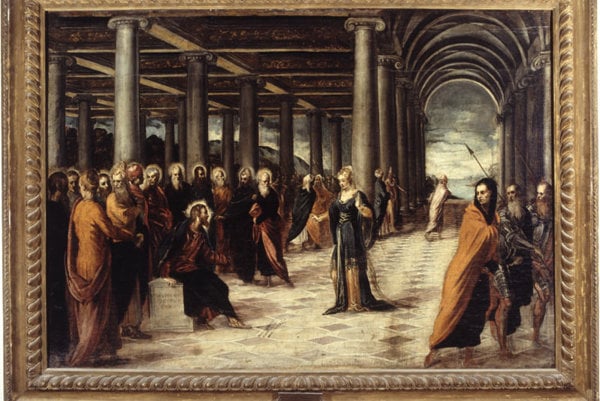 THE BRATISLAVA City Gallery unveiled on December 3 one of the best known paintings by Tintoretto, who’s often called the last great painter of the Renaissance.

The painting, Christ and the Woman Taken in Adultery (1546-1548), is being kept under tight security and climate-controlled conditions at the Mirbach Palace, where it will be on display until January 10.

The gallery borrowed the 460-year-old painting, valued at €3 million, from the Galleria Nazionale d’Arte Antica di Palazzo Barberini in Rome.

“It depicts a scene from the Gospel of John, in which the Pharisees sought to discredit Christ,” Angela Negro, the Galleria’s curator, said at the introduction. “They brought an adulteress to him and asked how she should be punished. He responded with the famous sentence: ‘He that is without sin among you, let him cast the first stone at her.’ The painting depicts the moment when the Pharisees are leaving.”

Tintoretto created four paintings of the scene because Venice was very progressive during his lifetime, so this painting was a kind of a liberal exclamation mark, Negro said.

“When considering which work to show in Slovakia, we decided to pick a piece by an Italian master connected with Central Europe,” Negro told The Slovak Spectator. “It seemed suitable to select a representative of the Venetian School, since Venice was part of Austro-Hungary.”

Tintoretto, whose original name was Jacopo Robusti (1518-1594), was overshadowed by his contemporaries from the Venetian School, such as Veronese or Titian, Negro said.

“He is still underrated here, which we believe is unjust,” Negro said. She called him a genius and an excellent craftsman whose works possess a number of characteristic features. “Tintoretto’s paintings had a special composition that he presented almost like a director,” Negro said, emphasising his use of perspective and light – chiaroscuro (clair obscure) – which would form the basis of baroque style.

Due to the concerns about security and climate, only five people can be in the room with the painting at the same time.

It is the first time in history that it is being exhibited outside Italy.

The Bratislava Gallery borrowed the painting under the Energy for Culture project sponsored by power producer Slovenské Elektrárne, which covered the cost of transporting and exhibiting it.