THOUSANDS of rabbits, hens, pigeons, but also other kinds of domestic and exotic animals were on show at the beginning of December at a national breeders’ exhibition in Nitra. 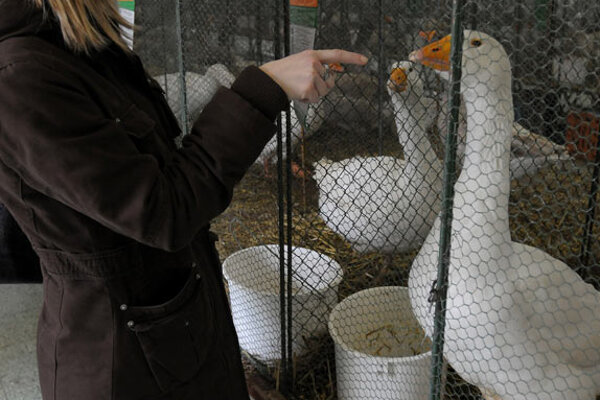 Geese, hens and other birds were on display in Nitra. (Source: SITA)
Font size:A-|A+

THOUSANDS of rabbits, hens, pigeons, but also other kinds of domestic and exotic animals were on show at the beginning of December at a national breeders’ exhibition in Nitra.


The number of people who go in for this hobby has apparently not decreased, the ČTK newswire reported.

In part this is because many breeders raise their animals for food, ČTK was told by Štefan Michalík, the secretary of the exhibition of the Slovak Breeders' Association (SZCH).

“In shops, various things are sold,” Michalík said, “but people who breed animals at home at least know what they are eating.”

Roman Obložinský of the SZCH, who was helping to organise the exhibition for the sixth consecutive year, estimated that the number of exhibitors has increased.

“There are always some new breeders,” he told ČTK. Some breeds of fowl are not even known by normal visitors, according to him. “We have here, for example, Polish green-legged domestic fowl… and a number of Araucanas have been reared which lay eggs with less cholesterol,” Obložinský added.

In spite of the fact that cockfighting is not permitted in Slovakia, a growing number of fighting breeds of poultry are being seen.

Apart from them, tens of thousands of households keep poultry and other animals for their own needs.