EXPENSIVE cars, yachts, planes and motorbikes, a luxury villa on the Mediterranean. Ján Slota, chairman of the ruling coalition Slovak National Party (SNS) lives like a rich man, and has done for years. 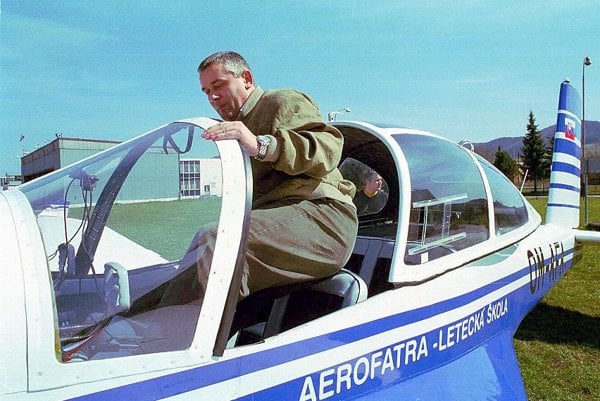 EXPENSIVE cars, yachts, planes and motorbikes, a luxury villa on the Mediterranean. Ján Slota, chairman of the ruling coalition Slovak National Party (SNS) lives like a rich man, and has done for years.

And yet Slota officially earns only slightly more than the average middle-class Slovak – about Sk14.5 million since 1990, or around €30,000 a year at the current exchange rate. So how does he pay for his opulent lifestyle?

Until recently, all of his luxury goods were registered in the names of his friends and acquaintances or of their firms. For years, the financial police conducted no investigations of Slota’s wealth, because on paper it was all kosher.

In 2008, however, Slota admitted to owning a number of possessions worth millions of crowns, raising new questions about the gulf between his legal income and his property. Because if it is true that Slota finances his lifestyle exclusively from the money he earns as a public official, he would likely have starved to death long ago.

According to data obtained under the Freedom of Access to Information Law, between 1990 and August 2008 Slota earned about Sk13.4 million as a member of the national parliament and of the Žilina regional parliament, and as mayor of the town of Žilina. According to Žilina city officials, he earned a further Sk300,000 from his tenure on the supervisory boards of companies owned by the city. From 1992 to 1995 Slota was also chairman of the supervisory board at Prvá Komunálna Banka (today Dexia banka), where he earned about Sk700,000.

In his assets declaration for the last year, Slota claimed to own a three-bedroom flat, a car and a motorbike. The flat in question is in Nová Lesná in the High Tatras mountains, and was bought in 2004. At that time, similar flats in that area were selling for around Sk3 million. The car, meanwhile, is a Bentley Continental, which retails for about Sk6 million, even though Slota claims to have bought it for Sk2.6 million. His Honda Chopper bike cost him another Sk1 million, for a total of Sk6.6 million in assets in 2007.

According to the Plus 7 Dní weekly, however, Slota bought a DA 42 Twin Star airplane this year, claiming that although such models normally cost Sk10 million, his friend George Trabelssie sold it to him for Sk1 million. The SNS chairman also owns a Sealine SC 39 yacht, whose market value is at least Sk8 million. Slota has refused to say who he bought it from or for how much. But if he paid fair value his assets, at Sk15.6 million, would exceed his total declared income.

Even if Slota again secured the yacht for far less than its market value – for Sk1 million, say – he would still have a problem explaining what he had lived on during the 19 years he has been in politics. Even if he had only paid Sk8.6 million for his assets, that would only leave about Sk6 million from which to pay taxes and feed, clothe and entertain himself and his family.

This financial breakdown also leaves unexplained how Slota pays for fuel, insurance and maintenance on his car, yacht, plane, bike and flat, not to mention the upkeep of the Mediterranean villa where he often holidays.

The Generali Slovensko insurance company, for example, said that insurance on his Bentley would run at Sk360,000, while it would charge Sk170,000 a year to insure the yacht.

Not to mention the cost of flying lessons, flight hours and maintenance on the DA 42 Twin Star. Or the maintenance on his Nová Lesná flat, which runs at Sk60,000 a year.

Slota actually lives in a flat in Žilina, which is located in a building owned by the Slovben firm, where Slota’s stepdaughter, Alena Porubcová, is the managing director, and Slota’s friend Georges Gansé from Benin is the formal owner. Slota claims to pay only Sk4,500 a month in rent for the flat, although the market value is Sk20,000 a month. Slovben, which also formerly owned Slota’s plane, did not answer questions as to why it was renting the property to the SNS boss so cheaply.

Whenever he is in Bratislava, on the other hand, Slota stays at a luxury flat near the Polus shopping centre. The flat is also owned by Slovben, and would rent for around Sk300,000 at normal market rates. Slovben did not answer a question as to how much Slota pays in rent.

Slota often relaxes at a villa in Croatia on the island of Rab. The property is owned by Gansé, and is worth an estimated Sk20 million. Slota refuses to say how much he rents it for, but similar properties rent for at least Sk30,000 a week.

Slota clearly has a weakness for luxury cars, the sort which would normally cost at least Sk100,000 a month to lease – but not one of which is in his name. He is currently using a Lexus LS 600h L, a Porsche Cayenne and an Audi cabriolet. The first vehicle is owned by the Lure Group, which is in turn owned by a man Slota nominated to the supervisory board of the SEPS state energy distributor, Ľubomír Řehák. “Sorry, but I’m not going to discuss this with you,” Řehák said when asked how much he charges Slota for the use of the Lexus.

The Porsche, meanwhile, is registered to a 28-year-old baker from the village of Lietavská Lúčka, Martin Hodas. As for the Audi, which he uses while on holiday in Croatia, Slota refused to say who he rents it from and for how much.

The SNS chairman sent the following response to our questions, via SNS spokeswoman Jana Benková: “This is disinformation, and you are just making guesses that have no relevant grounds. If you disinform the public in any way, our legal representatives will be asked to handle the matter.”
Prime Minister Robert Fico said that if any questions remain about the income or assets of MPs, journalists should turn to the parliamentary conflict of interest committee, or to the tax and legal authorities.

“Robert Fico does not want to be an investigator of specific cases. He will continue to do everything in his power to ensure that we have a functional and effective Law on the Origin of Assets,” said the PM’s spokeswoman, Silvia Glendová.