Divers fish out 400kg of litter 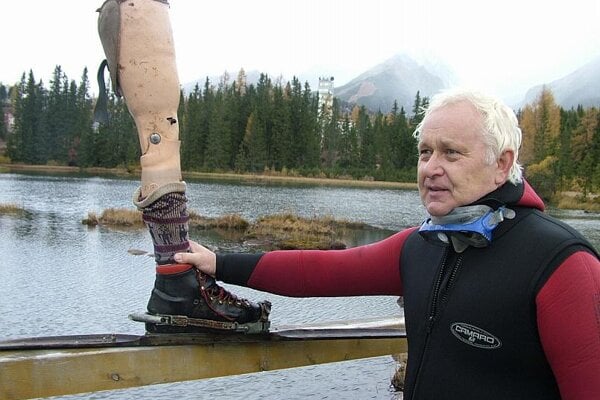 This artificial limb, complete with ski boot, was planted in the lake as a joke. (Source: ČTK)
Font size:A-|A+

Braving both the cold mountain air and a water temperature of about eight degrees Celsius, the divers scoured Popradské Pleso, Štrbské, Nové Štrbské and Velické Pleso lakes and emerged with 399 kilograms of litter, Pavol Kráľ, one of the organisers, told the ČTK newswire.

“Mountain lakes are most polluted after the winter season, when they are frozen and tourists leave trash on the ice,” Kráľ said.

In 15 years of the so-called Operation Clean Waters, divers have removed 3.5 tonnes of litter from the lakes.

“I am about to take my first high-mountain dive ever, and it is in the Tatras, so I am very happy,” Miroslav Pešina, from Prague, told ČTK. Pešina said he has gone on dives in the Mediterranean and Red Seas, and could not resist trying it in the Tatras.

The power-saw blade was found in Štrbské Pleso. It was transported to the shore with the help of a flotation device.

The restaurant utensils – 25 kilograms of them – were found in Popradské Pleso. They were returned to a nearby mountain cottage where Kráľ believes tourists came from and threw them into the lake.
Velické Pleso was hiding 243 kilograms of bricks and concrete that was left there following the completion of the Sliezsky Dom hotel, the SITA newswire wrote.

Štrbské Pleso required the most divers. It is the second biggest lake in the High Tatras, with a depth of 26 metres, ČTK wrote.

In the morning, diving instructor Peter Ferdinand fished an artificial limb with a ski boot attached to it out of Nové Štrbské Pleso.

“I dive in the Tatras every year, but I have never found an item this bizarre,” Ferdinand told journalists.

He later revealed that the limb was a joke he had prepared for everyone’s entertainment.

The divers stated that moving in the cold water can be unpleasant, which is why they can only stay in there for 39 minutes at a time.

At that point, their rubber suits start to lose effect. The water in the lakes is quite clear, allowing them to see several metres in front while swimming, but their equipment, including two oxygen tanks, weighs about 50 kilograms, which limits their movement.