Štefánik back in Bratislava 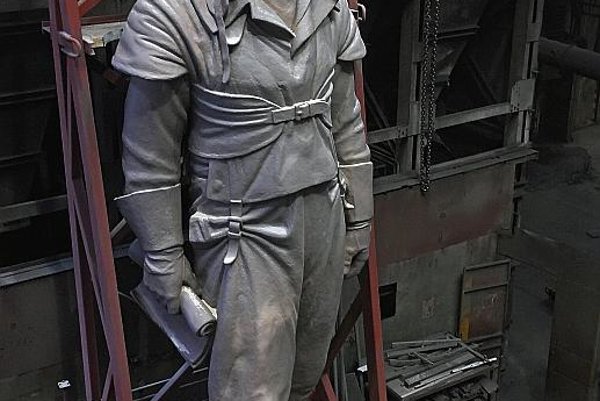 The sculpture is a copy of an original from 1938 by Bohumil Kafka, which used to look out over the Danube from Ľudovít Štúr Square in Bratislava. It depicts Štefánik in his pilot's uniform, and was made according to a model that was 75 cm high.

The idea to make the sculpture came from the Milan Rastislav Štefánik Association.

It will now go into a warehouse, as it is only part of a larger work that has yet to be completed. The larger work consists of Štefánik standing below a 27-metre-high pylon, which will be topped with the lion statue currently in front of the Slovak National Museum. The lion symbolises Czechoslovakia, to the establishment of which Štefánik contributed significantly.

The complete work should be unveiled on May 4, 2009, the 90th anniversary of Štefánik's tragic death, in front of the new Slovak National Theatre on the Danube embankment. The cost of the whole monument is estimated at Sk30 million (€3.126 million), with the Štefánik sculpture accounting for Sk8 million (€127 thousand) of it.

According to Ján Fusko, the president of the Milan Rastislav Štefánik Foundation, the Štefánik sculpture is the largest of its kind in Central Europe.

The foundry first cast 26 pieces of the sculpture, which were then welded into one. Six workers, led by Ján Janda, worked on it for an entire year.

Janda, who also extended the original model of the Kafka sculpture, has been working in the foundry for more than 30 years.

“I'm glad that I have lived to see this,” Janda told the daily. “This was a prestigious commission.”
The most difficult part of the process was assembling the sculpture from its 26 pieces. The workers had to weld it from the outside as well as the inside. The workers went into the sculpture via the head, which in the end was capped with a helmet. The legs were reinforced in order to withstand wind speeds of up to 180 kilometres per hour.

As to where the Štefánik sculpture will be located, there are two proposals. It could be in front of the SND, where its cornerstone has been for four years, or it may go in front of the Interior Ministry, where a pedestrian zone of the new Eurovea development will be.

The Milan Rastislav Štefánik Association is lobbying for the original place with the cornerstone.
“He deserves to go there,” association president Ján Tatara said.

Štefánik was an astronomer, politician and diplomat well known for his work in astrophysics and solar physics. He played a great role after World War I in creating the first independent Czechoslovak state and was named its War Minister. A French citizen from 1912-1918, he also served with distinction as a general in the French Army.

Štefánik was returning to the new Czechoslovak Republic from Italy in 1919 when his plane crashed shortly before landing in Bratislava.