When a hobby is also a job

THE DAJAMA publishing house has been publishing books promoting Slovakia, its natural and historical heritage and guidebooks for 12 years. It is successful, despite being comparatively small, because of its reputation for accuracy and first-hand information. 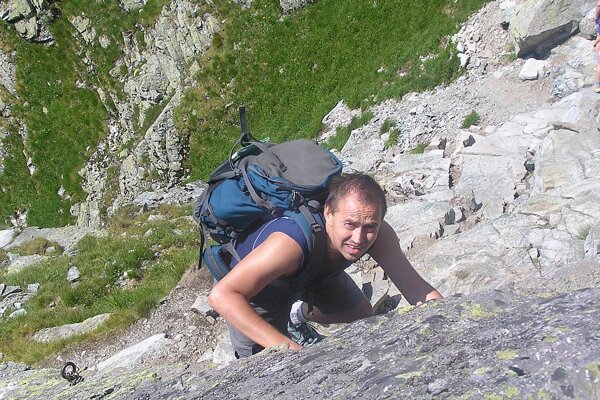 THE DAJAMA publishing house has been publishing books promoting Slovakia, its natural and historical heritage and guidebooks for 12 years. It is successful, despite being comparatively small, because of its reputation for accuracy and first-hand information.

The Slovak Spectator spoke with Daniel Kollár, its co-founder and director.

The Slovak Spectator (TSS): When did the idea come to you to set up a publishing house? How did you get it started?
Daniel Kollár (DK): I am a geographer by profession. About 14 years ago, my colleagues and I at the Institute of Geography of the Slovak Academy of Sciences organised a tour for Austrian colleagues to Sandberg and then, via a natural reserve, to Devín Castle. That gave me the idea to write a book that would cover both border regions. Up to 1989, borders were barriers. I wanted to write a book that would portray them as something that connects people. Since I had some experience with writing, I decided to set up a publishing house with two colleagues, Jana Ovečková and Mária Ovečková. This provided me with the name of the publishing house: Da for Daniel, Ja for Jana and Ma for Mária, Dajama. Our first book was Slovensko-Rakúske Pomoravie (The Slovak-Austrian Moravaland), also published in German, in 1996.

TSS: Were you sure you wanted to start your own publishing house?
DK: Definitely. Jana and Mária left after the first book was published, but it determined Dajama’s direction. From the very beginning I focused exclusively on Slovakia and promoting the different aspects of its towns and regions, such as their nature, history and culture. The idea was to publish books written exclusively for Dajama in various languages.

The first book also provided the concept of our first series: Regions without Frontiers. In the 1990s this was a completely new topic. We followed that with The Slovak-Austrian-Hungarian Danubeland and The Slovak-Polish Tatras.

TSS: How did you finance these activities?
DK: At the beginning we paid from our own pockets. But the book sold out within a year, which provided money to release the next book. And so the business began to slowly pick up. I asked another colleague, Peter Augustíni, to become my partner. From one to two books published per year, we have grown to publishing 25-30. We have not taken out any loans. We finance our publishing exclusively from money earned from previous books. We follow a Slovak proverb: Cover yourself only with a blanket you can afford.

TSS: What followed Regions without Frontiers?
DK: Visiting Slovakia, which contained guidebooks with information about the history and nature of certain regions - Orava, Liptov, Turiec - the Tatras and some towns: Bratislava, Nitra and Trenčín. Each was published in various languages. We also include legends and myths to make them more interesting and enjoyable.

This series is very close to that which is probably closest to my heart - Knapsacked Travel in Slovakia. Dajama spent five years writing 17 books that covered virtually all the important mountain ranges in Slovakia. Each of the books contains about 40 trails. I can verify that we went along all the paths described and that all the information is based on our personal experiences and observations. As I like hiking, in this assignment, my hobby really became my job.

TSS: What are Dajama’s biggest milestones?
DK: Certainly the year 2003 and beginning of 2004, when we started to publish Krásy Slovenska (Beauties of Slovakia), a bi-monthly for the Club of Slovak Tourists.

This magazine has the longest continuous publishing history in Slovakia. It was excellent reading for me since my childhood. During communism it was perhaps the only pure reading, because it was always focused on protecting nature and cultural heritage. So many dissidents who later became known by writing for Bratislava Nahlas (a publication with a critical view on environmental issues) published in it.

Moreover, I had dreamed to run a magazine under Dajama’s umbrella.

We didn’t know what publishing a magazine would involve and how difficult it would be, and it has been rewarding us in non-material ways. My annual meetings with magazine readers charge me with energy for the whole year. We always select a different mountain to climb. This year, it was Volovec, near Rožňava. Even though there was dense fog and rain, 1,200 people attended.

TSS: But you have continued publishing books …
DK: Yes. National Geographic serves as a model. Its magazine created a brand. It also publishes books, whose covers are clearly identifiable with the National Geographic label. Our idea was that people should start identifying Krásy Slovenska with Dajama and books about Slovakia with this publishing house.

TSS: You have also started to publish books about individual regions and towns using old postcards.
DK: Old postcards are an excellent source of information for geographers, historians and archaeologists. They often show places that do not exist any more, which makes it difficult to get this information. And for the general public they can evoke nostalgia.

We started publishing these books four years ago, when we didn’t have a clue what the interest in them would be. But people are really interested. We have published 11 books in this edition so far and our plans are extensive.

TSS: Will you continue writing the books on your own and with your colleagues?
DK: It is not within the power of our small team, which is just five people, to cover everything. Moreover, the books have become more specialised, so an archaeologist writes the book about archaeological sites, a historian writes about medieval churches, and so on.

TSS: What are you plans?
DK: I want to stick to publishing books by our authors about Slovakia, no translations of foreign books. So this year’s production of 30 books is the ceiling.

TSS: Is it difficult to publish books in Slovakia?
DK: We were able to take over a niche that was empty in the 1990s. During communism the Šport publishing house published guidebooks.

The most important thing is to have a system and concept. Other publishers sometimes publish books about Slovakia, but they pick only the “creme de la creme”, such as Bratislava or the High Tatras. We cover everything. So our readers know that our motivation is to create good, appealing books with reliable information that leave no place or topic uncovered.

TSS: What are your publishing dreams?
DK: I come from Majcichov, a small village near Trnava. I have already written a monograph about Majcichov, but I’m not satisfied with its graphics and design. So this is my first dream – to give my village a proper monograph.

My second dream is to publish Notitia Hungariae by Matej Bel (1684-1749) in Slovak. Matej Bel was a scholar who lived during the reign of Empress Maria Theresa, and he is my example in geography and exploring. He wrote this huge work in Latin that contains ancient guidebooks about the countries of historical Hungary. These are beautiful works. So far, only the parts about Turiec county and Bratislava county have been published. I would add information about what has changed compared with the 18th century.

TSS: What are your observations about Slovaks’ interest in books about their country?
DK: It is increasing. The 1990s were wild years, with a regime having fallen and a new system developing. People were hungry for information about foreign countries and often forgot what we have here. Colleagues from the tourism industry have also confirmed that the interest in Slovakia is increasing among locals. And most of the new subscribers to Krásy Slovenska are young people.

I am a happy man, for whom my hobby has become a job. Slovakia is a beautiful country with wonderful nature and rich historical and cultural heritage, much of which has not been covered in books yet.