Christmas market is as popular as ever

SOME stores start selling Christmas decorations in October. But for many Bratislavans, the opening of the city’s annual Christmas market is the true beginning of the holiday season. 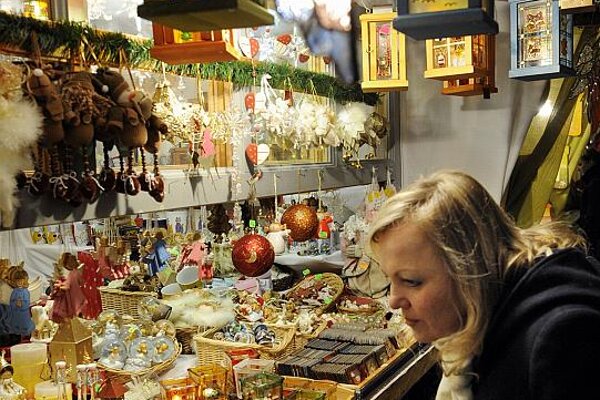 SOME stores start selling Christmas decorations in October. But for many Bratislavans, the opening of the city’s annual Christmas market is the true beginning of the holiday season.

This year’s market opened on November 28. It is located on the Main Square, where it has been since first opening in 1993. Its 107 stands will serve food and sell handmade folk products to locals and foreigners alike until December 23.

About one third of the stands sell food and drinks. The traditional delicacies on offer include cigánska pečienka (roasted pork or chicken in a bun topped with grilled onion and mustard); lokše (potato crepes) stuffed with goose fat, poppy, or cabbage; varené víno (mulled wine); punč (alcoholic punch); and hriatô (plum brandy with a top layer of fried fat).

Some of the stands with Christmas gifts sell CDs and books, while others offer handmade products such as candles, woollen caps, scarves and ceramic products. Shows for children and performances by Slovak pop and folk groups foster the festive spirit.

“It’s hard to tell the number of visitors, but it is estimated at several hundred thousand this year,” Eva Chudinová from the Bratislava City Council told The Slovak Spectator. “This number leads the city to believe that the global financial crisis will not have an impact on the market. After all, the market is not only about buying traditional food and drinks. It is also about meeting people during the Advent season.”

That’s exactly what the city wanted to achieve. Inspired by similar markets in Vienna, Brussels, and Strasbourg, the market was created to give residents and tourists a place to gather during the holidays.

In fact, the market successfully attracts tourists from around the world. During a recent visit several languages were heard: Japanese, German, Russian, English, Polish and Czech.

“The response from tourists has been very good,” Chudinová said. “They appreciate the ‘small, cute and cosy’ atmosphere, especially in comparison to capitals like Prague and Vienna.”

A woman from a group of Japanese tourists had a similar opinion.

“We are touring Bratislava, Vienna and Prague, and [the market in Bratislava] is really beautiful,” she told The Slovak Spectator.

“Bratislavans share the impression that it’s not about shopping, but about the need for people to meet and wish each other a Merry Christmas.”