Prime Minister Robert Fico described journalists from the country’s major dailies as “idiots” for how they covered his official visit to Vietnam, the reconstruction of the government's offices, the Belarus Embassy and the financial crisis. 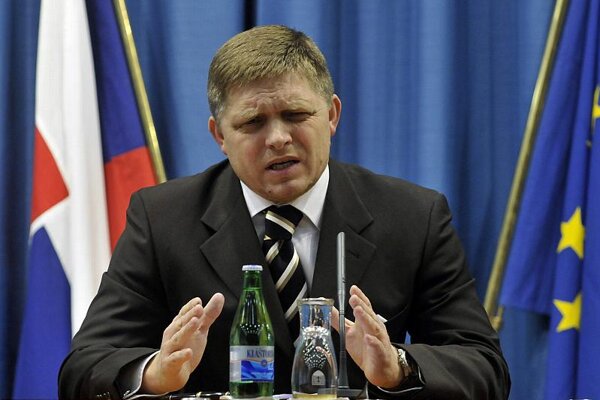 Prime Minister Robert Fico described journalists from the country’s major dailies as “idiots” for how they covered his official visit to Vietnam, the reconstruction of the government's offices, the Belarus Embassy and the financial crisis.

“You're attacking the government in a foolish, idiotic way,” he said. “Lies, lies and more lies. I'm asking you to at least be a little bit accurate towards this government. The Communist press used to be more tolerant towards dissidents than you are towards the democratic government of Slovakia.”

Fico (above) has had a rocky relationship with the press since taking office in July 2006, and has repeatedly claimed that coverage of his leftist-nationalist government was biased. The media, in turn, has called on the prime minister to be more moderate in his choice of language.

“Only an idiot would publish a front page showing hundreds of people losing their jobs (because of the crisis), followed by a headline that reads: “Fico is chasing a billion-crown-deal for J&T,” the prime minister said, referring to a financial group that enjoys good relations with his Smer party.

As for his October trip to Vietnam, Fico said he had lobbied on behalf of Slovak company SES Tlmače, which is looking to supply boilers to a Vietnamese thermal plant. Any prime minister would work hard to achieve a deal that could secure jobs for 2,200 people for 10 years, he said.

“And then some idiot writes that I'm doing a deal for J&T,” he complained. SES Tlmače is controlled by J&T.

In response, the Slovak branch of the Association of European Journalists (AEJ) called on Fico to exercise more self-control.

“Politicians in democratic countries, especially those in ruling positions, are under pressure from the responsibility to govern, as well as from the opposition and the media, who scrutinize their steps and behavior… This does not excuse a politician who holds a post of responsibility for reacting in an oafish, rough and aggressive manner.”