The Nays have it

Ján Tomáš is an unusual kind of businessman in Slovakia. He didn’t privatize anything, he didn’t win any big state tenders or benefit from a close relationship with a political party. Instead, he grew his electronics retailing business over 16 years literally from out of the back of a Škoda to a network of several dozen stores across Slovakia. In December 2008, Nay opened its first two stores in the Czech Republic, the first step in a strategy of regional expansion and possible acquisitions. 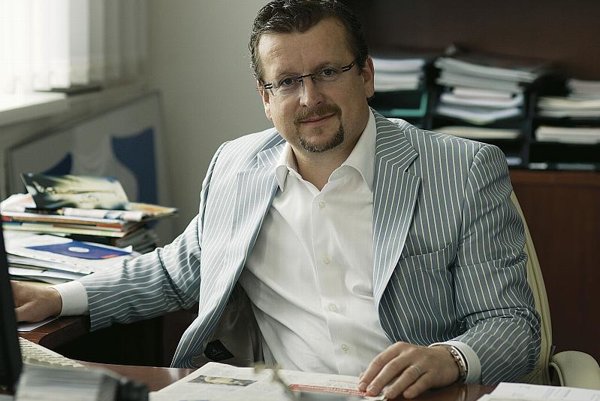 A decade after switching from wholesale to retail, Nay CEO Ján Tomáš is expanding to the Czech Republic. (Source: Courtesy of Ján Tomáš)
Font size:A-|A+

Ján Tomáš is an unusual kind of businessman in Slovakia. He didn’t privatize anything, he didn’t win any big state tenders or benefit from a close relationship with a political party. Instead, he grew his electronics retailing business over 16 years literally from out of the back of a Škoda to a network of several dozen stores across Slovakia. In December 2008, Nay opened its first two stores in the Czech Republic, the first step in a strategy of regional expansion and possible acquisitions.

How did you and your partner Peter Zalešák get started?
We got to know each other at university. He was studying electronics, I was in chemistry. We also danced together in a folklore group, which meant we went on foreign trips together. That gave us some idea of how things worked abroad, so when the wall went down, we weren’t just standing around saying ‘wow’.

Why electronics?
I was in research, but I never really enjoyed chemistry. At the research lab we got a computer, a PC 208, one of the first models, and no one knew what to do with it. So I took it upon myself to learn how it worked, I studied the operating system. I really got into it, to the point that I realized it was probably the better path for me. So naturally, when my partner and I went into business, that business was electronics.

Jozef Majský, one of Slovakia’s most controversial businessmen, once said that he made his first big money importing computers while everyone else was protesting Communism on Slovakia’s town squares, and by selling them for hugely inflated prices to crooked managers of state companies. How did your business work?
We took a different path, because we never worked for state firms or took part in state tenders. From the beginning we were focused on the individual, on the final consumer. After the revolution, when we started to do business in electronics, there was a tremendous lack of that kind of technology, people lacked televisions and stereos. So we would collect German marks from people, wait for two or three months until the orders we had would fill our old Škoda. Finally, we would head to Germany, buy the goods, and then give our customers customs invoices, which they would fill out and go pick up their orders. We never made any huge money from it, but it grew step by step.

You had an outlet in Moravia as well, but when Czechoslovakia split, you decided to concentrate on Slovakia, even though it was a much smaller market with lower purchasing power. Why?
Of course, most of our business activities were focused on the Czech territory because it was the bigger market, but when the country split we decided to focus on Slovakia, because suddenly there were all kinds of customs barriers to doing business in the Czech Republic. So we shut down our Czech operations and set about building something in Slovakia.

But why didn’t you get out of Slovakia and stay on the Czech market?
We could have decided that way, but we would have had to move to Prague or maybe to Brno. And we’re Slovak, so we told ourselves that’s just the way the cookie crumbles, the situation is what it is, and we have to make the best of it. But we didn’t dwell on it, and luckily the Slovak market soon started to develop.

What did you think of the decision to split Czechoslovakia?
In business terms it was negative for us, because we lost two-thirds of our market. Today it’s clear that if we had been able to continue operating on the entire market, we would be further ahead than we are.
From the political and social point of view, the years of the authoritarian Mečiar government from 1994 to 1998 were a dark period in Slovakia’s history.

GDP was growing strongly?
We never had any connections with any political party or government, so we were neither artificially benefited nor hindered during these years.

Not even indirectly by anti-progressive laws like the customs surcharge, which made your products more expensive?
You’re right, the extra import duty of 20% did affect us, but the truth is that not everyone paid it. About 90% of imports were done on the black market. If everyone imported legally, then you would just factor the surcharge in, and the customer either buys it or doesn’t buy it. But back then there was a big problem with smuggling by criminals and semi-criminal elements, with the goods being sold from garages or from the backs of trucks. In the 1990s we had a 5% market share. The state thought it was going to make a lot of money out of the customs surcharge, but given that such a small share of goods arrived through legal channels like ours, it brought them virtually nothing. It’s often the case that when the state interferes with the market, it has the opposite effect to what was intended.

In 1998, the year Mečiar was replaced by the pro-Western Dzurinda government, you also changed your business model.
Yes, we changed from being a wholesaler to a retailer, and we started buying up shops across the country to sell our products from. In 1998 the market really started to take off, and all international producers like Sony, Panasonic and Philips began to open up branches in Slovakia. If we hadn’t taken this step, they would have taken 80% of our turnover away from us, because these were precisely the brands we had been distributing. But we had already seen how Mediamarkt did it in Germany, and we realized that consumers probably preferred to have a wide range of products and different brands all in one location.

So yes, 1998 was a watershed year for us. And this month (December) we are opening our 24th location in Slovakia and our first two stores in the Czech Republic. Ten years after our first big decision we have another – our Czech comeback.
You sold a 48% stake in Nay to the private equity firm Enterprise Investors in 2005 for 18 million euros. Why?
We originally didn’t want a financial investor because we didn’t need finances. At that point we had no debts, no need of money for expansion. We had a turnover of 3.5 to 4 billion crowns. The only thing we were thinking of was maybe a brand partner, but our talks in that direction broke down. After we lost our strategic partner, Enterprise came along, and we basically said ‘why not’. Besides cash they brought a lot of dynamism, they made our expansion much quicker.

How long before they sell out and recoup their investment?
So far they are not planning to leave. There was talk about exiting through an IPO, but in the current economic conditions that would be suicide. So we have put aside these plans and focused on expansion to neighboring markets, possibly making acquisitions in our sector.

Does that mean the Slovak market is fished out as far as you are concerned?
The only way we can maintain the growth curve we have is to expand abroad, because Slovakia is a small marker, and we have such coverage now that each new shop we open doesn’t raise our market share proportionally, but ends up taking business away from our existing stores. We have a 25-26% market share now, and our goal is 30%, but adding each extra percent is making less and less economic sense. The Czech market, when you take into account purchasing power, is about three times the size of the Slovak market, so if take an organic approach to growth, we’ll have all the business we can handle.

The ties that bind

Ján Tomáš hails from Vranov nad Topľou in Eastern Slovakia. During Communism, his father ran the economic division of the Bukoza firm, which was the leading company in the region at the time. He wanted his son to follow in his footsteps, but was initially disappointed.

“I was stubborn, and I told him that if he was an economist, that was a good enough reason for me not to become one,” Tomáš said. “Of course, I ended up in business, which is a source of satisfaction to him.”

Years later, Tomáš finds himself in the same situation with his own son, who chucked school and started working at a bar. “I think it’s good for him to find out what real manual work is all about, and I know enough not to pressure him, it only has the opposite effect.”

Many people who like Tomáš move to the Slovak capital from towns in Eastern Slovakia keep up ties with other people from their hometown. These informal networks in many cases are large and relatively powerful, containing judges, lawyers, academics, politicians, business people, teachers, police officers and soldiers, all of whom exchange favors and information on the basis of their regional tie.

“It’s just like that with us,” Tomáš said. “There are quite a lot of us Vranov people in important posts, like the head of the Komunálna poisťovňa insurer, Martin Knut who owns an advertising agency, and Ivan Mikloš who is a former finance minister and today an MP.”

Tomáš actually set up a network in 1997 called Vranov Region, whose members meet once a month in a pub, organize an annual ball, and maintain contacts with their home region. “We try to help each other out wherever possible, and we do business together wherever we can,” Tomáš said. “But we are already looking for a younger generation to come along and take a few things off our hands, like organizing the ball.”