All hands against him

At the height of his powers, Mikuláš Černák was almost a caricature of an Eastern European gangster. He sported a cheesy moustache, sunglasses and a massive chest. He kept Siberian tigers at his house, and had his 30th birthday party televised on the most-watched channel, Markíza. 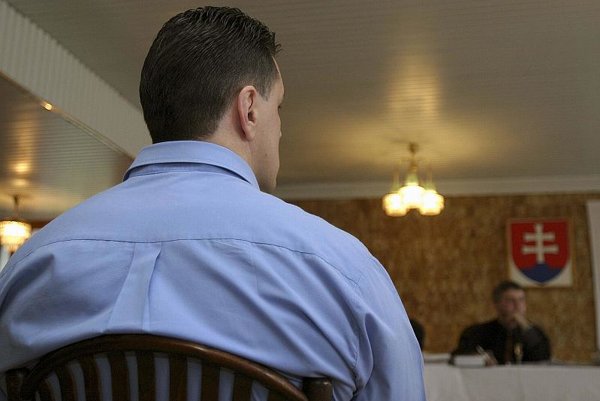 Police say that with half of potential witnesses dead or missing, only Černák’s former henchmen can keep him in jail. (Source: ČTK)
Font size:A-|A+  Comments disabled

At the height of his powers, Mikuláš Černák was almost a caricature of an Eastern European gangster. He sported a cheesy moustache, sunglasses and a massive chest. He kept Siberian tigers at his house, and had his 30th birthday party televised on the most-watched channel, Markíza.

But above all, according to the police, he was a killer, a man whose unpredictable violence kept even his closest associates in fear of their lives.

Eleven years since he first turned himself in to the police on murder charges, Černák remains behind bars, and is currently on trial for another seven murders he is accused of committing himself or ordering others to carry out. For the Slovak police, indeed for the country’s entire justice system, keeping Černák in jail has become a fundamental test of credibility.

Černák, 42, was born in the Horehronie (Upper Hron River) district of Central Slovakia, in the village of Telgárt, one of the coldest and poorest areas in the country. He trained as a car mechanic but for years drove a bus before going into crime full time. According to a source close to the prosecution, one of his first major illicit sources of income was smuggling horses over the border between Slovakia and Poland.

“Even before he became well known in Slovakia, he was referred to with respect in Poland,” the source said.

Černák’s first base of operations was the town of Brezno, where according to a police source he and his gang would kidnap and extort bar and restaurant owners. From there the gang moved into Banská Bystrica, the largest city in Central Slovakia, and pushed out the local competition. By 1995, he was well established in the area, enjoying friendly relations with the Tibor Pápay gang of Dunajská Streda in the south, and with Miroslav Sýkora’s group in Bratislava. “He was very good at sensing how strong the competition was, and if he felt he couldn’t take them – Pápay had international backing and some very tough guys, for example – he would fall over himself to be friendly. Otherwise he was ruthless.”

Černák’s influence spread west to Prievidza, where the Mello brothers came under his sway, down south and east to Lučenec and Košice, where he had ties with boss Karol Kolárik, and towards Poprad and Kežmarok in the northeast. Although underworld boss Milan Reichel was originally far stronger in Poprad – “Černák worshipped him”, according to one source – after Reichel fled a warrant for his arrest, Černák expanded into his vacant territory.

According to police, along with traditional criminal enterprises such as extortion, Černák also played a role in the largest fraud devised by Slovak organized crime, the sale of chemically altered mineral oil as diesel. The scam allegedly netted billions of crowns over more than a decade, with the criminals pocketing the huge difference in taxes between the fake diesel and the real item.

In January 1995, for example, Černák started the Sargon company in Bratislava with Jozef Oleš, who was taken into police custody in 2004 as the alleged ringleader of the fuel scam. Other members of the company included Miloš Kaštan, Černák’s accountant, and Branislav Škubla, who wound up dead a few years later.

For such a wide-ranging criminal enterprise, Černák inevitably needed political backing, and this he allegedly found through the secret service, or SIS. According to a member of the Bratislava underworld, the SIS had originally come to an arrangement with Sýkora, in which the Bratislava ‘boss of bosses’ would perform dirty work for the service to keep it at arms length from criminal activity. After Sýkora’s murder in February 1997, however, SIS deputy director Jaroslav Svěchota allegedly approached Černák to make a new deal. “That’s when everything started going downhill,” the underworld source said.

Apparently expecting his political backers to protect him, Černák and his henchman Ján Kán turned themselves into police in December 1997. For unknown reasons, however – possibly the approach of elections in September 1998 and the reluctance of the Vladimír Mečiar government to be seen aiding and abetting Černák – the two gangsters were not released, but instead were eventually tried for the kidnapping and murder of Grzegorz Szymanek. They were found not guilty, but Černák has been behind bars ever since on a variety of other charges, except for a brief period in 2003 when he was released on parole and fled to the Czech Republic. On being caught and extradited, he was returned to jail.

Now, however, the stakes have been raised. Černák is on trial for committing six murders, including cutting off the head of ex-policeman Gustav Slivenský, and disposing of the man believed to have killed ex-policeman Robert Remiaš, Imrich Oláh. The Banská Bystrica mob boss is also accused of having ordered the murder of a witness against him, Marián Karcel, by using the services of hired gun Branislav Adamčo.

A police source said investigators believe Černák may have killed at least 39 people.
Černák has admitted to being present at some of the killings, but has denied carrying them out. He has also criticized the fact that so many of his former gang members are now testifying against him, rather than facing charges themselves. “The legal system in Slovakia allows such people to be turned into witnesses against one man,” he complained.

Kaštan claimed in court that he saw Černák commit murder, as did Slavomír Surový, once employed as Černák’s ‘starter’ (whose job it is to start the boss’ car to make sure there are no explosive devices attached to the ignition). Another accomplice, Michal Moravčík, testified that he had ordered Karcel’s murder, while Černák’s former idol, Milan Reichel, accused him of committing two murders.

Given that the new head of the police Organized Crime Unit (ÚBOK), Ivan Ševčík, used to lead the investigation against Černák, and that Ševčík has put several former Černák team members into top positions at ÚBOK, some have questioned the strategy the prosecution has chosen. It’s as if, they say, the investigation team is so eager to see Černák behind bars permanently, which would be a boost to their careers, that they are willing to offer sweetheart deals to serious criminals from his former gang to nail him.

But sources close to the prosecution argue that the strategy is sensible. For one thing, as soon as any of the current witnesses was charged, he would naturally refuse to testify, and would thus be lost to the prosecution. Černák had something similar in mind himself, the source said, when he offered to confess to some killings as long as the entire group was tried as an organized gang. “If we had been stupid enough to fall for that, we would have lost all our witnesses,” the source said. “We had to face the facts – half of the witnesses are now already dead or missing. It was these guys or no one.”

Investigators also argue that Černák’s former accomplices are far less dangerous than the boss himself, and that society’s interests are best served by making sure that Černák stays locked up. “I sat in on most of those interrogations, and these guys were terrified of him,” a source said. “He would call them up in the middle of the night and tell them to get dressed and go downstairs. They would have no idea where they were going and what they would have to do when they got there. At the slightest hesitation he would be capable of shooting any gang member on the spot. We even intercepted a few SMS messages from gang members saying that Černák was taking them out into the woods, and they were afraid they weren’t coming back. And quite a few of them didn’t.”

The trial was adjourned in mid-December to continue in the New Year with testimony from four witnesses who did not show up at the assigned times. Despite the strength of their case, however, some in the prosecution are still worried that the Prešov district court’s ruling might go against them.

In particular, they are concerned by the decision of the Bratislava District 1 court in November to reject murder charges against Adamčo and two accomplices, forcing the prosecutor and investigators to begin compiling their case again. Adamčo, Jozef Balogh and Nikola Pajdič allegedly shot and killed a nine-year-old boy, Riško Gál, and his father’s girlfriend, Henrieta Brestovanská, after mistaking them for the father, former policeman Juraj Gál. Even after realizing their mistake, the murderers allegedly fired a final, lethal shot into the seriously injured boy’s head in December 2004.

The court ruled that the police should have waited for Hungary to issue a decision on deporting Adamčo before they started investigating him. However, a police source ridiculed the argument. “Look, you can’t get a Europe-wide warrant issued unless you are actually accusing the guy of doing something,” the source said. “That’s just ridiculous.”

However, it is feared that if the Bratislava Regional Court upholds the ruling, it could set a precedent as well in the case of Černák, who was extradited from the Czech Republic in 2003 to face murder charges.