Bubbles in the bottle

Even though Slovaks have never been great sparkling wine drinkers, there is one day in the year when a bottle of bubbly appears on the tables of most families – New Year’s Eve. 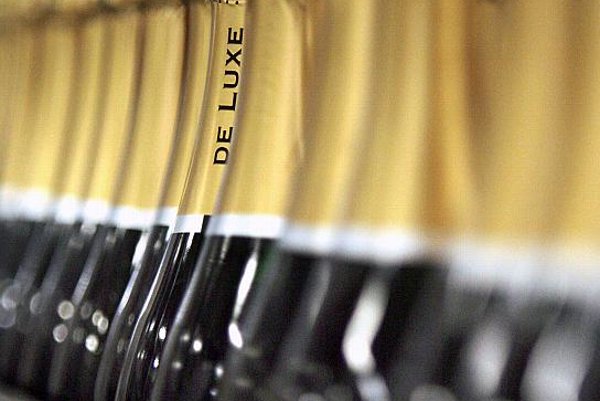 Even though Slovaks have never been great sparkling wine drinkers, there is one day in the year when a bottle of bubbly appears on the tables of most families – New Year’s Eve.

Sparking wine is regarded as a specialty that ranks high among wine varieties. A special type of soil is needed for growing the grapes that are suitable for making sekt, while expert vintners are essential as well. Slovakia has both, resulting in a long tradition of producing this fine wine.

Sekt making in this country goes back to 1825, when the first factory in Europe outside France for producing sparkling wines by traditional methods was founded in Bratislava. Hubert J.E, as this Slovak traditional sparkling wine producer is known, remains the largest in the country, but is now located in Sereď, where it moved in 1952.

During the Communist regime, Hubert was the only large producer of sparkling wine in the country, but the arrival of democracy brought more competition. Vintners like Hacaj, Víno Matyšák, Víno Nitra and Villa Víno Rača Chateau, all located in Western Slovakia, also make sparkling wine.

“The tradition of sparkling wine production in Slovakia is very rich,” said Ján Hacaj, who with his brother Vladimír owns and runs the Hacaj winemaker in Pezinok. “Before the Communists there were a number of firms that produced sparkling wine, but during the regime they were abolished, and only one state company remained.”

“The climate as well as the soil quality resembles the Champagne region, which is another reason why the production of sparkling wine was launched here about 200 years ago.”

The local soil has a higher content of calcite (in Champagne the calcite comes from chalk, while in the Small Carpathians it is associated with limestone, slate and granite), which makes it suitable for producing Chardonnay as well as various Burgundies.

Champagne is not just a region, of course - it also refers to the sparkling wine that is produced there, and which is the only bubbly that has the right to use the name. It is produced from three basic grape varieties, Chardonnay, Pinot Noir and Pinot Meunier. In Slovakia, meanwhile, sparkling wine producers also use Rheinriesling, Welschriesling and Green Veltliner, typical of the Small Carpathian region.

Although Slovak sparkling wine makers use the traditional method or méthode classique, they are not trying to produce a copy of the original Champagne.

“European consumers are divided into two camps,” said Štefan Ailer, head of production and technology at Hubert J.E. Sereď. “On the one hand you have people who prefer the French variety of sparkling wine, which is heavy, or the European type, which is fruity. Others prefer the sparking wine produced in the Czech Republic, Hungary, Germany and Slovakia. So we don’t try to produce sparkling wines that resemble Champagne, even though we use top quality production methods. In Slovakia, consumers do not demand this kind of sekt.”

Hacaj agreed, even though his company also makes sparkling wine that resembles Champagne.

“In Slovakia, people are used to drinking younger vintages, fresher sparkling wines,” he said. “The original Champagne matures in bottles with yeast for many years, which changes the sensorial characteristics of the wine significantly.”

Plenty of sparkling wines on offer

In general, sparkling wine is produced by secondary fermentation, which results in high levels of carbon dioxide, creating the fizz.

Under the traditional method, bottles are filled with a cuveé, which is a mixture of still wines from several grape varieties to get a balanced wine with a harmonized taste that does not change from year to year. To bring a cuvée to secondary fermentation, a liqueur de tirage is added, consisting of precisely measured portions of wine containing dissolved sugar and pure yeast culture. In order to be able to remove the yeast residue after the fermentation process is complete and the wine has been aged and stored for several months, the bottles are kept in pupitres where they undergo manual riddling until all the yeast particles settle on the crown cap.

During the riddling stage, the bottles change position from horizontal (at the beginning) to almost vertical (at the end of the process). In accordance with precise and time-tested rules, the bottles are also rotated clockwise and counter-clockwise in turn. When the riddling process is over, the bottles are submerged bottoms-up in an ice bath, where some of the sparkling wine, along with the settled and riddled yeast residue, freezes onto the cap. When the bottle is opened, this mass pops out of the bottle due to the internal pressure. The volume that is lost is compensated by the liqueur de dosage, which is also used to make final adjustments to the residual sugar content in the wine. The bottle is then re-closed with cork, and is secured against opening with a wire hood.

The Sereď-based factory produces most of its sparkling wine using the Charmat method. In this case, the secondary fermentation takes place in large steel containers, and only then is the wine bottled.

The company uses also the Méthode Transvasage, according to which the secondary fermentation takes place in bottles, following which the wine is emptied into metal tanks. The yeast deposits are removed by filtering the wine prior to bottling. The popularity of such sparking wine is increasing, with Hubert reporting sales up 40% in 2007 to 202,000 bottles.

Hubert’s second most sold sparkling wine is produced by the Asti method. Last year the company sold 1.8 million bottles of this wine, up almost 20%. Under the Asti production method differs, the sparkling wine results from an interrupted primary fermentation of aromatic white wine varieties such as Irsai Oliver, Muscat Ottonel and Moravian Muscat.

Hacaj produces its sparkling wine only by the traditional method of secondary fermentation directly in the bottles. “All of the technological operations that are involved in this highly complex production process are performed manually,” Hacaj said.

Although the Hacaj family has a long winemaking tradition, its sparkling wine is a relatively new product.

“We produced our first sparkling wine in 1984, when my brother did it as a part of his degree at university,” Hacaj said. “After that we started doing it every year, but only for our own consumption. We launched our sparkling wine line on the market in 2000, calling it Millennium Sekt.”

The Víno Matyšák winemaker started producing sekt in 2003 to extend the assortment of wines offered in its restaurants.

“We produce sparking wine from Chardonnay, Pinot Noir, Pinot Blanc and Welschriesling,” CEO Jaroslav Žák said. “We produce about 1,000 liters annually, but we have no plans to extend our production and offer our sparkling wine for distribution.”
According to Ailer of Hubert J.E., the average Slovak drinks 1.3 liters of sparkling wine a year, while the average German consumes 3.6 liters.
“We don’t expect the consumption of sparkling wine in Slovakia to increase, but we would like to see consumption spread more evenly over the year, not just at Christmas and Easter,” Ailer said.