MOST of central and eastern Europe has entered 2009 with a major gas-supply headache. Russia cut the flow of natural gas to most of its European customers and by January 7 the flow to Slovakia and other European countries had stopped completely. 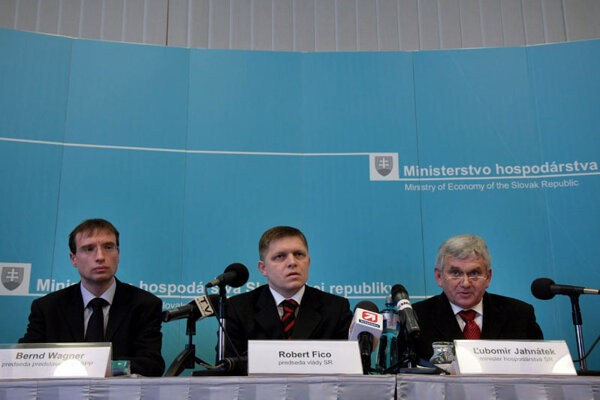 MOST of central and eastern Europe has entered 2009 with a major gas-supply headache. Russia cut the flow of natural gas to most of its European customers and by January 7 the flow to Slovakia and other European countries had stopped completely.

Due to the limited delivery of gas from Russia and its subsequent stoppage, a state of emergency has been announced in Slovakia. Slovakia started to draw from its own reserves while several companies were forced to limit or completely stop production. Gas supplies to households have not been affected.

About 1,000 Slovak businesses must significantly reduce their usage of gas in Slovakia, Economy Minister Ľubomír Jahnátek told a press conference on January 7.

If businesses, which have an agreed annual purchase of over 60,000 cubic metres of gas, fail to stick to the limitations, gas deliveries to eastern Slovakia might be threatened, Jahnátek told journalists.

“All the corporate customers must keep a usage discipline to only cover the technological safety of their facilities,” Jahnátek said.

For example, the major steel maker U.S. Steel Košice, oil refinery Slovnaft and car makers Kia and PSA Peugeot Citroen have had to limit their production.

The Agriculture Ministry requested that Jahnátek grant an exception for food processing companies.

“Unfortunately, this is not acceptable,” Jahnátek said, adding that if the state starts granting exceptions the whole system would fall apart.

After the second block of the V1 nuclear power plant in Jaslovské Bohunice was phased out on December 31, 2008, most of the support services for the electricity network are provided by suppliers that use gas. Jahnátek suggested that if these suppliers fail to operate then electricity supplies might be affected as well.

Slovakia turned off the second block of V1 to meet its obligations under the EU accession treaty.

However, Prime Minister Robert Fico suggested that if the Russian-Ukrainian dispute continues, Slovakia might search for a “non-standard solution” by which he meant re-launching operations at the second block of Jaslovské Bohunice.

Both Fico and Jahnátek confirmed that gas supplies for households are not threatened.

Slovakia’s estimated consumption at current temperatures is 30 million cubic metres of gas per day. Now the country is drawing gas from the storage facilities of the dominant gas utility, Slovenský Plynárenský Priemysel (SPP).

There are about two billion cubic metres of gas in the storage reservoirs, Jahnátek said, adding that these supplies are enough to cover the needs of households during the entire winter. SPP has confirmed that it is able to supply gas for households for about 70 to 80 days.

“We are facing the biggest fall in gas supplies in our history,” said the chairman of SPP’s board of directors, Bernd Wagner, at a special press conference on January 6.

The gas crisis paralysing Europe is a result of a dispute between Russia and Ukraine, ostensibly over missed payments for gas imported by Ukraine. On January 1, Russia cut off gas it supplies to Ukraine over the dispute, which also involves the size of the debt and future pricing levels. All of Slovakia’s gas imports come from Russia, via Ukraine.

Meanwhile, the European Commission demanded the immediate restoration of gas supplies to Europe and for the two parties, Russia and Ukraine, to resume negotiations over their bilateral commercial dispute. The EU gets about a fifth of its gas from Russia via pipelines through Ukraine.

“Without prior warning and in clear contradiction of the reassurances given by the highest Russian and Ukrainian authorities to the European Union, gas supplies to some EU member states have been substantially cut,” the European Commission (EC) said in an official release.

“This is completely unacceptable,” it added.

On January 6, representatives from Eurogas, the European organisation of natural gas suppliers, met European Energy Commissioner Andris Piebalgs and urged both Russia and Ukraine to respect their contractual supply and transit obligations.

“Both parties should be aware of the negative impact and the damage this dispute might generate,” the EC said. “It is necessary to reach not only a solution to this immediate problem but to arrive at a sound common agreement for the longer term to avoid the risk of future disputes.”

Alexander Duleba, a political analyst at the Slovak Foreign Policy Association (SFPA) nongovernmental think-tank, said he did not expect the dispute to last more than a month.

“The Russians simply cannot afford a long embargo and to not supply natural gas, as they get money for it,” Duleba explained for The Slovak Spectator. “This is the raw material which they do have.”

According to Duleba, Russia intends the gas price not to decline too much. Currently, the price for a barrel of oil has declined rapidly – from almost $150 for a barrel in June 2008 to the current price of less than $50 per barrel. The price of natural gas is linked to the price of oil.

Russia and Ukraine differ over the amount owed: Russia says Ukraine owes them $2 billion while the Ukrainians say it is only $1.522 billion.

Duleba also says that Ukraine objects to the low transit fee it receives for transporting the gas while being asked to buy gas at regular market prices.

According to Duleba, Slovakia needs to reduce its dependency on Russia oil and gas.

The need to diversify was proven in 2006 when Russia limited its supplies to Slovakia.

“Now we have this situation for the second time,” Duleba emphasised.

But neither Jahnátek nor Fico stressed the ned for diversification.

Jahnátek said that the ministry includes in its strategy of energy security further diversification of sources while assuming that gas and oil deliveries will continue without problems anyway.

“Political stability in other regions, where there are alternative sources, is substantially lower than in the Russian Federation,” Jahnátek told The Slovak Spectator.

According to Fico, the dependence of Europe on Russian gas will increase in the next few decades, the TASR newswire wrote.

“In the years 2020, 2030, this dependency will be much higher than it is now,” he said. “Each year, we witness this ritual when it comes to disputes between Ukraine and Russia over prices. We have no reason to get nervous.”