PRESIDENT Ivan Gašparovič has refused to sign an amendment passed by parliament, which would have allowed geographical names in school textbooks for Hungarian language schools to be written in Hungarian. According to Gašparovič, the amendment contradicts several laws and he returned it to parliament. 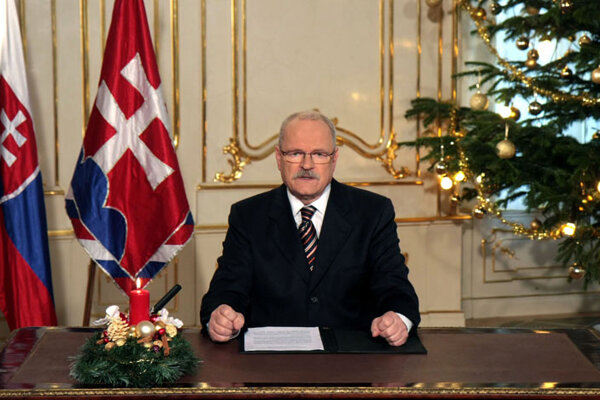 PRESIDENT Ivan Gašparovič has refused to sign an amendment passed by parliament, which would have allowed geographical names in school textbooks for Hungarian language schools to be written in Hungarian. According to Gašparovič, the amendment contradicts several laws and he returned it to parliament.

Prime Minister Robert Fico commented sceptically on the possibility of it being re-approved in parliament even though the amendment was passed mainly with the support of MPs from the ruling party Smer, which Fico leads. “I am not very optimistic when it comes to a repeat approval of this act,” Fico said for news channel TA3 on January 4.

Political analysts and opposition representatives say that by not signing the amendment Gašparovič pandered to the wishes of the Slovak National Party (SNS), which had sharply objected to it.

A statement provided to the media by the president’s office, was worded ambiguously, allowing for several different interpretations.

"Giving geographical names in textbooks published in the language of an ethnic minority requires amendment of several laws for the sake of the principle of legal state and unification of the legal order of the Slovak Republic,” reads the reasoning of the President’s decision.

The duty of President in the legislative sphere is, according to Gašparovič, to return the bill to parliament if he finds that it is not in compliance with the Slovak Constitution or legislation.

In an interview for the SITA newswire on December 29, 2008, Gašparovič recalled that at a meeting in Nové Zámky with Hungarian President László Sólyom in early December, he declared his support for textbooks in two languages, “but not in such a form as that which had been approved”.

The amendment was passed with support of 107 of 124 MPs present. In Slovakia, bills and amendments passed by parliament must also be signed by the President. If he refuses, the bill returns to parliament.

The conflict surrounding textbooks started in September when the Education Ministry lead by Ján Mikolaj (SNS) changed the geography textbooks for elementary schools with Hungarian language instruction so that names were written in Slovak.

The SNS, a junior member of the ruling coalition, was willing only to accept a solution guaranteeing that geographical names would be printed first in Slovak in textbooks. SNS chairman Ján Slota sent an open letter to the president asking him to not sign the amendment.

Former Education Minister, László Szigeti, currently an MP for the opposition Hungarian Coalition Party (SMK) told Slovak Radio on December 19 that the president succumbed to pressure from the SNS.

“In a way, he [Gašparovič] confirmed that he fails to be an impartial President of the Slovak Republic,” Szigeti stated.

The Hungarian Foreign Affairs Ministry (FAM) was disappointed. “We can only hope that the Slovak parliament will find a solution acceptable for Hungarians living in Slovakia,” said Lajos Szelestey, spokesman of the FAM, as quoted by the Sme daily on December 29.

At a meeting with the Hungarian prime minister, Ferenc Gyurcsány, in Komárno, Prime Minister Fico publicly promised the publication of double-language textbooks.

He said, according to SITA, that textbooks for Hungarian schools in Slovakia would be replaced based on the requirements of the minority. “We will solve it so that everybody will be satisfied,” he said.

Political analysts are convinced that President Gašparovič met the wishes of the SNS by not signing the amendment. According to political analyst Miroslav Kusý, Gašparovič also knew that the Smer party would not reproach him for doing so.

Voting for the amendment was, according to Kusý, only a mask for Smer MPs due to international pressures. “Smer will not be bothered at all that Gašparovič obliged Slota,” Kusý stressed.

Political analyst László Öllős added his opinion that the amendment neither contradicted the Constitution nor other Slovak laws. On the contrary, Öllős noted that the Slovak Constitution states that minorities have the right to use their mother tongue.

Öllős stressed that writing geographical names in the languages of minorities is guaranteed by international legal norms which Slovakia has officially ratified.

These are the Council of Europe’s European Charter for Regional or Minority Languages and its Framework Convention for the Protection of National Minorities.

The Charter allows and/or encourages “the use or adoption, if necessary in conjunction with the name in the official language(s), of traditional and correct forms of place-names in regional or minority languages.”

The Convention requires “in areas traditionally inhabited by substantial numbers of persons belonging to a national minority... to display traditional local names, street names and other topographical indications intended for the public also in the minority language when there is a sufficient demand for such indications”.

Jozef Plško, the spokesman of the speaker of parliament, said that MPs will deal with the amendment again during their February 2009 legislative session.