WITH temperatures dropping below zero in the winter months, homeless people face many more risks than in other seasons. The problem of people living in the streets is an issue mainly in larger cities where the greatest numbers of homeless people are concentrated. 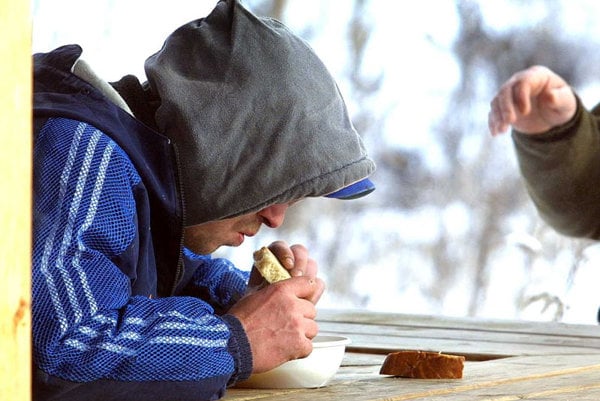 WITH temperatures dropping below zero in the winter months, homeless people face many more risks than in other seasons. The problem of people living in the streets is an issue mainly in larger cities where the greatest numbers of homeless people are concentrated.

Bratislava and Košice now claim to be ready for the upcoming months when freezing weather is expected to continue.

According to Eva Chudinová, spokeswoman of the capital city of Bratislava, there were around 600 homeless in 2003 when the last count was made, but the number has supposedly risen to around 1,000 since then.

The municipality provides special care for these people during the winter months with various services. There are night shelters, hygiene centres and dormitories where the homeless can spend the night under the condition that they have not consumed alcohol.

The overall capacity ranges from 250 standard places to 350 places in case of extreme emergency and the municipality believes it to be sufficient, said Chudinová.

The first dormitory for people in need, Mea Culpa, was opened by the municipal government of Bratislava in 2004 in Bratislava-Vrakuňa. It is paid for entirely from the city budget. Since 2006 it has been functioning year-round with a capacity of 36 places, according to Chudinová.

“Every year we improve and add something to the dormitory; it is of a decent standard,” she added.

One night in Mea Culpa is free and people only pay about €1 (SK30) for dinner and breakfast. The help is available to anyone who fulfils the conditions and wants to spend a night in the shelter.

“If the shelter is full or the person has consumed alcohol, we recommend that they go to the lower-standard Depaul shelter,” Chudinová said.

Depaul Slovensko is an NGO that opened a shelter in December 2006 in a building near the Bratislava airport rented from the municipality.

Homeless can go there for food, to use bathrooms, to get clothes, sheets, blankets and for a place to sleep.

The facility is on a lower level which means that clients can go there to spend the night even if they have been drinking alcohol.

Alcohol consumption is banned in the shelter. According to Chudinová, the average number of people in this shelter ranges from 70 to 170 each night. However, in case of emergency the shelter is able to accommodate up to 200 people, a social worker from Depaul, Mária Benkovičová, told ČTK.

The day centre has a capacity of 25 places that are permanently occupied and there the homeless can also receive social and health care services.

The municipality of Bratislava has been cooperating with several NGOs by either renting buildings for a symbolic sum of money or by paying for utilities.

The estimated number of homeless in the city of Košice is about 400 people and Lucia Mihoková, spokeswoman for the Košice municipal government, said that shelters in the city can accommodate about 300 of them. The municipality is convinced that these capacities, as well as the financial resources allocated for care for the homeless, are sufficient.

A day before Christmas the city opened a temporary shelter on Alejová Street as has been the tradition for several years now. The shelter has a capacity of 100 places and is open only at night from 18:00 until 8:00. Clients can also buy soup in the shelter for just a couple of euro cents. The building was provided by the municipality and the facility is run by the NGO Oáza – nádej pre nový život (Oasis – Hope for New Life).

Mihoková said the shelter should be open until the end of March.

The Archdiocese Charity in Košice takes care of a large part of the homeless, mainly in its shelter they established nine years ago as the first one in Košice.

They built another shelter in 2001 on land belonging to the municipality. The city government has also contributed to furnishing the shelter with financial resources.

The Oáza NGO also runs a shelter in a former administration building in Bernátovce that they are renting from the municipality. It is a daily care shelter meaning that homeless can spend not only nights there but also days. It accommodates around 40 people.

“In this shelter we provide comprehensive care for the homeless during the entire day, unlike some other shelters where the homeless can only stay at night and then during the day they face unfavourable weather that often leads to over-consumption of alcohol to warm up,” said Peter Gombita, the director of the NGO.

Alcohol consumption is mentioned by social workers as one of the main problems of homeless people living in the streets.