2008 racks up some controversial laws

2008 was a fertile year for legislation, some of which led to fiery debates both in parliament and among lawyers. The most controversial acts, according to experts, were the new Press Code, a package of laws to speed up highway construction, and legislation to protect the suppliers of large commercial chains. 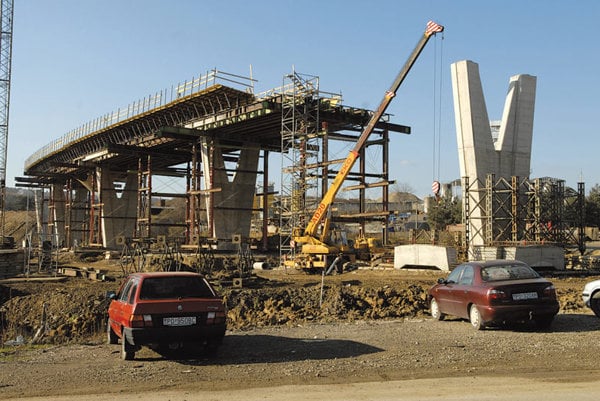 2008 was a fertile year for legislation, some of which led to fiery debates both in parliament and among lawyers. The most controversial acts, according to experts, were the new Press Code, a package of laws to speed up highway construction, and legislation to protect the suppliers of large commercial chains.

One new law even attracted the attention of the European Commission, which called on the country to withdraw the Postal Service Act which expanded the monopoly of the state-run postal operator.

The impact of these and other measures has been strongly debated among professionals and some have alarmed the business community.

In November 2008, for example, the German-Slovak Chamber of Commerce and Industry raised a red flag over legislation that resets the rules that energy companies must observe before they can change their prices. The legislation took away the right of firms’ boards to decide on price-change proposals submitted to the national network regulator, and gave it to those companies’ shareholders. The chamber warned that the legislation could lead to Slovakia losing its high ranking as an attractive investment destination.

For Ondřej Majer, an attorney at Peterka & Partners Law Offices, one of the most controversial legislative changes of 2008 was the act on extraordinary measures to speed up highway construction in Slovakia.

“This legislation allows construction on private land plots before expropriation proceedings are duly terminated and, consequently, irrespective of their result,” Majer told The Slovak Spectator. “Furthermore, under the latest amendment, owners who do not accept the buy-out conditions proposed by the state and thus exercise their statutory right to the proper expropriation proceedings are in fact sanctioned due to the lower buy-out prices which this legislation stipulates.”

The law came into effect in early February 2008, giving the government broad powers to expropriate land needed to complete a cross-country highway which Prime Minister Robert Fico promised to provide to the nation by 2010. Instead of requiring the state to settle all the ownership rights to the land before receiving a construction licence, the new law requires only that the state has settled the rights by the time the construction is finished and approved.

The Transportation Ministry said that the legislation was needed to prevent “a billion” investments from being left in the lurch due to haggling over compensation. But critics contend that the law violates the constitutional right to property.

Nonetheless, the ruling coalition amended it in November 2008 to extend the list of highways and dual carriageways categorised as forming the national-level transport infrastructure. This gave the state the power to begin construction on land without prior agreement from its owner.

According to Majer, another problematic regulation is the new law on inadequate conditions in commercial relations. This act is intended to protect the suppliers of large commercial retail chains against certain commercial conditions and practices generally regarded as unfair, Majer explained.

“Unfortunately, its application in practice will be extremely difficult due to the improper, ambiguous and vague formulation of this legislation,” Majer said. “Perhaps we may expect more unintended than originally intended effects from this legislation.”

The law, which came into effect this month, applies to the sale of products or services to end-consumers at prices lower than their production cost or the purchase price for which the goods were supplied to the retailer.

The law prohibits this practice in principle, though prices may still be trimmed on the basis of a specific agreement between the supplier and the retailer. The bill also limits the fees that retail chains can charge for stocking a product, its placement in a specific position in stores, or for other marketing costs.

His criticism applies to the latest amendment to the Commercial Code, which changes the proportion of powers between boards of directors and general meetings of joint stock companies – for the sole reason that this gives the state a more favourable position in relation to one particular energy corporation in which it is a shareholder, said Majer.

Tomáš Rybár, partner at Čechová & Partners Law Office also views this amendment, affecting price proposals as among the most controversial measures passed in 2008.

The amendment requires that proposed new prices for network industries, for example those supplying gas and electricity, are made only based on the approval of a general meeting of the shareholders of the respective company, Rybár told The Slovak Spectator.

“The law was adopted because of the government’s disagreement with price increases proposed by the main gas supplier, in which the state holds a 51 percent share but carries no managerial control,” Rybár said. “This constitutes a severe interference with the entrepreneurial freedom and decision-making of companies.”

First of all, those shareholders with managerial control paid a premium for their shares at the time of privatisation, and are now being deprived of it without compensation, said Rybár. Their investment is therefore significantly damaged, he added.

“Secondly, the state is turning the whole system of price regulation upside down,” said Rybár. “Instead of regulating the manner by which price increases are justified and approved upon submission of a proposal, it just prohibits enterprises from submitting the respective proposal. Thereby it implicitly admits that such a proposal would be in fact justified and presumably approved under the present economic conditions and related rules.”

According to Rybár, it is very abnormal in a market economy to require a private enterprise to implement the government’s social policies and to deprive a company of its legitimate right to make adequate profits.

Rybár also noted that the law was adopted in a procedure which lasted just a few days, avoiding the debate and discussion which is necessary and expected in a democracy.

“This sends a negative signal about the predictability of the legal regulation of business, and legal certainty for entrepreneurs,” Rybár said.

However, for Rybár the most controversial law adopted in 2008 remains the amendment to Slovakia's postal legislation.

“It was adopted with the aim of strengthening the monopoly of the incumbent operator and to basically put the operators of hybrid mail out of business for items below 50 grams,” said Rybár. “All this happened despite the fact that previously such services had been liberalised and the market regulator issued a number of decisions confirming that fact.”

Hybrid mail is generated when customers transmit content electronically to a postal operator which then prints and envelopes items, and delivers them to the addressees.

This area of the postal services market had been open to competition in Slovakia for several years until February 2008, when the Fico government changed the law to grant Slovenská Pošta, the state-owned operator, the exclusive right to deliver such mail.

According to Rybár, the amendment was in gross violation of the competition rules enshrined in the Treaty Establishing the European Community (also called EC Treaty) as well as the Postal Directive, as re-monopolisation of an already liberalised field of activities is prohibited and any reservation of postal activities to a monopoly needs to be clearly justified by economic and financial reasons. Such reasons were not demonstrated.

This breach was confirmed by a decision of the European Commission of October 7, 2008, which found the amendment to be illegal and ordered the Slovak Republic to reinstate the previous status, said Rybár. At the same time and with immediate effect, it allowed the hybrid mail operators to provide their services again, he added.

However, Slovakia has not taken the required steps and further infringement proceedings had to be opened by the Commission on December 17, 2008, said Rybár, whose firm represented one of the alternative postal operators in the dispute.

Rybár also listed the decrees of the Ministry of Labour pertaining to the extension of applicability of collective agreements as controversial and significantly interfering with the employment policies of a number of employers.

“It obliges [employers] to follow agreements concluded by industry associations of which they are not members and the text of which they did not influence,” Rybár said. “Such agreements contain mainly a set of additional benefits agreed between trade unions and employers grouped in respective industry associations. These benefits are on top of those required by law.”

The decrees in fact extend employee benefits to enterprises which have not negotiated these with the local trade unions and which may not be justified under specific economic conditions, Rybár said.

“This is a legal instrument which affects the business environment negatively and through which the state asks employers to increase employee benefits although it did not use the opportunity to require such benefits through laws, which it could adopt,” Rybár said.

Majer also added to the list of controversial legislation the revision to the law on social security, which reopens the second pillar of the pension savings scheme, the new Press Code and the amendment to the Criminal Code stipulating severe sanctions for increases in regulated prices in connection with the introduction of the euro.

As for the effects some of these controversial laws might have on society, professionals agree that they might result in uncertainty for both foreign investors and domestic businesses. These impacts have been intensively discussed in legal circles.

For example, the legislation on inadequate conditions in commercial relations may result in reduced legal certainty for businesses, said Majer.

“The potential effect on the market, on prices for final consumers in particular, is unclear. However, it is certain that this legislation will not result in the reduction of retail prices,” Majer said.

According to Rybár, the revised postal services act had a negative impact on the legal certainty of entrepreneurs concerning their investments and the stability of the business environment.

“Alternative postal operators have made investments into an area which had been open to competition and suddenly the rules of the game were changed,” Rybár said.