The euro... and a world record

MUSICAL shows and fireworks have traditionally been the main attractions of Slovak New Year’s celebrations but this year the tradition was enhanced by an exceptional event: the welcome to euro and the farewell to the Slovak crown. 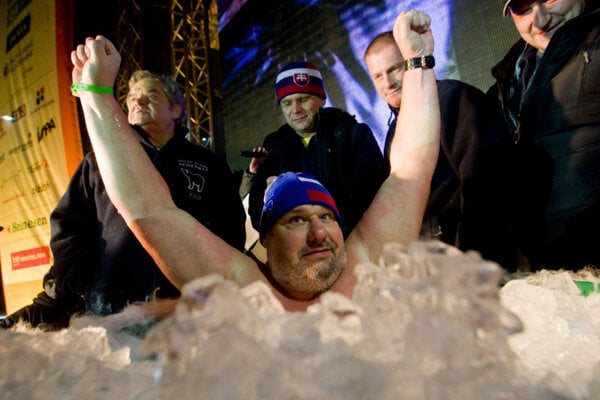 MUSICAL shows and fireworks have traditionally been the main attractions of Slovak New Year’s celebrations but this year the tradition was enhanced by an exceptional event: the welcome to euro and the farewell to the Slovak crown.


More than 100,000 people gathered in Bratislava’s Old Town to ring out the New Year and ring in the new currency. The Sme daily reported that about 10,000 celebrants were foreign tourists, mainly from Italy, France, Britain and German-speaking countries. About 30 foreign media crews were also on hand to mark Slovakia’s transition to the euro.


The culmination of the night’s celebration was an impressive display of fireworks dominated by pyrotechnics in blue and gold, the colours of the European union.


This year’s presentation was prepared by an expert team who laboured until 17:00 in the harbour of Vlčie Hrdlo preparing the show. At 22:00, a ship carrying pyrotechnic cargo set off for the Petržalka bank of the Danube River, where it waited until midnight, Sme wrote. The fireworks show, lasting for ten minutes, was set off from the middle of the river and was deemed a great success. This is in great contrast to the shows of the past two years when the fireworks virtually disappeared in the mist and fog.

A somewhat more esoteric attraction of Bratislava's New Year’s celebration was an attempt by Tibor Birčák of Dolná Seč to break the world buried in ice record.

Birčák made his attempt on the stage at the Main Square where he was interred in a barrel of ice with only his head protruding.

The idea (and don’t try this at home) was to remain submerged in ice at a temperature of approximately minus 18 degrees for at least an hour. While thousands of ice burial fans cheered him on, either in the square or on big screen TV Birčák made his run at immortality.

Barrelside he was surrounded by members of Ľadové Medvede (The Polar Bears). His colleagues fed him energy drinks and monitored his temperature which they would not allow to drop more than four degrees, as such a drop might cause his heart to stop.

Happily, all went swimmingly. Birčák left the barrel after a little over one hour and 15 minutes thus smashing the former record of the Dutchman Wim Hof by over two minutes. Afterwards, Birčák announced that he felt “excellent” the whole time.

In Slovakia’s second largest city Košice, about 3,000 people gathered on Main Street, near the Immaculata statuary to welcome the New Year and the introduction of the euro.

Along with a fireworks display, the coming of the euro was marked by the release of dozens of balloons at just after midnight symbolizing a new era in the life of Slovakia and the city of Košice.