Kubiš stays on for crisis

JÁN Kubiš, the foreign affairs minister, is to stay in his post despite Prime Minister Robert Fico agreeing late last year that he would leave to take up a senior job at the United Nations. Kubiš' departure has been postponed at Fico's request, because of the protracted natural gas crisis. 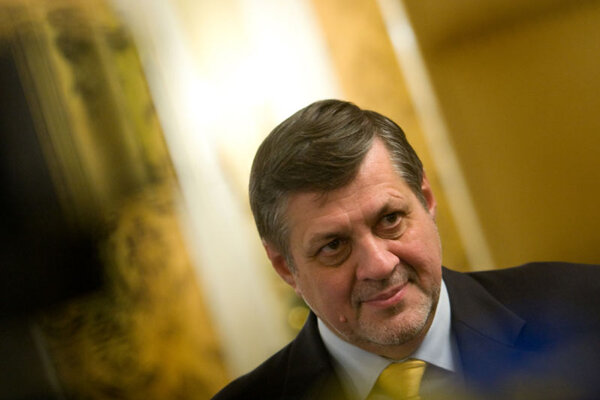 JÁN Kubiš, the foreign affairs minister, is to stay in his post despite Prime Minister Robert Fico agreeing late last year that he would leave to take up a senior job at the United Nations. Kubiš' departure has been postponed at Fico's request, because of the protracted natural gas crisis.

Slovakia is among those EU countries most dependent on Russian natural gas. Gas imports, which under normal circumstances come via Ukrainian pipelines, were completely stopped on the night of January 6 as a result of the escalating dispute between Russia and Ukraine.

“We are making all possible diplomatic and foreign policy initiatives,” Hospodárske Noviny quoted Fico as saying.

Kubiš will, nevertheless, still leave his post in the near future, Fico said.

“He asked to be released, and he will be released, as he plans to leave to work in an international organisation,” Fico told journalists on January 12.

“But some continuity at this moment would be better,” Fico added.

Kubiš revealed that he had discussed the possibility of remaining with Fico and President Ivan Gašparovič shortly after the gas stoppage began: “When it became evident that we were in state of emergency because of the lack of gas and when the question of possible re-commissioning of the nuclear block in Jaslovské Bohunice arose”, Kubiš told journalists at a press conference on January 13.

“These are all issues which require a diplomatic effort.”

Russia and Ukraine, by passing their conflict to other countries, are damaging their images in Slovakia and in neighbouring EU member states, Kubiš said.

Kubiš said he intended to stay in his ministerial chair until the end of January, “until the situation is perfectly clear and all necessary diplomatic steps have been taken.”

Kubiš noted that his delayed departure would be better also for both Russian and European partners, “so that we don’t have to start negotiations again from the very beginning about all the crucial questions concerning us about the crisis,” Kubiš said.

On January 14, the day after his press conference, Kubiš, along with Fico and economy minister Ľubomír Jahnátek, took part in negotiations with Ukrainian Prime Minister Yulia Tymoshenko and Russian Prime Minister Vladimir Putin. A meeting with the European Commission is also planned because of the possibility of restarting the reactor in the nuclear power plant Jaslovské Bohunice that was shutdown on December 31.

Kubiš is leaving to become executive secretary of the European Economic Commission of the United Nations (UNECE) in Geneva, where he will replace Marek Belko of Poland. The UN General Secretary Ban Ki-moon announced Kubiš’s nomination

Kubiš, as a nominee of Smer, became the foreign affairs minister after the June 2006 elections. From 1999 to 2005, he was the General Secretary of the Organisation for Security and Co-operation in Europe (OSCE). Later, he worked as a special representative of the EU to Central Asia.

It has not yet been formally announced who will succeed Kubiš. Media speculation has focused on Igor Slobodník, a long-time diplomat. Currently, Slobodník works as the head of the political section at the foreign ministry. He led the Slovak mission to NATO headquarters in Brussels between 2003 and 2008.

His father, Dušan Slobodník, was a senior member of former prime minister Vladimír Mečiar’s party, the Movement for a Democratic Slovakia (HZDS), who served as culture minister under Mečiar from 1992 to 1994. He served as a HZDS MP until his death in 2001.