Presidential election to be held in March

COMPARED to the USA, the election campaign is a little shorter and the candidates’ election budgets slightly lower, but on March 21 Slovaks will get the chance to elect the president of the republic. The date of the election was announced by the speaker of parliament, Pavol Paška, on January 8. 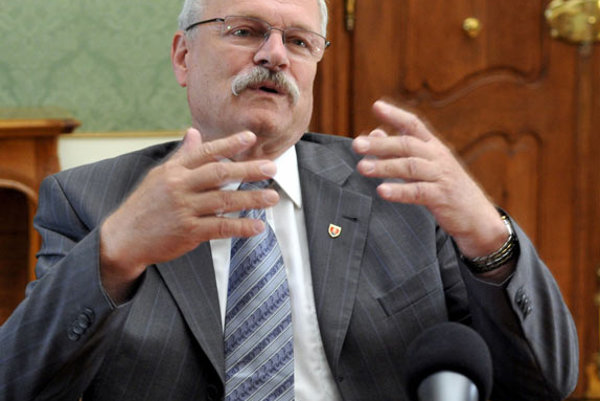 COMPARED to the USA, the election campaign is a little shorter and the candidates’ election budgets slightly lower, but on March 21 Slovaks will get the chance to elect the president of the republic. The date of the election was announced by the speaker of parliament, Pavol Paška, on January 8.

Polls held so far suggest that the two leading candidates for the post are the incumbent, Ivan Gašparovič, who is supported by the ruling coalition parties Smer and the Slovak National Party (SNS), and Iveta Radičová, an MP for the Slovak Democratic and Christian Union (SDKÚ). Radičová is backed by all three parliamentary opposition parties: the SDKÚ, the Christian Democratic Movement (KDH), and the Hungarian Coalition Party (SMK).

According to the most recent poll, by the MVK agency, Gašparovič would have received the votes of 55 percent of those respondents who backed a candidate, and Radičová 32.6 percent.

František Mikloško, the candidate of the Conservative Democrats of Slovakia (KDS), which was formed last year after four MPs broke away from the opposition KDH, was named by 4.6 percent.

In fourth place was the head of the non-parliamentary party Free Forum (SF), Zuzana Martináková, who in the December poll got the support of 4.5 percent of respondents. In fifth place, with 1.7 percent, was Milan Melník, the candidate of the third ruling coalition party, the Movement for a Democratic Slovakia (HZDS). Other candidates, polling one percent or less each were Ivan Šimko, Milan Sidor, Július Kubík, and Dagmar Bollová.

But more than one fifth of all respondents (22 percent) said they were undecided or would not take part in the election.

The poll was conducted between December 12 and 18 on a representative sample of 1,015 people who were asked whom they would vote for had all the above candidates been running for the position of head of state.

Late last year, Paška told the Sme daily that he would announce the election for February or March. At the time his suggestion that the election might be held as early as February was criticised by candidates including Radičová and Martináková. The HZDS leader, Vladimír Mečiar, also expressed disagreement and even threatened a “conflict in the coalition”.

They felt that an early date would favour the incumbent by not giving other candidates enough time to raise their public profiles.

“I hope that Mr. Paška will not make such a grave political mistake to prefer one candidate, i.e. the candidate of Smer, Mr. Gašparovič, to the disadvantage of others,” Mečiar said on the Markíza TV channel on November 30.

HZDS has not joined the other two coalition parties in supporting Gašparovič - who previously led the non-parliamentary Movement for Democracy (HZD) – and instead selected its own candidate, Milan Melník.

The reason for this may be a personal dispute between Mečiar and Gašparovič. The president was a founding member of the HZDS and one of its leading members for 10 years. However, he left the party and set up the HZD in 2002 after falling out with Mečiar. Gašparovič defeated Mečiar in the second round of the last presidential election in 2004.

Mečiar has said that an earlier date for the 2009 election would harm the chances of Melník, the HZDS candidate.

Paška rejected the notion that he chose the late-March date in order to avert the possibility of conflict within the ruling coalition. “I took into consideration nothing but my own competency and I enjoy this moment,” Paška was quoted as saying by Sme.

According to the Slovak constitution, candidates for the president must be proposed by at least 15 members of parliament or by a petition signed by at least 15,000 eligible voters.

Announcing the date of election, Paška stressed to the media that petition sheets in support of individual candidates must be filled in legibly and cannot contain abbreviated forms of towns otherwise they would not be accepted.

After the date of the election is published, candidates have 21 days in which to hand in their candidacy proposals to the speaker. The new head of state will take the oath in parliament on June 15.

The March election will be the third in which Slovaks have directly elected the president. Slovakia’s first president after independence in 1993, Michal Kováč, was elected by parliament.

Although President Gašparovič has still not officially announced his candidacy, he has indirectly confirmed he will run for re-election. “It is generally known that my decision will be unambiguous and positive,” Gašparovič was quoted as saying by the Pravda daily on January 9.

Gašparovič’s spokesman, Marek Trubač, told The Slovak Spectator that the president would decide and announce his decision about whether to become an official candidate within the deadline stipulated by law. A civic initiative, Our President, says it has already collected enough voters’ signatures to qualify him as a candidate.

Melník, the HZDS candidate, reacted positively to the announcement of the date of the election.“As a presidential candidate, I believe and hope that in the next period, until the day of election of the head of state, we will fight a dignified battle for the support of voters,” he told the TASR newswire.

Radičová also welcomed the date. Thanks to this information, all the attention will concentrate on the candidates, on their agendas, visions, issues. “March 21 is a really symbolic day,” Radičová told The Slovak Spectator.

“It is a change of the season. Maybe it could also signal some other kinds of changes too.”

The head of the MVK agency, sociologist Pavel Haulík, told The Slovak Spectator that for almost a year and a half, polls have delivered a single answer to the question of who has the best chance of becoming Slovak president for the next term: Gašparovič. “His lead in the polls is respectable,” Haulík said.

“Of course, election turnout could change everything, as it is hard to estimate how many people will really come to the polls.”

Haulík added that according to surveys, fewer and fewer voters plan to vote. “Naturally, a lot will depend on how the campaign turns out, especially in the final phase,” Haulík explained.

So far, Haulík estimates voter participation in the presidential election will be about 30-40 percent.

He commented that Radičová, who is the second most successful candidate according to successive polls, would be better off if she managed to win votes among ruling coalition supporters, who have long since been a majority among all voters and who currently support Gašparovič. “If Radičová wanted to gain a better result, she would have to overcome this division,” Haulík added.

“An inevitable, although not sufficient pre-condition for this would be to distance herself a little from the policies of [SDKÚ leader] Mikuláš Dzurinda in his previous term [as prime minister].”

However, Radičová has refused to do this.

“I am deeply convinced that this dividing line over crucial issues and problems which affect Slovak citizens’ lives simply does not exist,” Radičová told The Slovak Spectator.

“Whether he is a supporter of the ruling Smer party, or of the opposition, an unemployed person in Gemer has the same problems regardless of what are his or her electoral preferences.”

Moreover, Radičová refused to criticise the policies of Dzurinda. Her decision to become a member of the SDKÚ was influenced by the party’s values and principles, which have always been close to her, she said. She added that she would not change them.

She considers the idea of distancing herself from the SDKÚ only to get more support as “reversing her coat”. “I will not reverse my coat”, she stressed.

However, Haulík said that unforeseen events could always change the popularity of the candidates. “This would be more the result of unpredictable circumstances than the result of a sophisticated electoral campaign”, he stressed.