The crown slips gently out of use

JANUARY 16, 2009, was when Slovaks finally said good bye to the notes and coins they have used for the past 16 years. From now on it’s euros only instead. 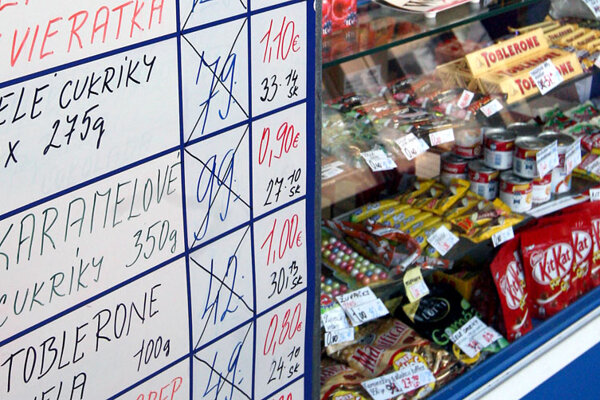 JANUARY 16, 2009, was when Slovaks finally said good bye to the notes and coins they have used for the past 16 years. From now on it’s euros only instead.

Since January 16, when the period of dual circulation ended, customers have no longer been allowed to choose whether they use either euros or Slovak crowns – or a mix of both - to pay for goods and services in Slovakia, and must now take any leftover cash in crowns to a local bank if they want to have it exchanged for euros.

The European Commission, Slovak state officials, bankers and observers have not detected any major hitches with Slovakia’s switchover to the euro, which began on January 1, 2009. While prior to the introduction of the currency, price hikes were among the major concerns, now the country’s prime minister says that Slovakia seems to have tamed the inflation beast.

“Slovakia will be probably the first country where prices and thus inflation will not rise after euro adoption,” Prime Minister Robert Fico said, as quoted by the SITA newswire.

Fico also said that the euro’s introduction has not been abused for unjustified price hikes in Slovakia.

Headline inflation in Slovakia slowed from 4.9 percent in November to 4.4 percent in December 2008 while the average year-on-year inflation rate for 2008 stood at 4.6 percent, the Slovak Statistics Office reported on January 13.

Nevertheless, during the first two weeks of the euro in Slovakia price watchdogs kept a close watch on prices to see that changeover rules were being respected. The Slovak government has created several tools to detect and penalise those whom the Fico cabinet calls euro-switch abusers.


What did the watchdogs find?

The Slovak Trade Inspectorate (SOI) monitored the market during the first two weeks of euro circulation in the course of its normal business. However, the SOI has also been employing temporary inspectors to monitor the effect of the switch.

Shortcomings were detected in 156 cases of the total of 1,536 checks that the SOI conducted between January 1 and January 11, SOI spokeswoman Danuša Krkošová told The Slovak Spectator.

“It is a quite favourable situation, since no shortcomings have been found within the retail chains,” Krkošová said.

During the period of dual circulation lasting from January 1 to January 16, 2009, SOI inspections focused on correct display of the conversion rate, and checked that prices were being displayed in both currencies, the correctness of the conversion of prices from crowns to euro and the rounding of prices.

The inspectorate also checked whether businesses were accepting both Slovak crowns and euros, whether shops were giving customers the correct change and also how prices were affected, said Krkošová.

Businesses giving change in Slovak crowns during dual circulation, without the approval of the customer, was the most frequently detected violation; the SOI recorded it 31 times, according to an official SOI document provided to The Slovak Spectator.

Businesses miscalculated the change or the payment price to the disadvantage of the customer 34 times, the SOI found, while businesses failed to display the correct price in Slovak crown – or did not display it at all - 11 times.

Another watchdog, the Association of Consumers of Slovakia (ZSS) did not detect any major violations either.

“The transition to the euro has been successful after all,” the director of the ZSS, Miroslav Tulák, said. “No unpredictable or serious problems have emerged. I think this is how it will continue.”

The association conducts a regular monitoring of prices twice a month on selected food and industrial products and services.

“We are also checking on complaints that we receive from citizens from all over Slovakia pertaining to suspicions of unjustified price hikes,” Tulák told The Slovak Spectator.

Tulák confirmed that the most frequent complaints have been about prices.

“First of all local public transportation prices in the Košice, Prešov and Poprad regions were questioned,” Tulák said, adding that these complains are still under investigation.

Slovak consumers also reported cases of businesses refusing to accept Slovak crowns as payment during the period of dual circulation (when they were in fact obliged to take both crowns and euros).

Tulák went on to list some peculiar cases such as a complaint about a local fishing association which reportedly refused to accept Slovak crowns during the dual-circulation period, or a local skating rink which rounded up its ticket prices for children and for the entry of non-skating parents to one euro, despite them previously having been different in Slovak crowns.

Consumers also complained about higher prices charged by coffee vending machines, or about an advertising flyer for a mobile operator which did not display the prices in Slovak crowns but only in euros, he added.

The problem affecting automatic coffee vendors in particular seems to have exercised the consumer association. Tulák went so far as to suggest a remedy: that if the machines cannot be adjusted to take the small one or two euro cent coins in order to allow the previous price of the coffee in Slovak crowns to be matched exactly then the machine should dispense a bigger portion of coffee, if the price has been rounded up.

The country’s price council has also reviewed some of these complaints, Tulák said.

The price council is an advisory body to the cabinet which, according to state officials, was established to enforce popular trust in the euro adoption process while respecting the nature of the market.

Slovakia also has a so-called black list of businesses which, according to price watchdogs, have tried to impose unjustified price rises during the run-up to the adoption of the euro. The ZSS has added restaurants, tourism-related businesses and even sports venues to the list of euro-switch abusers.

The Economy Ministry has given Sk3 million (€99,581.76)-worth of assistance to the ZSS to monitor the prices of selected food and industrial products and services.