THE TIMES when advertising in Slovakia lagged far behind European and American standards are gone. Advertising agencies claim that recent years have brought international recognition, calling 2008 the most successful year in the history of Slovak advertising. 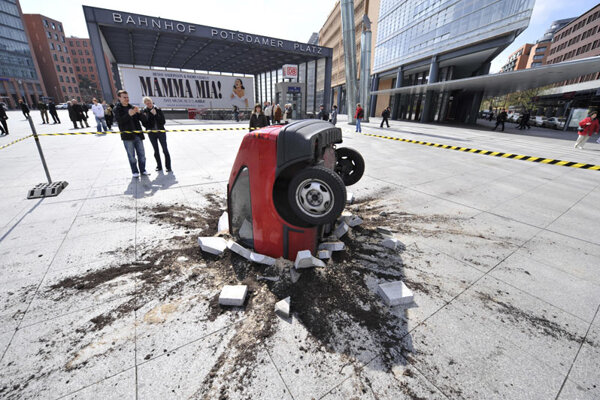 Slovak advertising agencies are recognised internationally, but you will not see a masterpiece like this on the streets of Slovak cities. (Source: TASR)
Font size:A-|A+  Comments disabled

THE TIMES when advertising in Slovakia lagged far behind European and American standards are gone. Advertising agencies claim that recent years have brought international recognition, calling 2008 the most successful year in the history of Slovak advertising.

When describing their international success, they refer to numerous international awards recognising the works of Slovak advertising agencies at festivals such as the Golden Drum Portoroz, the New York Festival, Midas New York, the Golden Hammer Riga, London International Advertising Awards, Epica, Eurobest, Global Awards New York and others. The agencies also value their success in national forums, especially in the Zlatý Klinec (Golden Nail) awards and the Effie awards, both sponsored by the Club of Advertising Agencies in Slovakia (KRAS).

Zlatý Klinec awards, announced for the 14th time last year, put a focus on creativity in advertising and is the only competition of its kind in Slovakia. The works of the advertising agencies compete in the categories of Print and Poster, TV and Cinema, Radio, Interactive and Online, Techniques, New Media and Campaigns. There are also two new categories, the Talent of the Year aimed at young creative workers, students and amateurs and the Artistic Act of the Year.

Effie Slovakia is a competition judging the effectiveness of marketing communications and takes into account far more than just creativity, including other aspects like the communication strategy, planning, account management and the like. Effie is awarded in six categories depending on the type of advertised product: short-term consumer products, long-term consumer products, financial services, non-financial services, telecommunication services and philanthropic marketing.

Effie is a licensed competition and as such it has a value for the clients due to its international recognition, Juraj Vaculík, the president of KRAS and the owner of Vaculík Advertising, told The Slovak Spectator.

“The advantage of an award like Effie is the fact that it works with not only the subjective factor of creativity but also with the analysis of hard marketing data, such as the sales results,” he said.

KRAS is planning some significant organisational changes in both the Zlatý Klinec and Effie award competitions. According to Ivan Hulík from MUW Saatchi & Saatchi agency, a member of KRAS, the evolving standards in advertising put pressure on the competitions as well.

The upcoming changes should make the competitions more professional, dynamic, transparent and simple. The content and form of the competitions should also become more attractive, so that the general public takes more interest as well, Hulík said.

KRAS will announce the organisational changes in Zlatý Klinec in the near future.

“As for Effie, the changes will touch foremost on the way the works are assessed, the selection of the jury and a significant emphasis will be put on the quality and accuracy of data in the application forms, since the success in Effie depends heavily on them,” Hulík told The Slovak Spectator.

For MUW Saatchi & Saatchi, the awards are important because they strengthen its image and make the agency more visible on the market. In this respect, the agency makes no distinction between Zlatý Klinec and Effie, since both serve as a form of appreciation of the agency’s work, Hulík said.

The difference is, however, important for Istropolitana D’Arcy, which received three Effie awards last year (two silvers and one bronze). This earned the agency the title of the most successful agency at the Effie 2008 competition.

“Creativity is a factor in every marketing campaign, but this creativity can only be used within a sophisticated strategy,” said František Toman, the managing director of Istropolitana.

The creativity is delivered via media, but the selection of the media has its own strategy and often also its own creativity. Hence, creativity is only a part of an advertising campaign, Toman said.

“Since Zlatý Klinec evaluates only creativity, often in just a part of the campaign, and Effie evaluates and compares all the parts of the campaign in their complexity, while putting the biggest focus on the actual communication and the sales results, the more important award from our point of view is the Effie,” he told The Slovak Spectator.

According to Vaculík, however, one award does not, on its own, create a reputation for the winner.

“It is always a matter of opinion, whether for instance the Slovak Effie has a greater value than gold from the creativity competitions in New York, Portoroz or Cannes,” he said.

These major awards are not as rare as they might seem. For instance, the TV commercial named Kamionisti (Truck Drivers) by MWU Saatchi & Saatchi for Kooperativa insurance company received five golds, two silvers and two shortlisted positions at international competitions last year.

“Maybe at first glance, there are not so many [successes], but that’s definitely determined by the size of our market,” Toman from Istropolitana D’Arcy told The Slovak Spectator, adding that a calculation of awards received by a country in comparison to the expenses of advertising in that
country would probably surprise many. Slovakia would not be in a low position, he said.

The most significant restriction for the Slovak advertising agencies is the fact that the marketing departments of the global clients are not located here and there are no opportunities to handle worldwide campaigns. Despite that, the agencies call 2008 a resounding success.

“The best thing about it is that it was not just works by one agency, as it used to be in the past, but that several Slovak advertisements, entered by different agencies, took part in the success,” Hulik said.

All in all, the awards, for both effectiveness and creativity, are beneficial for the competition between agencies and they serve as a sort of ranking. Their clients, however, are more interested in their own actual marketing and sales results, said Vaculík.

“As long as they are happy with those results, they will not stop their cooperation with an agency only because it does not score at the competitions,” he told The Slovak Spectator.

“When this primary role of marketing works to the client’s highest satisfaction, the awards then serve as a pleasant confirmation of the agency’s ability to produce exceptional quality. And that surely adds to an improvement in its market position.”