THE EDITORS of big daily newspapers in Slovakia are expecting the global economic crisis to affect the print media here. The print media must also manage the rise in the number of internet news portal readers. And the Slovak media, especially the print media, has faced repeated attacks by Prime Minister Robert Fico for some time. 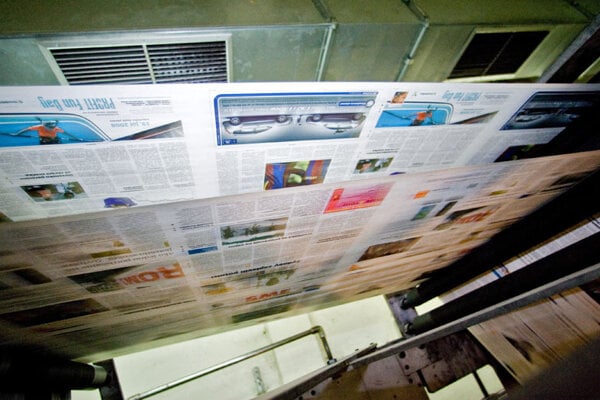 What is the future for the print media? (Source: SME - PAVOL FUNTÁl)
Font size:A-|A+  Comments disabled

THE EDITORS of big daily newspapers in Slovakia are expecting the global economic crisis to affect the print media here. The print media must also manage the rise in the number of internet news portal readers. And the Slovak media, especially the print media, has faced repeated attacks by Prime Minister Robert Fico for some time.

Editors admit that they have started feeling the impact of lower advertising revenues caused by the global economic crisis, and a decrease in newspapers sales due to a boom in the number of people who get their news via the internet. In response, editors are strengthening their websites.

Matúš Kostolný, editor-in-chief of the Sme daily, said that revenue from advertising accounts for an important part of the media’s income. “And that is why measures to help the daily to survive are inevitable,” Kostolný said. But they will first try to solve this difficult situation by means other than layoffs.

“The global economic crisis and the crisis within worldwide print media will also have an impact in Slovakia. Sme will have to save resources, too.”

The editor-in-chief of the economic daily Hospodárske Noviny (HN), Peter Vavro, told The Slovak Spectator that in its print section they have already limited the extent of a new analytical department. But they also depend on this department.

“We count on this department as one of the factors that will help us strengthen our HN journalism with an economic accent – series, issues, and big news stories about money and people in Slovak business and their initiatives,” Vavro said.

He added that they are also focused on further development of the HN website, Hnonline.sk.

“We improved its visual factor, and through new people, we intend also to strengthen its relevance and competitiveness.”

In addition, HN is planning to launch a new specialised financial portal in the spring, Finweb.sk, and other portals oriented towards education and lifestyle should be added in summer.

“It will hit Új Szó,” he told The Slovak Spectator.

The editorial team of Új Szó plans to save money but publishing the daily and the work supporting it needs restructuring in a sensible way.

“Our next steps will depend on what the first three months of 2009 bring,” Molnár added.

Új Szó noticed a reduction in advertising last year. “This year could be a bit better, as there will be at least three elections, which means three electoral campaigns. But we do not expect a significant increase.”

Molnár lays out one possible optimistic scenario for advertising. “Companies will be advertising more due to the euro, and people will read more as they will need more information about the euro and the economic crisis.

“The pessimistic view is that companies will try to save a lot more than last year and people will have less money, and that will bring grave consequences for us.“

The Pravda daily restructured its editorial team when it changed its format last November, according to editor-in-chief Petr Šabata. “So we are not preparing other big changes”, Šabata said for Sme.

“But 2009 will be very hard for us also – as for other dailies and weekly publications.”

The most widely read daily, the Nový Čas tabloid, has no reason to dismiss people due to the economic and financial crisis, editor-in-chief Júlia Kováčová said. “Ringier Slovakia, which includes Nový Čas, has prepared for the upcoming year in another way, by ending two smaller projects with poor prospects,” Kováčová told Sme.

She was referring to the weekly tabloid Nový Čas Ľudia and a weekly for women, Čas Pre Mňa, which ceased publication in October 2008. Both periodicals were deemed to have poor prospects by representatives of Ringier publishing house. Nový Čas Ľudia was published for four years but Čas Pre Mňa was on the newsstands for just a few months.

Kováčová added, in comments to Sme that she thought other periodicals “of competitors’ publishing houses” will be forced to sack people.

The 7Plus Slovak media house, which publishes several periodicals, including the most successful Slovak weekly Plus 7 Dní and the tabloid daily Plus 1 Deň, stopped publishing its tabloid weekly Top last year. It, too, had been published for just a few months.

Journalist Michael Hirschhorn wrote in the January-February 2009 issue of The Atlantic, a monthly US magazine, that the collapse of daily print journalism would mean many things. "It will mean the end of a certain kind of civilized ritual that has defined most of our adult lives,” he wrote about getting and reading a daily newspaper.

“It will also mean the end of a certain kind of quasi-bohemian urban existence for the thousands of smart middle-class writers, journalists, and public intellectuals who have, until now, lived semi-charmed kinds of lives of the mind.

“And it will seriously damage the press’s ability to serve as a bulwark of democracy."

Hirschhorn continued: “Internet purists may maintain that the Web will throw up a new pro-am class of citizen journalists to fill the void, but for now, at least, there’s no online substitute for institutions that can marshal years of well-developed sourcing and reporting experience — not to mention the resources to, say, send journalists leapfrogging between Mumbai and Islamabad to decode the complexities of the India-Pakistan conflict.”

According to Patrik Garaj, from the online server Medialne.sk, Hirschhorn’s words apply also to Slovakia. Moreover, he said that hardly anyone – not just in Slovakia – can imagine the downfall of print media. “But the question is whether the print media are still a real need or rather, to a large extent, just an expression of sentiment,” Garaj added - in an article posted online on January 13.