LAST AUTUMN, Hungarian-Slovak relations were a hot topic in the media and writing about positive relations was rather unfashionable. But as it turned out, a two-week dispute could hardly shatter centuries of common history. 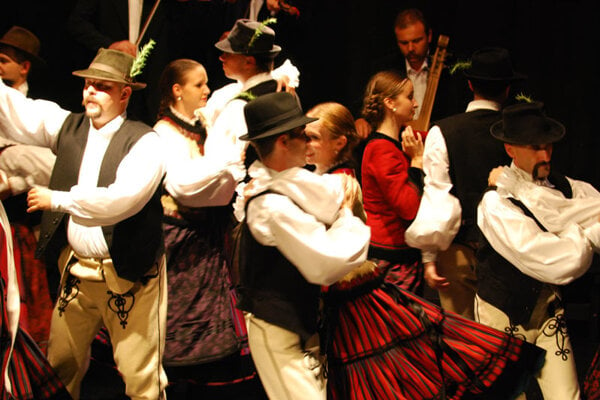 LAST AUTUMN, Hungarian-Slovak relations were a hot topic in the media and writing about positive relations was rather unfashionable. But as it turned out, a two-week dispute could hardly shatter centuries of common history.

Nothing illustrates this better than the cultural life of the communities. On January 19, the Ifjú Szívek (Young Hearts) folklore ensemble will premiere a new show in Bratislava titled Dance, String Instruments, Percussions and Piano. Tickets are selling like hotcakes.

“Ifjú Szívek was founded almost fifty years ago to promote the traditions of the Hungarian minority living in Slovakia,” said Dušan Hégli, artistic director of the ensemble. “However, it would be unreasonable to think that something like a specific ‘culture of Hungarian Slovaks’ exists. The two nationalities have lived here side by side since time immemorial and no modern borders can change that.”

As a result, creating a repertoire of ‘pure Hungarian’ songs or dances from southern Slovakia would be impossible, he further explained.

“A good example is the show we will give in Bratislava and, three days later, in Budapest,” Hégli told The Slovak Spectator. “It is subtitled Homage to Béla Bartók, who was one of the greatest Hungarian composers. He used to visit various villages in southern Slovakia, record traditional local melodies regardless of their origin, and later incorporate them into his works.

In this respect, we follow Bartók’s footsteps and try to offer a complex image of central European, or maybe even Europe-wide folklore.”

When preparing a new performance, Hégli always asks himself how to find a balance between traditions and modernity. In the new show, this is achieved mainly through the selection of the musical numbers but also by means of a projection screen in the background and an original stage design.

“One can never forget that we present folklore here and now, in the 21st century,” he observed. “That is why we try to put traditions into a new light so that people today, those with their eyes always at the second hand of their watches, can still understand their roots.”

Ifjú Szívek has managed to find this universal key and it has already been proven many times not only in Slovakia, but in other countries as well, according to Hégli.

“We have been to the United States, Scandinavia, Australia and many, many other countries with our shows,” he said. “Australia is quickly becoming our second home, as we have been there several times. In February, for example, we will tour Canberra, Newcastle, Wollongong and Sydney.”

As the artistic director remarked, some members of the audience are so fascinated by the local folklore that they even ask him or the dancers to teach them a few Slovak or Hungarian dances.

“Once, in San Francisco, I met a cosmetic surgeon who came all the way from Los Angeles only to learn czardas,” Hégli stated. “One would suppose he had some Hungarian or Slovak roots, but that was not the case. He simply liked the culture and wanted to know it better.”

Yet, Ifjú Szívek has had its greatest success performing in Hungary and, perhaps surprisingly, with Slovak dances.

“If a Hungarian knows Slovak culture, it is most probably because of performances by Ifjú Szívek” said Hégli, adding that music usually bridges what politics might divide.

“Nationalities get to know each other most easily through culture, and for Slovaks and Hungarians, they have much more in common than they have in differences. Folklore does not lie.”