US ambassador with Slovak roots departs

SLOVAKIA’S inclusion in the US Visa Waiver Program, enabling Slovak tourists and business visitors to travel to the United States without a visa, and the official visit of Slovak president Ivan Gašparovič to the US are the two things outgoing US Ambassador Vincent Obsitnik considers the biggest successes of his thirteen months in post. 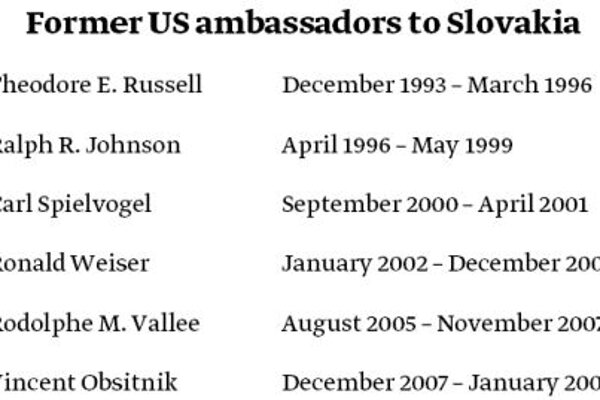 SLOVAKIA’S inclusion in the US Visa Waiver Program, enabling Slovak tourists and business visitors to travel to the United States without a visa, and the official visit of Slovak president Ivan Gašparovič to the US are the two things outgoing US Ambassador Vincent Obsitnik considers the biggest successes of his thirteen months in post.

“It's an honour for me to have been US ambassador to Slovakia,” Obsitnik said at the beginning of a farewell meeting with Slovak journalists. “I think that, along with the Slovak government, we have accomplished much.”

Obsitnik is leaving in line with American tradition: after the election and inauguration of a new president, political nominees including top diplomats offer the new president their resignation. Obsitnik was nominated by ex-president George W. Bush. His successor will be chosen by the government of the new US president, Barack Obama. Obsitnik’s responsibilities at the US Embassy in Bratislava will be taken up temporarily by his current deputy, Keith Eddins.

Obsitnik served as America’s ambassador to Slovakia from December 2007.

He told journalists on January 19 that the name of the new ambassador was not known in Washington, DC, yet, and that he or she would arrive in five or six months at the earliest.

His work was praised by the Slovak Foreign Affairs Ministry, and Slovak Foreign Minister Ján Kubiš awarded Obsitnik a Golden Plaque. Acccording to a statement by the ministry, Obsitnik received the plaque for “an outstanding contribution to the development and strengthening of friendly relations and bilateral co-operation between the Slovak Republic and the US”.

Jake Slegers, the executive director of the American Chamber of Commerce in Slovakia said he appreciated the cooperation during the tenure of Ambassador Obsitnik in Slovakia, which he said had ‘truly intensified’.

“The Ambassador’s personal involvement in issues relevant to the business community was felt in many areas,” Slegers told The Slovak Spectator.

According to Obsitnik, economic co-operation between Slovakia and the USA has been excellent during his term. He stressed that more than 50,000 Slovaks currently work for US companies in Slovakia, with $4 billion in total invested.

Obsitnik said he would like to encourage Slovakia to continue to create a positive business environment, which would encourage new investors – who he described as especially necessary in industry - to keep coming.

The American Chamber of Commerce also welcomed a survey of US companies with a presence in Slovakia which Ambassador Obsitnik initiated. According to Slegers, this confirmed the strong trade and commercial ties between the United States and the Slovak Republic.

Slegers said Obsitnik had always been supportive of the chamber’s activities in the area of Slovak educational reform and business-academic cooperation, including the organisation of its Mentor Network Program, which enables some of Slovakia's top, young university students to interact with the executives of leading companies in Slovakia.

Slegers also mentioned the activities in eastern Slovakia in which the chamber cooperated with the embassy, including a major conference on labour shortages held in Prešov in May 2008.

“It was also very special to have an ambassador with a direct Slovak heritage,” Slegers said. “I feel that this significantly contributed to his success during his time in Slovakia.”

Obsitnik told The Slovak Spectator that he considered the most difficult task during his whole mission the preparation for the NATO summit, which took place at the beginning of April 2008 in Bucharest.

At the summit President Bush won NATO endorsement for his plan to build a missile defence system with bases in Poland and the Czech Republic, despite objections from Russia.

“I personally believe that this is a very important system for Europe to have, to protect Europe against any missile which is aimed at this part of the world or is fired [at it] accidentally,” Obsitnik told The Slovak Spectator.

Slovak Prime Minister Robert Fico has not always agreed with the direction of US foreign policy, but the Slovak government supported this project, and which was significant, remarked Obsitnik.
“I have to say that relations between the US and Slovakia are very good and very strong, despite the fact that we might disagree on a couple of events”, told Obsitnik.

The intergovernmental relationship must be viewed as a whole, not as single issues on which agreement might not be found, Obsitnik stressed. He added that in the last six months there has been no serious disputes.

“The Slovak Government supported the NATO mission in Afghanistan. As a new member state of NATO, Slovakia thus confirmed that it's not a country that just consumes security, but one that can provide it as well,” Obsitnik stated.

Obsitnik considers the war in Afghanistan to be one of the biggest challenges of current international policy, remarking that it is something all the allies must co-operate on, in order to prove that a democratic country can exist in that part of the world.

During his mission, Obsitnik repeatedly expressed support for the fight against corruption and spoke out in favour of the preservation of Slovakia’s Special Court.

Visiting Martin on January 13, for instance, he said that corruption was never a purely domestic issue; its corrosive effects can be felt far beyond the borders where it originates.

“Unfortunately, some recent developments could cast doubt on Slovakia’s adherence to its anti-corruption commitments,” Obsitnik stressed.

He then gave the examples of numerous reports of inflated and non-transparent government tenders, as well as attempts to abolish the Special Court (which deals with high-profile corruption cases) and also the unwillingness of the state or the courts, despite strong legal arguments against its construction, numerous irregularities and compelling allegations of conflicts of interest, to suspend construction of the Pezinok dump.

Last year, residents of Pezinok, a small town in western Slovakia, unsuccessfully protested against a new site to process waste from Bratislava which was built less than half a kilometre from the centre of the town.

“Some of these issues could lead potentially to a loss of EU structural funds and a loss of public and business confidence in Slovakia’s commitment to combating corruption,” Obsitnik stressed in Martin.

George W. Bush leaves office as one of the least popular presidents in history. But according to Obsitnik history will re-assess his term and presidency.

Obsitnik also described his pride in his Slovak ancestry.

“You don’t know where you will go in future if you don’t know where you came from,” he said, explaining why information about his ancestors was so crucial not only for him but for everybody.
Obsitnik plans to return to Slovakia later this year when his aunt, who lives in Košice, celebrates her ninetieth birthday.