THE STATE and quality of democracy in Slovakia deteriorated in the last quarter of 2008. That is the conclusion from the Barometer poll conducted by the non-governmental think tank, the Institute for Public Affairs (IVO). Moreover, it said, this period was marked by growing party cronyism and alarming tendencies to limit individual and human rights. 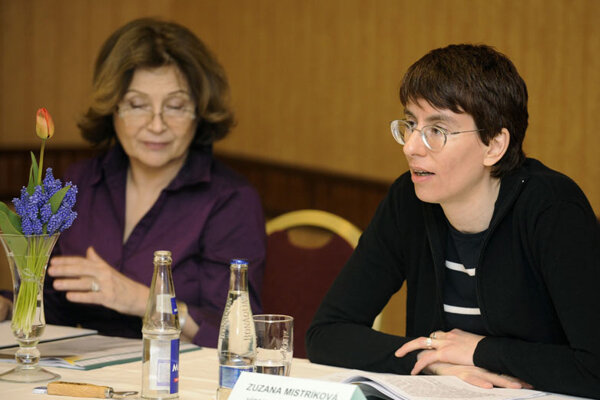 THE STATE and quality of democracy in Slovakia deteriorated in the last quarter of 2008. That is the conclusion from the Barometer poll conducted by the non-governmental think tank, the Institute for Public Affairs (IVO). Moreover, it said, this period was marked by growing party cronyism and alarming tendencies to limit individual and human rights.

The annual average evaluation of the quality of democracy in Slovakia for 2008 was 2.9, according to the IVO Barometer. The rating system goes from 1.00 to 5.00, with a score of 1.00 being the optimal state of democracy, based on the standards of the European Union and the Council of Europe in the areas of institutional stability, political democracy, human rights and freedom.

According to Grigorij Mesežnikov, head of IVO, their experts have not yet discovered an explanation for this state of affairs.

“Corruption was one of the crucial issues for Smer, through which Robert Fico gained his voters,” Mesežnikov stressed in an interview for The Slovak Spectator. “In spite of this, supporters tolerate corruption scandals by this ruling party.”

According to these experts, the last quarter of 2008 was marked by “creeping but systematic undermining of some basic rights, like freedom of speech, the right to information, and freedom of association because of the actions of public bodies”.

In the legislative and legal sphere, IVO labelled as problematic the passage of laws which declare the merits of historical figures.

“By passing such laws, the value of serious historical research is diminished, or unfavourable conditions for writing unbiased historical studies are directly created,” the assessment report states.

Steps taken by some institutions like the courts or the prosecutor’s office have, in some cases, provoked doubts about their independent decision-making and verdicts, according to IVO’s assessment, as the principle of equality of citizens before the law was not observed. IVO also found a strong limitation on the ability of citizens to influence the decisions of executive bodies. Some of those bodies also attempted to prevent the public from accessing information. IVO called these factors grave indicators of a trend in deterioration of the quality of democracy in Slovakia.

The assessment of IVO experts states that the competencies of an institution with the mission to improve the social situation of a specific group of citizens was weakened when, in November, the authority of the Office of the Plenipotentiary of the Slovak Government for Roma Communities was limited in the sphere of project financing, and other areas.

On the other hand, authors of the assessment positively noted changes in the area of anti-discrimination policy, which were initiated by the Ministry of Justice and resulted in recently passed amendments to the Anti-discrimination Act, the Code of Civil Procedure and the law on court procedural fees.

In the chapter about the media, authors Mistríková and Tomáš Czwitkovics warn that an excessive degree of friendliness between representatives of television stations and the government in the process of digitalisation may have a negative impact on the independence of the media.
“It greatly reduces the credibility and independence of the television industry,” they write.

The experts consider a bill amending the Act on State Language, proposed by the culture ministry, to be a potential tool for limiting freedom of speech. Under the proposed amendment, fines from €100 to €5,000 could be levied after July 1, 2009 for violating rules for correct use of the Slovak language in public life.

The proposed amendment has several critical problems, Mistríková stressed for The Slovak Spectator.
“Some of them are even unconstitutional in my opinion,” Mistríková said. “Financial penalties are absurd and, in the end, they can even destructively influence the language itself."

“Even the existing language law has many mistakes, its conception is very unfortunate.”

The law was designed in autocratic era, when Vladimír Mečiar was prime minister, Mistríková said.
“This is surely the reason why the language law is practically impossible to rewrite in the form of a modern European law," she added.

However, Culture Minister Marek Maďarič is convinced about the positive impact of the proposed amendment as well as the whole language law.

“Our Slovak language, which today is the state language, is perhaps the most precious thing we have as a nation,” Maďarič told Slovak Television in November last year. “Our predecessors were always aware of this but today some people tend to forget it.”

The current government has the tendency to regulate financially lucrative services, provided, for instance, by the Slovak postal service or by retail chains, even at the cost of conflict with EU institutions, writes IVO, in its chapter about international relations.
“It seems that now the Slovak government perceives EU membership mainly from the point of view of pragmatic calculations, which have rather the form of short-term profits and benefits,” the authors of this chapter, Martin Bútora, Vladimír Bilčík, Tomáš Strážay and Vladimír Tarasovič write.

A fierce assertion and strong advocacy that all geographical names must be in their Slovak form in school textbooks for Hungarian language pupils is a violation of a citizen’s right to education in his or her mother tongue, to freedom of speech, and the right to receive information in a minority language, according to authors of this chapter, Janka Debrecéniová and Kálmán Petőcz.

It is noteworthy that respect for human rights is much more sensitively perceived by citizens of ethnic Hungarian origin than by those of Slovak nationality.

According to Mesežnikov, this perception is connected to changes in society’s mood.

“Nationalism has been spreading. The ruling coalition nurtures an ethnic stance to all issues,” Mesežnikov said.

Oľga Gyárfášová expressed her opinion that this was because the Hungarian minority has sensed that their minority rights are being threatened ever more aggressively.

“The current ruling coalition has mainly created this sense verbally – by questioning their civic loyalty through various accusations and, often, by insults to the representatives of ethnic minorities,” Gyárfášová told The Slovak Spectator.

The case of Hedviga Malinová has not only become “the personalisation of ethnic hatred, but also the insecurity felt by a citizen when facing state power,” according to Gyárfášová.

Two years ago, Malinová reported that she had been beaten up by two young men in the streets of Nitra merely because she was speaking in Hungarian. Though pictures of her bruised face have been published, the police concluded their investigation by announcing that Malinová had fabricated the whole incident and accusing her of perjury. Further investigation of her case has not been completed.

Mesežnikov pointed out that, based on IVO’s polls, a large number of Slovaks are convinced that Malinová either faked the beating or lied about it.

“Had something like that happened to a Slovak in a Hungarian environment, then it could be supposed that the perception would have been different,” Mesežnikov opined.

A paradox in opinions

Gyárfášová noted a certain paradox in this poll between the opinions of experts and the general public.

For example, things have occurred that are precarious to the development of Slovak society, or at least should be noticed: corruption and party cronyism have begun gaining huge dimensions, according to Gyárfášová.

“On the other hand, the public is satisfied, as it assesses the economic and social situation as good,” Gyárfášová continued. “For most inhabitants, their civic satisfaction is determined mostly by material satisfaction, everything else remains marginal. In a long-term perspective, we can see some kind of ‘extremism’ in the moods of the Slovak public. Several years ago, Slovaks were European champions in pessimism; today, most of them are on the very opposite pole – and this does not always correspond with the real economic situation.”