THE SLOVAK crown has officially disappeared from circulation. Since January 16, the last day on which Slovaks were able to pay for goods and services with crowns, holders of the now-antique currency have had to take old coins and banknotes to banks in order to exchange them for euros.During the first weeks of January banks turned into bureaux de change, exchanging kilograms of Slovak crowns for new currency. Even though they reported no technical or other problems they occasionally had to face odd requests, such as changing a wash basin or a bucket full of coins, or handling wet banknotes. 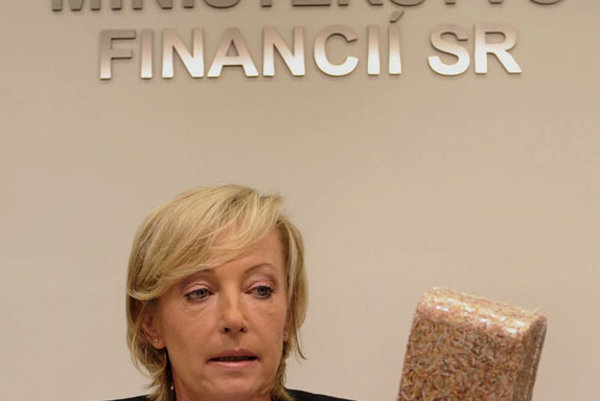 THE SLOVAK crown has officially disappeared from circulation. Since January 16, the last day on which Slovaks were able to pay for goods and services with crowns, holders of the now-antique currency have had to take old coins and banknotes to banks in order to exchange them for euros.
During the first weeks of January banks turned into bureaux de change, exchanging kilograms of Slovak crowns for new currency. Even though they reported no technical or other problems they occasionally had to face odd requests, such as changing a wash basin or a bucket full of coins, or handling wet banknotes.

But banks were rewarded with a record increase in deposits from people bringing in their life savings, until then - presumably - hidden under mattresses.

“The introduction of the euro, including the period of dual circulation, went smoothly and without any systemic problems,” Igor Barát, the government’s plenipotentiary for adoption of the euro said on January 19, as quoted by the SITA newswire.

Barát labelled the whole process the most extensive organisational-technical project in the history of the Slovak Republic.

By January 16 the National Bank of Slovakia (NBS) had withdrawn 79 percent of Slovakia’s former currency from circulation. Still outstanding is €1.07 billion (Sk32.07 billion) in the form of more than 70 million banknotes and 554 million coins.

The central bank estimates that a large portion of these is in safe deposit vaults in banks. In addition, some Slovak crowns are abroad and people have also kept some banknotes and coins for nostalgic reasons.

“We estimate that roughly 93 percent of all the banknotes will return to us by the end of the year, while in the case of coins it should be about 63 percent,” Milena Koreňová, a member of the NBS bank board said, as quoted by the SITA newswire.

Many people followed the instructions of the central bank and took their life savings to commercial banks. The banks had automatically converted all amounts held in accounts and on deposit to euros on January 1. Commercial banks also sought to attract potential clients with saving products offering advantageous interest rates or special offers in which interest was paid in advance. These resulted in record increases in bank deposits.

“During the final quarter of 2008 Slovenská Sporiteľňa [SLSP] reported the highest increase in savings by citizens in its history, up by almost Sk30 billion,” Štefan Frimmer, a spokesperson for the bank, Slovakia’s biggest, told The Slovak Spectator. “The highest number of deposits arrived in the bank in December, with over €0.56 billion (Sk17 billion) paid in.”

From the start of October 2008, the total value of money deposited in SLSP’s term deposits and accounts rose by 17 percent to €6.4 billion (Sk193 billion).

“For comparison, in 2007 the volume of deposits rose by 4 percent during the final quarter of the year,” said Frimmer.

Other banks reported record deposits too. People brought €0.81 billion (Sk24.5 billion) to another bank, VÚB, during the final three months of 2008, of which December deposits accounted for more than a half.

“Private clients deposited as much as €0.47 billion (Sk14.2 billion) just in December, a sum which almost equalled the aggregate deposits for the previous 11 months,” Elena Kohútiková, head of the VÚB Bank Euro Committee said. As much as 75 percent of this money went into time-limited deposits with clients preferring accounts fixed for one year, the bank wrote in its press release.

While the whole transition process went smoothly, clerks at some bank branches needed muscles to change crowns for euros.

Frimmer told The Slovak Spectator. “Coins dominated, and it is worth noting the receptacles which clients have been using to bring in their crown coins. In the Žilina Region, a client arrived with 18 baskets full of coins, whose value exceeded €3,319 (Sk100,000). Our employees have also reported clients bearing coins in a wash basin and a crate.”

“Another client wanted to exchange Tuzex bons [vouchers used during the previous communist regime] for euros,” said Gandel. “One client brought wet banknotes, explaining that for security reasons he kept them in a well. And a Swiss tourist was insistent that our employees exchange her euros for the local currency. It was only with some difficulty that they managed to explain to her that the euro is now the national currency in Slovakia.”

VÚB reported the highest number of coins brought in by a client, to its branch in Bratislava’s Petržalka district. His shipment was stored in six five-litre canisters and consisted of 64,000 coins, of which only 1,900 were ten-crown coins.

Another VÚB client brought in banknotes worth €66,388 (Sk2 million) in a shoe box. And a vegetable saleswoman brought in crates normally used for sauerkraut containing 8,000 50-haller coins.

“People also brought money into the bank in plastic bags, glass jars, piggy banks and we also recorded a case of a man, accompanied by his family, who brought travel bags into a bank branch containing 100 kilograms of coins,” VÚB reported.