SLOVAKIA’s entry to the eurozone and the global economic crisis are mentioned as two reasons why many Slovaks who have been working abroad for an extended time are now thinking about returning home and finding their place in the Slovak labour market. 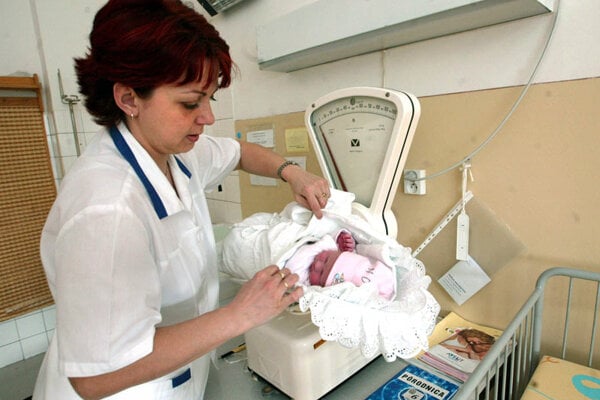 SLOVAKIA’s entry to the eurozone and the global economic crisis are mentioned as two reasons why many Slovaks who have been working abroad for an extended time are now thinking about returning home and finding their place in the Slovak labour market.

While this might cause higher unemployment in some places, there are many workplaces where the return of skilled human resources would be more than welcome. Health- care facilities are certainly among them.

A lack of human resources, especially of nurses, has been troublesome for about 15 years in bigger cities, mainly Bratislava and Košice, and for around seven years in smaller towns around Slovakia, said Ivica Gulášová from the Slovak Association of Nurses and Midwives where she is the head of the section of nursing teachers.

Low salaries in health-care institutions in Slovakia are one of the frequently mentioned reasons for leaving, but nurses also say they leave because of the psychological and physical pressure of the work.

Some nurses search for better salaries and working conditions in foreign countries to the west of Slovakia or some leave to run private nursing services. The experience of Gulášová, who teaches at the private St Elisabeth University of Health and Social Sciences in Bratislava, is that about 50 percent of her full-time students leave the country after graduation. Austria, Germany, Switzerland and Britain are the most common destinations.

“When a student tells me she has a lesson at a language school in the evening, I immediately know she will leave [for abroad] after she graduates,” Gulášová told The Slovak Spectator. And after Denmark opens its labour market to Slovaks in May of this year, the problem may even grow more as that country is known to lack health care professionals.

Before it became a member of the EU, Slovakia’s system of education relied primarily on secondary schools to train health-care professionals. It was not the best approach because young girls, not yet professionally or psychologically mature, were expected to do the vital work of a nurse, which in today’s system is highly demanding professionally and from the human side, according to František Mateička, the dean of the Faculty of Health Care and Social Work at Trnava University.
European standards require a first-level university education for nurses and an additional Master’s degree for nurses in managerial positions. Secondary schools offer study programmes with final examinations for health-care assistants, but these do not meet the requirements for a nurse who is expected to be a competent and well-prepared partner for a physician, Mateička said. To become this important partner, nurses must learn the so-called nursing process method which enables them to approach each patient individually.

“While medicine tends to heal illnesses, nursing heals the whole person,” said Gulášová who teaches the nursing process method at her university. When this method is followed, a nurse will complete a case history of the patient: biography, previous illnesses, as well as stressful moments which may play a role in the development of an illness. For these reasons, a nurse needs to have knowledge of psychology and pedagogy and use good communication skills.

In addition, a great deal of administrative work is required from nurses, since they must record everything important during the treatment process.

This nursing process method is great, but if it is to be done properly it requires a lot of time, and the low number of nurses in many departments makes it difficult, Gulášová said. Even if a nurse wants to communicate more and take better care of a patient, sometimes it cannot be done due to a lack of health-care assistants who are supposed to care for the patient’s basic needs so that the nurse can do the highly skilled work, such as administering drugs to patients, giving infusions, stitching wounds, and the like. But according to Gulášová, the system of multi-level health care is simply not working properly in Slovakia. Without an adequate number of health-care assistants, a nurse ends up doing the skilled duties, plus the basic care like feeding or positioning the patient, plus the administrative tasks.

“In the beginning [the nurses] often see the lack of time for the patients as their failure, but after a while they get to understand that it’s not them who failed, but rather the system,” Gulášová told The Slovak Spectator, adding that despite that understanding, nurses often become frustrated and many of them end up being repeatedly burnt out.

The second decisive reason for nurses to leave, following burn-out, is their salary level, which depends on the character of the nurse’s health care institution.

The average salary of a nurse working in a health ministry hospital was about €760 (Sk23,000) in the first quarter of 2008 and nurses in hospitals operated by a self-governing regional authority earned about €530 (Sk16,000), the TASR newswire wrote.

Since 2006, the salaries in Health Ministry institutions have been increased four times and the Ministry of Health wants to maintain this trend, minister Richard Raši told The Slovak Spectator. Salary is not the only motivation, but it is surely the strongest one, he added.

In Gulášová’s opinion salaries in health-care institutions should be made equal with, for instance, the army.

“The army, soldiers and police are privileged – if there are the same privileges for nurses and physicians, their outflow would definitely slow down,” she said. In practice, it means nurses and physicians should be paid bonuses for staying. Their employers should also give them opportunities for free-time activities. They should also be provided with good pensions, just like soldiers and police officers, who retire early with decent pensions, Gulášová said.

With proper earnings and a promise of a decent pension, it would be possible to have stricter requirements on nurses.

“At the moment we cannot reproach nurses for anything, because if you fire a nurse, another four health-care providers will fight to hire her,” Gulášová said. Health care in Slovakia thus is a vicious circle: nurses leave because they are under pressure, but as more of them leave, the more pressure there is on the others. Increasing the number of nurses and health-care assistants is the only way out, according to Gulášová.

Raši claims that the ministry has registered a return of nurses and physicians from the neighbouring Czech Republic and, at the same time, the number of those who are leaving Slovakia has fallen slightly. According to Gulášová, nurses in the Czech Republic have good working conditions and they are well motivated; for instance, many employers contribute extra money for their recreation costs. On top of that, the multi-level health-care system works well in the Czech Republic, unlike in Slovakia, Gulášová said.

She does not see a solution in attracting Ukrainian or Romanian nurses to Slovak hospitals.
“It takes them a while to understand our traditions, habits, religion,” she says, adding that health care is an institution where traditions and habits matter a lot. A hospital first needs to invest in these nurses by providing language training, but the problem is that the nurses then leave for farther west after a couple of years and the investment goes down the drain, Gulášová explained.