THE TSUNAMI-LIKE economic crisis which rolled across the Atlantic and began to swamp western Europe last year has now hit Slovakia harder than market watchers and state officials had been expecting. Rosy predictions have disappeared as both Slovakia’s industrial giants and the state budget shift gears to meet the crisis. The country even has a crisis council now, and other signals suggest that the situation is serious. 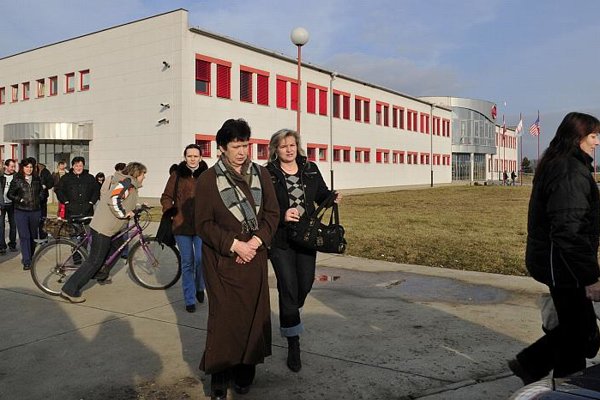 THE TSUNAMI-LIKE economic crisis which rolled across the Atlantic and began to swamp western Europe last year has now hit Slovakia harder than market watchers and state officials had been expecting. Rosy predictions have disappeared as both Slovakia’s industrial giants and the state budget shift gears to meet the crisis. The country even has a crisis council now, and other signals suggest that the situation is serious.

After nine years of doing business in Slovakia, car component producer Molex is closing its factory and moving out of eastern Slovakia’s Kechnec industrial park: a response, it says, to a rapid decline in demand from the car industry. An estimated 1,000 people will lose their jobs.

It is far from the only mass layoff witnessed in Slovak industry. Slovakia’s labour authority estimates that the number of people who could lose jobs in major cutbacks might reach 16,000.

The mood in Slovakia’s economy is the bleakest since 1997, as measured by the Slovak Statistics Office’s economic sentiment indicator, which fell 3.1 percentage points from December, 2008, to 79.1 points. The statistics authority ascribes this to the sinking confidence indicators in industry and the construction sector, which dropped 21.5 percentage points year-on-year, pushing confidence 21.3 points below its long-term average, the SITA newswire wrote.

Prime Minister Robert Fico said that the goal of his government will now be to preserve employment and social programmes at any expense. He suggested that the government will have to allocate financial support to some sectors, but that it would not go down the route of cutting taxes.

“We are entering crisis mode, in which everything can be modified,” said Finance Minister Ján Počiatek, as quoted by the Sme daily.

While market watchers and the opposition agree with the government’s objective of preserving employment, they have a different view on how it could be achieved: tax cuts and flexible employment legislation.

The prime minister has admitted that some of the crisis first-aid measures might inflate the general government deficit.

The Fico team’s proposals include a €300 million financial package to support employment, an appeal to banks to provide state-guaranteed loans, pressure on gas company Slovenský Plynárenský Priemysel (SPP) to lower its prices to businesses and use of funds currently earmarked for towns and villages to fight the crisis. The government could agree to ease labour laws.

A recently founded crisis group, which includes representatives of the central bank, banking sector, trade unions, employer associations and the Slovak Association of Towns and Villages (ZMOS), will work towards maintaining economic growth at a high level, according to Fico.

The country’s parliament too is ready to pass legislation in a fast-track legislative proceeding, said Speaker of Parliament Pavol Paška.

In January, the European Commission (EC) sharply reduced its forecast for Slovakia’s economic growth and now expects the country’s GDP to increase by 2.7 percent this year - as opposed to the 4.9 percent it predicted in its autumn 2008 forecast.

One of the government’s goals, Fico said, as quoted by SITA, is to keep Slovakia among the five fastest-growing economies of the European Union.

The government adopted an earlier package to tackle the economic crisis last November. It included measures such as more effective use of EU funds, loans for small and medium-sized businesses, support for applied research and innovation, public spending cuts, a push to influence the pricing policies of energy companies and preferential treatment for domestic suppliers.

But observers say implementation has been limited. Richard Ďurana, Director of the Institute for Economic and Social Studies (INESS), said he could not list any of the measures as having been carried out – apart from an increase in the state guarantee for loans to small and medium-sized businesses from 50 to 55 percent.

“Even in the case of this measure I am rather sceptical,” Ďurana told The Slovak Spectator.

According to Ďurana, increasing the size of the state guarantee for loans might lead to support being given to projects that are riskier than a crisis period would justify.

“In this way the government is transferring the risks of unsuccessful projects to all citizens,” Ďurana added. “Overall, I think that the effect of governmental measures - if it can be measured at all - is minimal.”

Ivan Štefanec, an MP for the opposition Slovak Democratic and Christian Union (SDKÚ), shares Ďurana’s opinion that the government’s measures do not seem to be working, since the number of layoffs have been growing.

The SDKÚ has urged the government to involve opposition parties in the debate to seek solutions to the crisis.

However, the tools chosen for achieving these goals are important, Ďurana added.

“During an economic slowdown it is very important to have the most flexible labour market possible, which can promptly adapt to the restructuring of the economy,” Ďurana said. “It is important that businesses in the private sector, which takes the largest share of GDP creation - more than 90 percent - have the best conditions for doing business.”

One other benefit of a flexible labour market is that it keeps Slovakia attractive for foreign investors, Ďurana added.

“It is also important that these measures are followed by cuts in government expenses because the output of industry is now expected to be lower than it was at the time that the state budget was approved, representing a drop in the income of the government and thus a rise in the [budget] deficit,” Ďurana said.

Štefanec too agrees with the government’s instinct to make preserving employment a priority, but he said that to do this it should first of all unbind the hands of those who are providing jobs.

“This means lowering direct taxes, unifying taxes and payroll taxes, and tax and payroll holidays for new tradesmen,” Štefanec said. “It is important to make the market flexible so that the ones who are providing jobs can promptly react and those who want to work can use suitable forms of labour.”

The question of whether the government should be active in providing financial assistance to troubled companies or leaving the solution to the market itself is also a serious one.

Ďurana does not believe that providing stimuli to selected companies is the most effective way of solving problems emerging during the economic crisis.

“It is selective support and finances used in this way might be denied to other, more effective branches of the economy,” Ďurana said, adding that he prefers solutions from which all businesses can benefit.

As for the shelter the euro can provide, Ďurana says that also this is a coin with two sides.

“On the one hand, the euro protects citizens’ savings from the devaluation we see happening in neighbouring countries, which make Slovaks relatively wealthier; but on the other hand, it might be causing problems for exporters and in the eyes of foreign investors increase the price of labour in Slovakia when compared to the Czech Republic, Hungary or other countries, whose currencies are weakening,” said Ďurana.